I'm hoping that I will be able to draw one entire Alphabooks theme from the collaborative Dungeon comics (Donjon in the original French) co-authored by Lewis Trondheim, Joann Sfar, and a bunch of other great French cartoonists.

If you've never read any Dungeon at all, you can get started here.

In the very first volume of the series—indeed, by page four—you will meet two relatively minor characters whose names start with A: 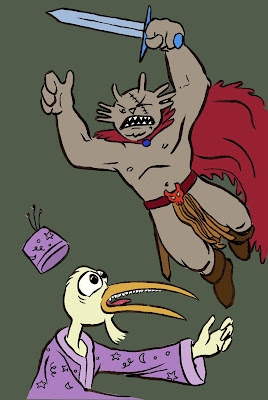 That's Alcibiades the Gnomonist there at the bottom, who can normally be found managing the network of crystal balls that the Dungeon employees use to communicate.

Attacking him is Ababakar Octoflea, Prince Without a Principality, Whose Sandals Stomp on the Tombs of Kings, bearer of the Sword of Destiny. He dies a brutal death on page five.

But his death opens the path of heroism that defines the life of one of the series's main characters, and because of the weird chronology of the Dungeon books, you can also meet Prince Ababakar Octoflea in the first volume of Dungeon Monstres.
Posted by Isaac at 4:29 AM

These are great! Believe it or not, despite my love of BD, I've never read any of the DUNGEON series. I need to get on that!

Fabulous flying fez & fierce 'flea! If these names are any indication I'm going to love this series.

Re: names--while I have not had the pleasure of reading any Donjon volumes in French, I can tell you right now that "Octoflea" must be an attempt to render the name "Octopuce," which would be a homophone for the normal French word for octopus (spelled "octopus") but which includes the normal French word for flea (i.e., "puce"). As great as Dungeon is in English, and as visually awesome in any language, I think it's bound to be verbally richer in its original French. (Actually, it might be visually better, too, since the French albums tend to be bigger than the English-language versions!)

Leah and Ben, let me say that I wholeheartedly recommend Dungeon, though not necessarily for kids. There's a particular volume of Monstres, indeed, that more than lives up to the title. But I can hardly think of a comic that I find more inspiring or more engaging than Dungeon.

Ben: you will especially want to get the Early Years volumes, as they're illustrated by your fave Christophe Blain.

I was counting on Mike to make a comment on "Octopuce" vs. "Octoflea," since he had pointed it out to me years ago. I'm sure that's not the only way Dungeon suffers in translation. (I really can't stand NBM's computer lettering, for example, though I know they're doing their best.)

...and another thing: I think that this image solves the problems of static hovering that plagued the image of Hezekiah Sugata attacking Isaac Trondheim back in a much-loved (by me) Doodle Penance image:

I've never read that...maybe I should get it for AZ

Lupi, let me repeat that there are definitely Dungeon books that are not suitable for kids. There's a fair bit of sex in the Early Years books—I mean, not flagrante delicto, but definitely steamy nudity—and in some of the Monstres and Twilight volumes as well.

I mean, none of it (except one volume illustrated by Killoffer) is in bad taste or upsetting, but you might find yourself having to explain things you didn't intend to explain to AZ yet, if you gave the books to her without checking them over first.

Thanks, if I get them I'll be sure to screen everything.