Recently I was in Israel and then Hungary to celebrate Passover. In both places, my uncanny comics-sense tingled to alert me to the location of comics stores and to direct me to various celebrations of comics and cartoons. I'll say more about my Hungarian comics experience in a later post. And I suspect that the Israeli comics will take more than one post to address. For now, though, I just want to offer a quick tour of some of the unexpected sightings--and sitings--of comics in Tel Aviv and even, to my astonishment, in Tsfat.

In Tel Aviv, my wife Becca and I hadn't walked two blocks away from lunch on my first day there before I saw these familiar characters on a wall: 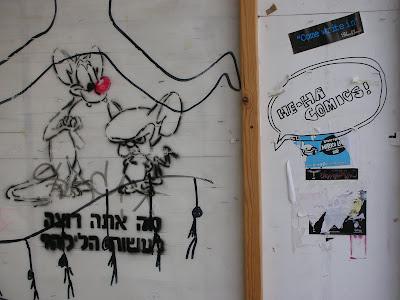 The caption asks, "What do you want to do tonight?" I think we all know the Brain's usual response to Pinky's question. (You may also note the word balloon to the right, reading--in English--"He-ha comics!")

Elsewhere on our stroll, we saw another familiar comics character, the golem, looming above a well-cartooned bird and elephant: 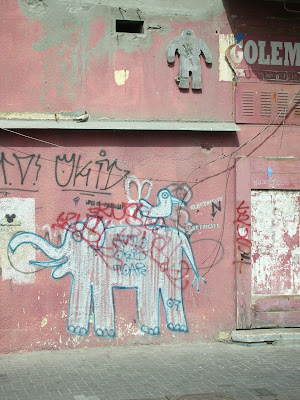 On Rothschild Avenue, the vaguely doglike mascot of a restaurant seemed kin to Kim Deitch's Waldo: 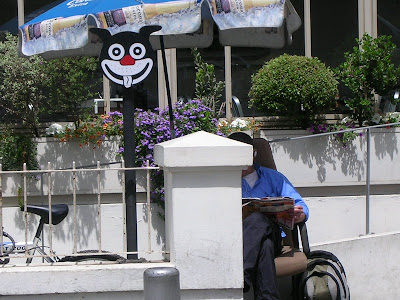 It was Becca who spotted the comics-themed shirt on sale at Sabotage Fashion ("Sabotage art, fashion comics..."): 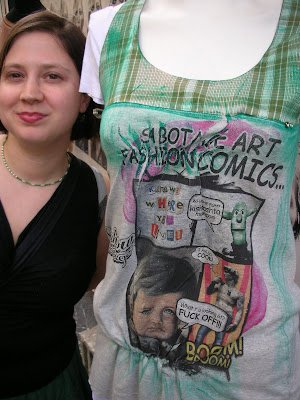 Inside the store, we were confronted by this unhappy fellow: 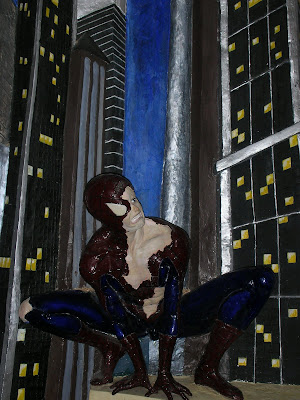 A happier young woman at the store informed us that she, herself, made comics, and she gave us directions to a nearby comics store, Comics Ve-Yerakot (Comics and Vegetables): 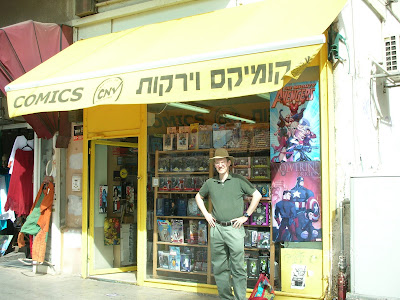 A glance at the photo will show that the comics for sale at CNV are mostly of the American superhero variety, but we did manage to find a couple of Hebrew-language works of great interest: a (semi?-)autobiographical series, by a religious Jew who teaches typography at a secular institution, that interweaves his life story with the allegorical stories of the chasidic master Rebbe Nahman of Breslav; and a hilariously scatalogical Passover haggadah, whose text is orthodox but whose illustrations are anything but (and whose redefinition of "the Promised Land" will be documented in a later installment).

We had to go to a proper bookstore, Sipur Pashut (A Simple Story) [English-language link], to find works by members of the Actus group (including Rutu Modan, whose original English-language graphic novel Exit Wounds has won a lot of acclaim)--and to get a proper introduction to the work of Dudu Geva, who, according to Naomi Simantov at Ha-Aretz, "is considered by many to be the founding father of the Israeli comics culture." We had, in fact, seen his name earlier in the day without recognizing it, on the cover of a comic posted in a store window: 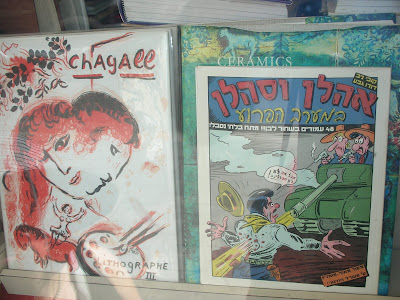 This comic is titled "Ahlan and Sahlan in the Wild West," and it features "unendurable suspense!" I'm guessing that "Ahlan" and "Sahlan"--whose names are derived from an Arabic phrase of welcome--are the two characters filling "John Sterling" full of holes there (actually, he protests "But I'm not John Sterling!", for all the good it does him). Dudu Geva is listed as one of the featured artists in this 48-page black and white spectacular, which is "Highly highly (not) recommended by the Office of Education."

So who is--or was--Dudu Geva? A first glance at his work shows traces of R. Crumb and even Gary Panter, but I'll know more once I've ploughed through more of Pesher ha-chayyim (The Meaning of Life), the thick tome that accompanied a posthumous exhibit of his copious and diverse output. I know this much, however: his best known character was a cartoon duck known simply as the Duck (Ha-barvaz); and the day before I arrived in Tel Aviv, a gigantic inflatable version of Ha-barvaz had been erected atop the municipal building in Rabin Square. For more details on this event, I refer you to this article in the Jewish Chronicle; or you can look at this picture I managed to snap from a bus as it whizzed past the square: 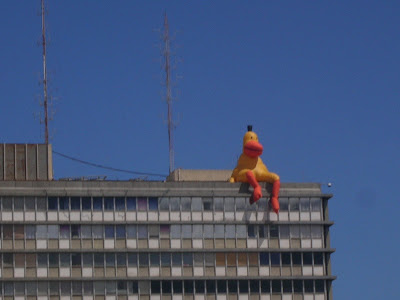 A closer look at the Duck on the roof may be seen here. And here's a glimpse of Geva's cartoon version, from a flyer announcing the unveiling of the statue and a celebratory concert and party at a Tel Aviv nightclub (alas, we arrived just as the party was ending): 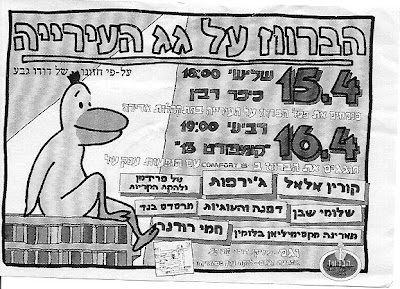 A few days later, we stopped in the mystical city of Tsfat (also known as Safed, from its Arabic name). We were mostly looking for famous old synagogues, but even in this town full of chasidim and pious Jews of all sorts there were cartoons to be found, if only of the graffiti variety. Here, for instance, is a sketch of a familiar face in Tsfat: 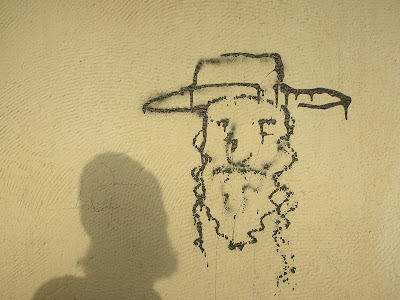 Elsewhere in Tsfat, we saw this curious mélange of word and image: 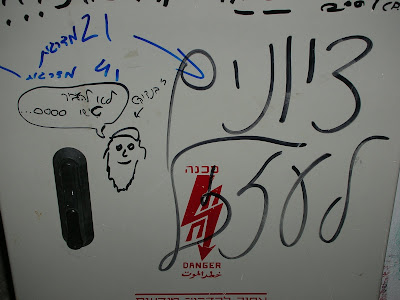 The smiling guy with the beanie is labeled "Rabbi Benedict," which isn't so common a name among Jews these days (Spinoza was excommunicated by the Jews of Amsterdam, you will recall, though there are a number of Barukhs around--"Barukh" and "Benedict" both meaning "blessed"). I can't quite figure out what he's saying, unfortunately (feel free to use the comments if you can explain what he means); but I can read the big black slogan clearly enough. It says "Tsiyonim le-`Azazel": Zionists go to hell!

I found it mildly ironic to see this slogan, in Hebrew, after my encounter with a teenaged chasid whom I asked for directions to one of the famous synagogues. In keeping with typical chasidic practice, he wore clothing frozen in a time warp from pre-twentieth century eastern Europe; but when I asked him if he spoke Yiddish--which I speak better than Hebrew--, he shook his head no. [Edit: for a clarification of the ironies in this encounter, see the first comment on this post.]

Yes, even in my lighthearted survey of comics culture in Israel, politics will not be denied. I will, however, let one last cartoon image from Tel Aviv have the last word, from a weird little store-window display of underwear and other sundries: 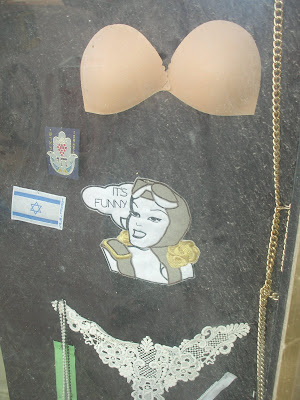 I should perhaps clarify the irony in my encounter with a Hebrew-speaking chasid in Tsfat alongside a Hebrew graffito telling Zionists to go to hell. The graffito was almost surely written by a chasid--the population of Tsfat today is almost totally Jewish and largely chasidic, and the anti-Zionism of some branches of chasidism is well known and quite sincere. But is there any chance that this teenage chasid would have been speaking modern Israeli-accented Hebrew and not Yiddish (or at least Ashkenazi Hebrew) if the era matched his attire? No.

Once, there was an English-language comic that appeared on the back cover of a weekly called Olameinu ("Our World") that was distributed to high-school age kids who attended orthodox seminaries. Happened to think of that comic (the only part of the weekly that I actually read, er, religiously) as I read Mike's post.

Have no idea if Olameinu is still published but, thanks to the magic of the "Internets," I did manage to find one comic on line, enough to give an idea of what it was: basically, a comic version of Buber's "Tales of the Hasidim." See here:

Matt, thanks for that unexpected but most welcome link! I'm sure that if the story of Saul Wahl (as he is also known) were told in comics form today, the green dog would feature prominently in the visuals.

I'd heard of this king-for-a-day character, but this is the fullest account I've seen up till now. It might amuse you to consult the following old New York Times Book Review article (also hosted on tali.com, as it happens) which details the reach of the mighty Katzenellenbogen family:

It gets bonus points for a typo that results in a reference to the "scared honor" of European aristocrats!