In April I traveled to Hungary for the first time in ten years. Ten years ago I wasn't reading comics at all, much less making them; and I was certainly uninterested in seeking out comics produced in Magyar, a language that laughs at the non-agglutinating, un-vowel-harmonious simplicities of the Indo-European or Semitic tongues with which I am more familiar.

But this time, when Becca spotted an ad for an exhibit about Hungarian comics, conveniently on view in Budapest right when we'd be there, I was keen to check it out, language obstacles notwithstanding [Edit: See comments for further links, courtesy of Becca]. We had a nice walk along the mighty Danube, passing by the beautiful Parliament building... 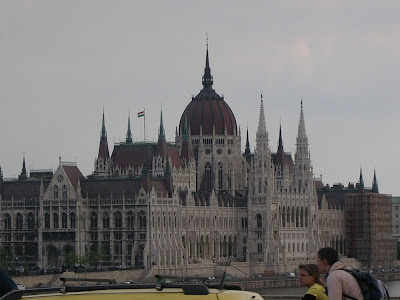 ...on our way to Margit-Sziget (Margaret Island), a big green patch of land amid the river where it widens, just before narrowing again to divide the originally separate cities of hilly Buda and flat Pest. The exhibit was being held in Holdudvar, a restaurant-artspace on the island. Here's the exterior of the site, with a banner promoting the "Frame Up" exhibit: 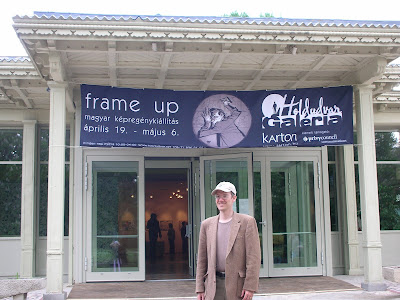 As the English-language title shows, the curators of the exhibit catered rather graciously to their non-Magyar-speaking visitors, and a number of the pages were displayed in English translation (so please do click images below to enlarge them unto legibility!). The exhibit was curated by kArton (sic), a gallery dedicated to comics in Hungary, and it featured works ranging from decades-old adventure stories and humor comics to quite recent stories that display a kind of Dark Horse Comics sensibility (by which I mean it's attractive, professional work that happily employs genre tropes without appearing to be swallowed whole by genre clichés or over-corporatized).

One of the artists most responsible for that Dark Horse Comics vibe was
Mátyás Lanczinger, whose sample pages from a detective story called "The Woman in the Yellow Wig" looked like a parody of Frank Miller's Sin City yarn That Yellow Bastard: 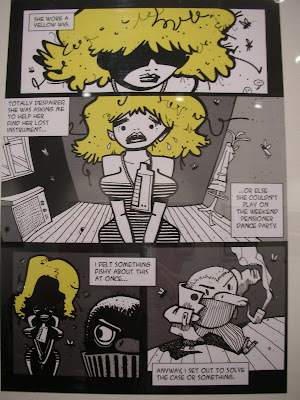 Some of the more recent work fell more in the "art comics" column, with the bulk of its interest coming from painterly techniques and whole-page composition rather than storytelling or joke cracking. Unfortunately for this post, I didn't bother to photograph samples from those art comics, both because I wanted to spare my camera battery and because I'm a philistine, apparently. Also, in my effort to record details with my camera, I haven't caught the attractive display of original pages and oversized reproductions in frames that were themselves decorated with cartoons and color. Sorry!

Anyway. Another seeming reflection of English-language comics came in artist Zoltán Fritz's story "Death and the Compass" (or "The Compass of Death," as the kArton website puts it). Based on a tale of Borges (with script credited to "Zorro de Bianco"), its details of mystical arcana (kabbalistic, in this case) and occult urban mapping recall the creepy revelations about London's wicked architecture in From Hell by Alan Moore and Eddie Campbell: 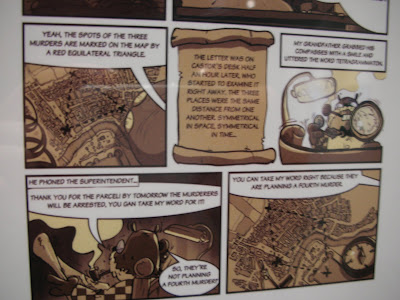 Fritz's story was serialized (in Magyar) in a Hungarian comics anthology called Pinkhell, whose pages also featured Noname by Miklós Felvidéki, likewise on view at the exhibit. In fact, both artists' stories won Alfabéta awards from the Hungarian Comic Publishers Association for "best comics short story (3-19 pages) of 2007." I liked their work enough to buy an issue of Pinkhell despite the language barrier (thankfully overcome in some measure by their visual storytelling skills and by recourse to a Lonely Planet Hungarian phrasebook). Here's a mostly silent page by Felvidéki from the exhibit, since it's the visuals that appeal to me most in his work: 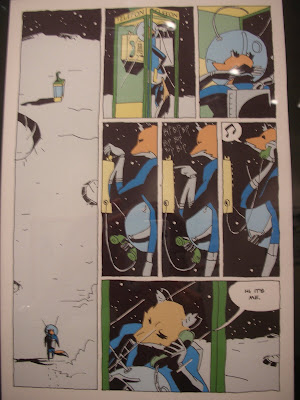 He also tied for an Alfabéta award for best cover of 2007, again featuring his fox-man from Noname: 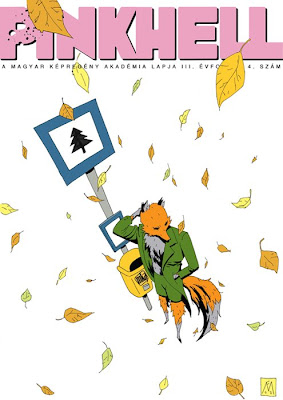 Felvidéki's skill at visual storytelling comes through in his four-page short story in Pinkhell 3 (a story that communicated its ideas quite well even before I resorted to the phrasebook to puzzle out some of the Magyar). It's a masterpiece of compression and the expressive use of color--or, rather, the narrative use of color, as color is used less to convey a mood than to connect scenes as they play out between past and present, real life and fantasy in the mind of the protagonist. Here's how the first page sets out the method of the story. In the first tier, the fox-man protagonist is speeding along in a car with yellow-green flames on the hood in the year 2007 (if the flames look insufficiently green, I apologize and blame my scanner). The car comes to a drawbridge-- 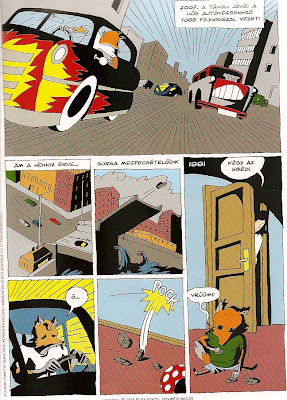 --only to crashland in 1981, as a toy car hurled by his younger self. Note the way the distinctive yellow-green of the car's hood (tinily visible in the second panel above) is transferred to the background of the fourth panel, as the fox-man realizes his mistake, before recurring in the explosive sound effect of the toy's crash against the wall. This sort of passing-the-color-baton to bridge gaps in time, place, and perspective works really well in this story, and it comes together nicely on a final page that reveals the bridge-jumping hotrod of 2007 to be still another fantasy (far from speeding away from pursuers, the fox-man is stuck in traffic; and his car doesn't have yellow-green flames: it's entirely yellow-green, and looks a little sickly).

Finally, the cartoonist whose work appealed to me the most at the exhibit was a member of the old guard, Sándor Gugi, who apparently (according to my friends at Wikipedia) got the idea in the 1950s to produce comics adaptations of literary classics in order to avoid the charge of producing imperialist vestiges of Western cultural trash. Happily for me (as my scholarship is mostly on Arthurian literature), the Gugi comics featured at Holdudvar included his playful take on Lancelot's love for Guenevere. The story is amusing, but what I really loved was Gugi's cartooning. Check out this detail of Lancelot languishing while the wizard Klingsor traps Lancelot's love in a bottle: 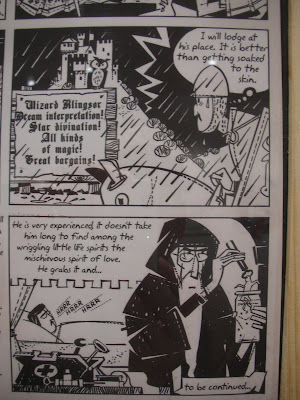 Masterful black and white, and an adorable owl. What's not to like? I'm just sorry that this story wasn't featured in the only Gugi collection I could find.

From my outsider's eyes, it looks as if the current Hungarian comics scene is in an interesting place, though the Wikipedia entry on Hungarian comics seems to take a dim view of prospects for the medium and its artists. Be that as it may, with evidence of over fifty years' worth of interesting cartooning on display in a single small exhibit, and a current anthology showcasing quite a variety of approaches, Hungary's comics just might deserve a more optimistic outlook. Perhaps in the future more of us, Magyar or not, can join together in a celebration of comics and declare: "It's all on!" 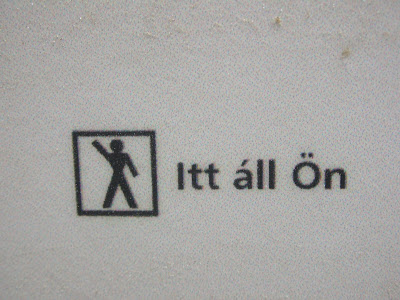 If you want to see more of what the exhibit looked like, including some of the cool frames Mike mentioned, you can go to:

and scroll down to the bottom, under the header "Képek a Holdudvarból"...

to which I say,

Inexplicably, I had trouble getting Becca's link to work at first, then I thought to click over to "Magyar" and had more success. If her link doesn't work for some reason, try this one:
http://www.karton.hu/cgi-bin/index.php?st=0&y=174&p=3&m=1

And thanks, Becca, for spotting it!

"Non-agglutinating?" I'm sure you know at least some basic Japanese. Other than that, Uralic languages are fun. Especially when they're Finnish Ducktales.

Hi!
Thanks for the post! Reading "outsiders'" thoughts is always useful, and in this case very rare. :) I saw you linked the Wikipedia article I wrote about Hungarian comics. As far as I know it's the only English resource on the topic, so I hope you found it useful.

Gugi Sándor is one of my favorites too. He's rather underrated, because he finished creating comics earlier in his life. I hope some more of his works will be reissued in the future! If so, should I let you know?

About Felvidéki Miklós: you might be surprised but the kid is 18 now, and the Noname comic you linked in is about 1 or 2 years old! :) And lucky you, it has an English translation! :D It entered the Fumetto festival competition in Luzern, where it won 3rd prize in the 13-17 year olds category.
Here's the link:
http://www.fumetto.ch/07/ausstellungen.cfm

note: for some reason the pages are in reverse order.

Zoli, thanks so much for the link to the Felvidéki story in English! I am gobsmacked to learn that he was, what, 16 or 17 when he drew that piece? I'm even more impressed by it now.

And absolutely, your Wikipedia article was extremely useful and interesting to me. Thanks for writing it and for introducing yourself (I don't think I've seen behind the Wikipedia curtain before)!

Finally, I would certainly be interested in learning about more work by Gugi* if it should become available (especially in English, as my Hungarian is, uh, pretty nonexistent).

Once again, then: köszönöm!

*Note on Hungarian names for any Magyar novices out there: Hungarian practice is to list family name first, then given names, as in Chinese. Hence "Gugi Sándor" is the authentic Hungarian way to refer to the artist I called, in my American fashion, Sándor Gugi.

Dear Mike, thanks for your report. Lanczinger, Fritz, Zorro and Felvidéki are the members of the Hungarian Comics Academy cultural association (MKA) as I am. We popularize the Hungarian comics in our magazine PinkHell and we organize comic art exhibitions in Hungary and other countries. I mentioned your post and blog on our blogsite: http://kepregenyakademia.blogspot.com/
If you are interesting in the other MKA members' work, please visit our deviant gallery:
http://pinkhellcomics.deviantart.com/
And thank you again.