Advice on the 24-Hour Comic 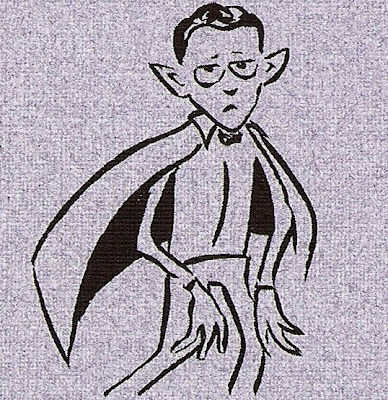 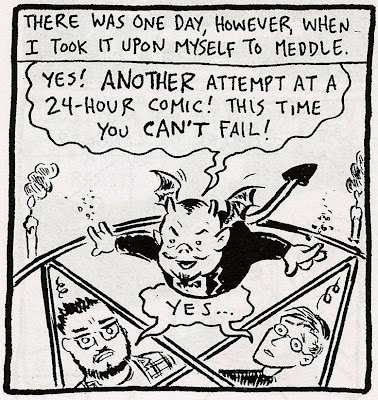 And Satisfactory Comics #7 was in some ways the closest we've come: all of the new stories in that book were penciled and inked in a single sitting of about thirty hours. That was actually only 21 pages of new comics, but I got up the next morning and lettered three pages of supplemental text while Mike knocked out the cover. So I think it counts. It sure felt like an accomplishment. 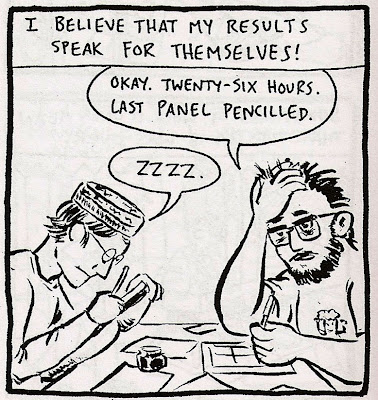 By the end of that experience, we felt ready to offer a little advice about what worked for us and what was difficult in the process. The advice appeared in the last little bit of text in Satisfactory #7, and in honor of a 24-Hour Comics Day that we're not celebrating in any other way, I'll reproduce it here. 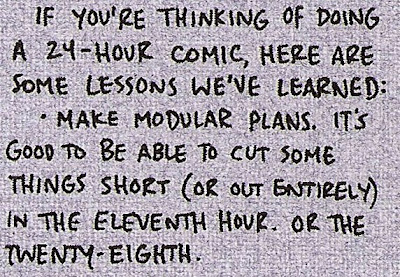 I'm surprised more people don't do this: if you're setting out to fill twenty-four pages, why not plan to fill them with an anthology of short pieces? I guess that requires more ideas, but it also means that you can bail from a bad idea quickly and move in a new direction. It even means that you can edit, if you want to, when you get ready to publish the comic as a mini.

The caffeine thing is obvious, but it's really worth thinking in advance about how to vary your drawing tools. Unless you have some perfect pen that I don't know about, your hands are going to get tired (and possibly painful) before the end of the day. Think about what you might be able to accomplish with tools you don't ordinarily use, or tools you hold in a different way. Bring a variety of drawing and inking tools—brushes, markers, construction paper and scissors, Q-Tips, whatever you think you might use in the sleep-deprived wee hours of your project. It's nice to be able to move forward while you give your hands some relief from the posture of pencilling.

And try to switch back and forth between pencilling and inking based not only on the needs of your hands but also on the needs of your inventive imagination. This was the thing about Satisfactory #7 that worked best for us, actually: up until the last few hours, there were always a few incomplete pages on the table, and each of us could always put down the page he was pencilling or scripting in order to get a brief break to think about something else. And, by the end of the day, I think we had honestly surprised ourselves with the number of things we'd come up with.

If you're out there making a 24-hour comic, I wish you fortitude, alacrity, and an unflagging imagination. Here's to many happy returns of the day.
Posted by Isaac at 10:58 AM

A few notes of my own:

First, I had no idea it was 24-hour comics day. Man, am I thoroughly out of the loop these days...

Second, I feel compelled to note that while I did draw 16 pages of issue 3 in PENCIL, they were hardly finished pages as they were still in need of inking (and I think I only inked one page, myself)--so it's not as if I was as on-pace as it sounds to terms of 16 pages in 16 hours! (Would that I had been so fast...)

Third, I also feel compelled to note that the helpful advice to would-be 24-hour-comics-artists at the end of issue 7 was all you, Kaiser. I don't think I so much as mentioned a helpful tidbit in answer to your question for further advice. (And while I'm noting things under self-imposed compulsion, I remain grateful to you for your ability to churn out well-phrased and perfectly-spaced pages of handwritten TEXT to fill the inside back cover at the end of that 30-hour ordeal. Whew!)

Fourth and last: Man, that Alec Longstreth continues to amaze!

Oh boy, I did one! It was my third successful one (out of three attempts). It's a little late for advice, but here are some thoughts anyway:

Modular plans / short pieces: My first two 24-hour comics consisted of shorter pieces (not by plan, just worked out that way), so I really wanted my next one to be one story. I spent the first hour making rough plans for it. It wasn't totally modular, but having a plan allowed me to revise as I got a sense of how much spaces things actually took up, reducing events to mere mentions in word balloons, etc. I didn't use narration, but it seems like a good way to help control how much space story elements use.

Ink only when stumped: Personally I would shorten this to "Ink only."

Work on several parts at once: Yes! This saved me. (be careful not to confuse yourself, though!) Because I took some time up front to plan the story a little, I was able to work on a different part of the story when I felt bogged down where I was. I spent the night alternating between two sections, eventually connecting them in the middle and then adding the ending.

I'd also add that having other people around is a double-edged sword - they definitely help motivate, but can also be a big distraction. I always bring music and headphones so I can work around others with less distraction (I don't use them the whole time, though). If you prefer quiet, maybe try those ear protectors people wear when chainsawing - they block out most sound.

About "ink only," Colin:

I've always been too chicken to try drawing a comic directly in ink. One of the luxuries of having two people working on the same 24-hour comic is that we got twice as many man-hours, and inking soaked up a lot of those man-hours. I guess if I ever try to do one solo, I'll have to work mostly in ink.

Huh...I'm surprised we haven't had the constraint of "no pencils" in any of our numerous rule-based comics so far. Surely we've done SOMETHING that was direct ink-to-paper??? Or has it only been bagatelles and lagniappes? (Dude, that should be the title of a sketchbook miscellany selection: Bagatelles and Lagniappes.