"Make Me a Bat": Pre-Orders

I'm pleased to announce that all the drawing for my Halloween micro-minicomic is finished.

Here's a glimpse of the cover of the "dummy" I printed here at home. The color is not final. 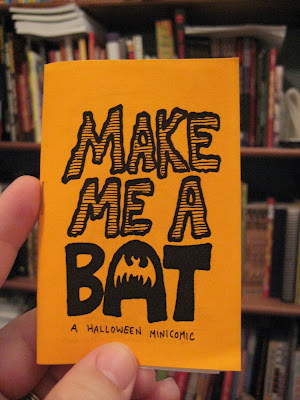 The comic features a little boy who wants to dress up as a bat for Halloween. Unfortunately, his parent (who is only ever an off-panel voice) seems to have a perverse sense of hearing: 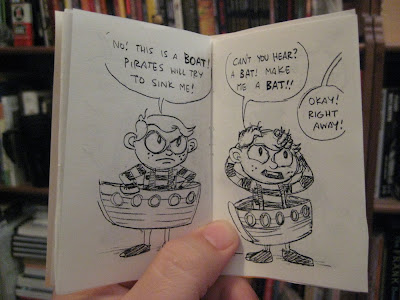 Most of the comic consists of the boy finding himself in costumes that almost sound like "bat" costumes. I think the results are pretty cute. 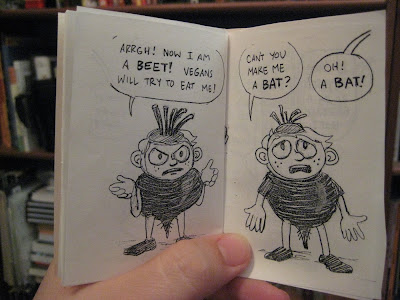 And I don't think I'm spoiling much by telling you that the comic has a happy ending: the little boy gets a great bat costume on the last page, and a fold-out inside back cover lets him go out trick-or-treating in it. 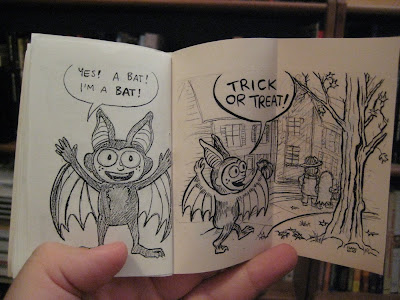 The idea is that I'll hand these out to trick-or-treaters along with candy this year.

I'm planning to go down to Kinko's to print a bunch of these this weekend, so I can send them to the Trees & Hills Halloween Comic Swap with plenty of time to spare. UPDATE: I have taken the book to Kinko's, so I'm closing up the pre-orders for the time being. I'll make a new post when I get copies back.

The book has sixteen interior pages, and the vocabulary in it is deliberately pitched at kids who are still learning to read.
Posted by Isaac at 3:11 PM

The wife and I agree that the final vespertilian bat-costume is totally cute!

And while the kid is right to worry that vegans would eat him if he looked too beet-y, the lacto-vegetarians are liable to make him into a borscht with a dollop of sour cream I'M JUST SAYIN'.

Hi Isaac! Can't wait to see in in print. I'm working on mine right now to make the deadline. And after that coincidentally I'm planning on making Thomas a bat costume.
I've got my site up and running at glynnisfawkes.com
Mostly comics of kids.