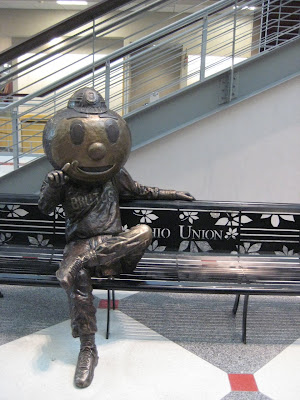 I'm attending the 2010 Festival of Cartoon Art at Ohio State University, where I gave a paper this afternoon on the backgrounds in Krazy Kat. There was an entire panel devoted to Krazy, in honor of the title character's 100th birthday. 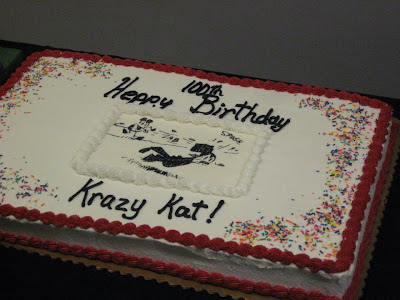 And there was a cake at the reception.

I enjoyed the panels today, which taught me about a few comics I'd never heard of before (Scuola di Fumeto looks interesting; the post-Herriman Krazy comics from Dell and Gold Key look like a sacrilege), and I learned new things about comics I'd heard of. (Peter Sattler's presentation on Mutt and Jeff was really eye-opening, especially his description of the inset comic called "Bolsheviki," which seems both harrowing and hilarious. I was also really stunned at the research on display during Michael Tisserand's keynote talk. His forthcoming biography of Herriman is obviously going into my wish list.)

During the conference, as usual, I doodled. Here's a poor likeness of Damian Duffy, scrawled out during his talk on Moore and Gebbie's "This Is Information." 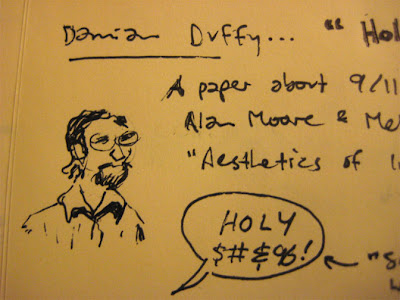 And here's a quick cartoon of one of the most memorable moments in the conference so far. After Toni Pape's interesting paper on Scuola di fumetti, which was sort of heavy with theory jargon but showed some "metaleptic" effects that really exploit the language of comics, there was a pause in the question-and-answer period. The established comics-scholar eminence R. C. Harvey raised his hand, and said, "I have a question for Toni." 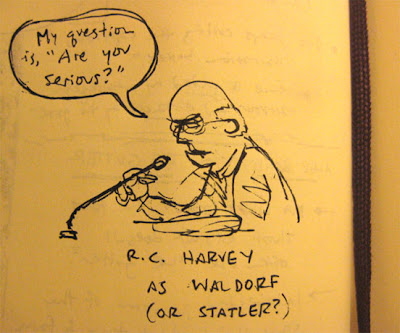 It's hard to know how to answer a question like that. It was clear that Bob Harvey wasn't asking in a mean-spirited way. I think he was asking about the jargon, though the conversation turned to some claims about comics exceptionalism that Toni was more hesitant to endorse than Bob himself was.

And I should point out that the Festival's FAQ page does say that the academic presentations "will not necessarily be aimed at a general audience."

As it happens, a little bit of good-for-the-gander came around during the Krazy Kat panel. While I was giving my talk, Bob Harvey was doodling into his notebook.

(That's Jared Gardner below me.)

... and apparently I make an interesting subject for caricatures. 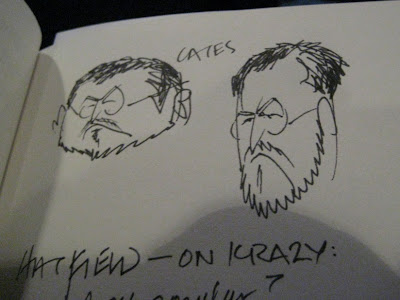 Later he told me he couldn't decide whether I have a round head or a long one.

Be advised: this is one of the dangers of presenting to a room full of comics scholars.

I'm hoping to have more to report before the weekend is over.
Posted by Isaac at 9:58 PM

Labels: doodles, reports from the field

Hope all is well. -Anna

Thanks for the kind words, your paper was eye-opening. Yet I won't feel I've truly been accepted into the world of comics scholarship until I find out somebody doodled my head during my talk.

Maybe if they hadn't turned down the lights during your talk, Michael — though frankly I was much too absorbed in the images you were projecting to do any doodling at all.

Charles Hatfield was drawing during your talk, but I don't think he drew you. Next time!