A Few Notes on Dylan Horrocks at Librarie Drawn & Quarterly

I was partway to the Canada border when I realized I had forgotten my camera, so the best image of Dylan Horrocks's appearance at the Librarie Drawn & Quarterly in Montreal this week is a crummy cameraphone picture. 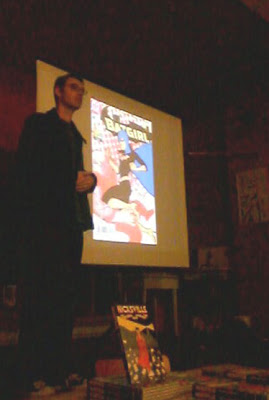 I'm a huge fan of Horrocks (both as a cartoonist and as a thinker about comics). I don't remember when I first read Hicksville, but it was probably back in 2001, when my student Jeff Seymour was writing a paper on it. I've taught it several times, and it's the only book from which I've bought a page of original art. When I found out that Horrocks was coming to North America, and reading just a couple of hours away, I couldn't miss it.

You can see the copies of the new edition of Hicksville in that image, and having read it I can say that the new introduction is a nice addition to the book. I'd say that if you are interested in comics at all, this book belongs on your shelf or your wish list.

Horrocks gave a really enjoyable and informative talk. I was surprised at how much time he spent talking about his days writing Batgirl for DC, but given that the problems of that job led to the opening of his current project, Sam Zabel and the Magic Pen, it makes sense for him to have dwelled on it. And in fact he made me curious to read his run on Batgirl, even while he was dismissing the comics as "terrible writing" for the most part.

The most exciting thing for me about the talk was his description of where The Magic Pen is going—that the book is going to try to discuss the value (and the perils) of daydreams and escapist genres. There's no one I'd rather see writing about that question than Horrocks.

The beginning of The Magic Pen is already online. Go take a look at it, if you haven't. It's good stuff: a smart story, and some of the sweetest cartooning that Horrocks has done yet. 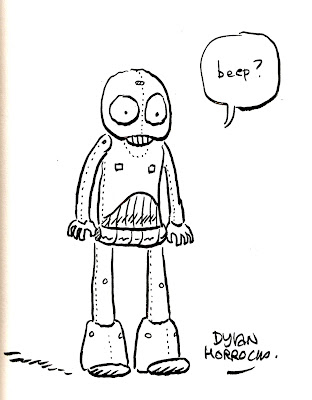 Ah, also, he was kind enough to draw me this cute robot.
Posted by Isaac at 1:37 PM

That robot looks alarmed! Wonder what it's looking at?

Probably someone mentioned Dick Burger in the Rarebit Fiend again.