I'm a little too fried from my long week of teaching, grading, and writing to offer any "new" insights tonight, but something interesting occurred to me yesterday when I was preparing for the graphic novel class.

It starts with a few very smart panels from Dylan Horrocks's Hicksville that I've been fascinated with ever since Jeff Seymour forced me to pay attention to them eight and a half years ago. 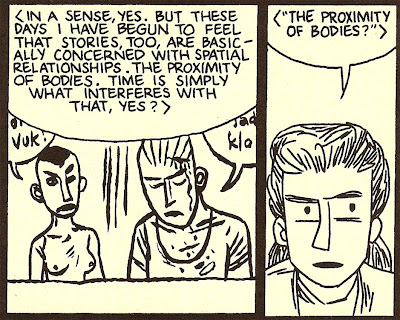 That's the great cartoonist Emil Kopen speaking in the first panel, explaining how comics can be thought of as maps. (Actually, Kopen asserts that maps and comics are the same thing.) Like maps, comics record or diagram things in space. Because each panel places characters in space, the comic is a record of spatial relationships over time. And aren't these changes in spatial relationships what stories are, to some extent, about? 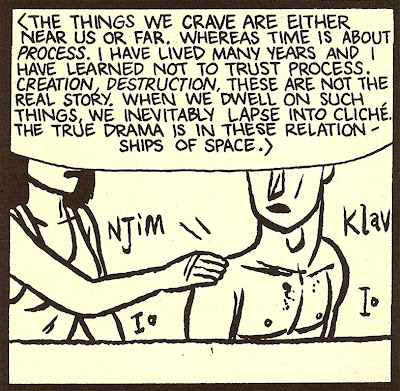 There's more to narrative and to memory than the movement of people (and objects) relative to each other—biting is not kissing, even if they're both oral intimacies—but Kopen's assertions exaggerate something genuinely true about the way comics represent characters in the worlds they construct.

And this came back to me when I was looking over the middle of Fun Home yesterday. 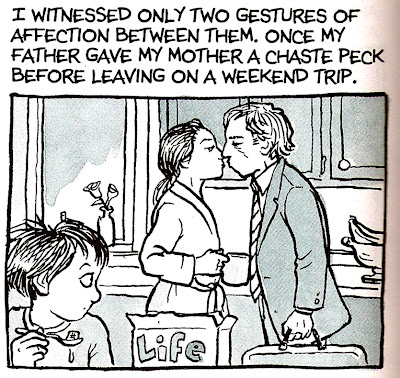 I've thought a lot already about the way that the dot-for-a-mouth cartoon faces in Fun Home reveal mainly the characters' inexpressiveness—their unwillingness or inability to express openly the sorts of emotions that would broaden the mouth or open it. But until this semester's passage through the book I hadn't thought about the waxing and waning of bodily proximity among these characters.

The panel above depicts a moment of unusual intimacy between Bruce and Helen, and yet there's still enough space between their bodies for a coffee cup. If you click the image to enlarge it, you'll see that their lips aren't even in contact for the "chaste peck" the narration describes.

In the panels below, we see even more extreme interpersonal distance, this time between Bruce and Alison, who begin and end the book in moments of what Bechdel describes as "rare physical contact." Here, they're distant, against the deep perspectival recess of a European airport terminal. 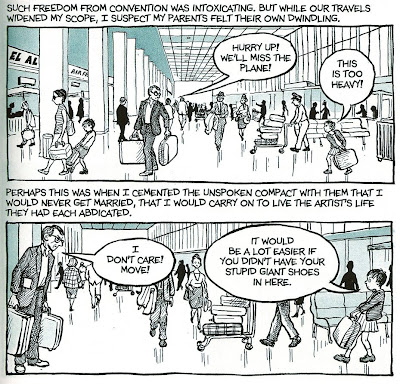 Even their speech balloons are keeping them distant from each other.

There's so little intimacy in the family that Alison's bedroom scenes once she's away at college are really surprising—maybe more because of the sudden intertwining of forms than because of the characters' nudity, which is mostly pretty modest. 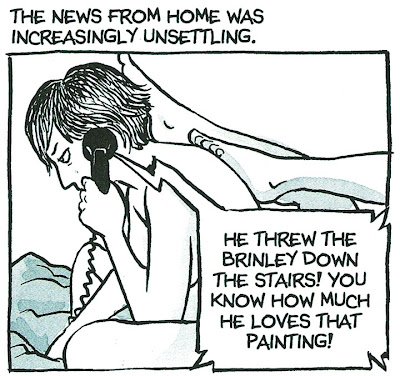 I really like the composition of this panel—the way that Joan's legs and feet fill the negative space of the curve of Alison's back as she slouches into her phone call. They're close enough that a single line defines the edge separating their bodies.

I think I first remembered Emil Kopen and his cartography, however, when I read the last page of Bechdel's chapter 3. It's the end of a scene in Bruce Bechdel's library: he's reading while Alison asks him to write a check so she can order some Mad magazine books. There's not a lot of action in the two panels on this page—they'd be easy to glance at briefly while the narration in the captions holds your attention. But they carry a lot of drama in the question of proximity or intimacy.

In the first panel, Alison and Bruce seem close, though they're both focused on their separate tasks. The lamp on the desk and the painting on the wall connect them and make them compositionally interconnected, as if they were touching or overlapping in the panel space. 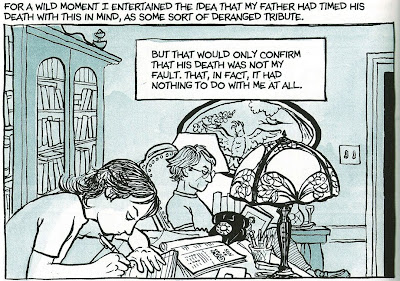 But then, in the chapter's final panel, our view swings around ninety degrees, and from the perspective of the windows we can see that the proximity in the first panel was only an illusion: father and daughter are distant enough from each other to be framed by separate windows, as if by separate panels in a comic. 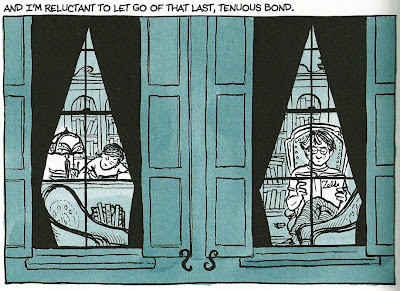 If I were going to make this a proper "one-panel critics" post, that might be the panel I'd pick.
Posted by Isaac at 10:28 PM

Every time I have taught this book, we have discussed these last two panels in the terms you describe here. So, yeah.