This week's Dungeon Alphabooks characters are both pretty minor in the grand scheme of Dungeon things.

Clementine the Ogress is, like Brock, a former wielder of the Sword of Destiny, briefly summoned by a quintet of vampire piglets while they're foolhardily taunting Herbert the Duck. She appears in just one panel. 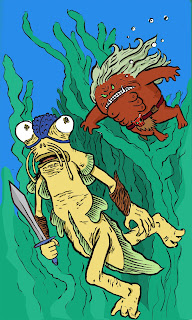 Caroy, the weird fish-man that she's chasing in my picture, is one of the underwater soldiers of Shiwomeez who feature in The Depths, the second album collected in the Heartbreaker volume of Dungeon: Monstres. This is a story that—and I cannot emphasize this strongly enough—IS NOT FOR KIDS. This volume is drawn (really quite beautifully, if you like weird sea creatures) by Patrice Killoffer. It features some really ugly sex off-panel, some really upsetting violence (when creatures bleed underwater, their blood and guts fill the environment), and some very creepy character designs, as well as some generally unsavory personalities.

Caroy is a creep himself, and he gets a fitting comeuppance, pierced from inside by coral that grows at an incredible rate. Probably the reason why I have Clementine chasing him down is that I still want to punish him for his part in keeping Dungeon from being innocent and fun enough to put into the hands of a kid (or, for that matter, a teenager—seriously, The Depths is some unpleasant stuff).

Yikes. Sounds like the world of Donjon is a lot more various than I thought, knowing only the fairly carefree shenanigans of the first English-language volume. Brr!

Nice drawing, by the way. This one seems really successful: those critters seem to fit your cartooning idiom very well.

But also: the ogress reminds me of one of Tom O'Donnell's contributions to Elm City Jams, namely the vertical-panel story from ECJ #3 (was that called "Look at my eyes"?).