Alphabooksbeasts: C is for Caliban

I've been wrestling with drawing this week's non-Donjon Alphabooks character for decades, on and off. Probably if I sit down to draw him again next year, I'll come up with something entirely different. That's in part because there's no single right way to draw Shakespeare's Caliban. 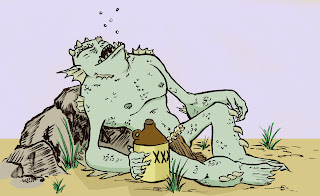 We know these things about him:

• He's half-human, having been sired on his witch mother Sycorax by the devil-god Setebos.
• He's ugly, and somehow deformed, based on the way Prospero and Miranda talk about him.
• He's capable of doing menial labor, but he doesn't like it.
• Stephano and Trinculo, when they find him hiding under a cloak, think he might be a dead fish or something. He has an "ancient and fishlike smell."

As I was thinking about designing him, I sort of vacillated between two dramatic demands the play has for Caliban. When he is cursing Prospero in soliloquy, I think Caliban has to seem genuinely malicious and a little frightening. But when he's been seduced by Stephano, Trinculo, and their bottle of liquor, he suddenly slides downhill from being the villain of the piece to being ridiculed by the ridiculous. (In this way, his character trajectory almost resembles Malvolio's. Think how fun it would be to see the same actor playing those two parts in repertory.)

You can see Caliban costumed all sorts of ways for different productions of The Tempest. In fact, he might be one of the most fun Google Image searches I've ever done. Some people really play up the half-devil heritage. Some play up the fishiness. There's an awesome-looking full-size puppet Caliban that seems to favor humor over menace. I've even seen someone trying to design a Caliban with Sendak's Wild Things as a base.

I wanted to discard any worries about actually putting a human being into the "costume," and just design the "real Caliban" that the stage actor would be trying to approximate. If I'd seen the really fun Arthur Rackham illustration before I started working on mine, I'm sure I'd have been influenced by it. 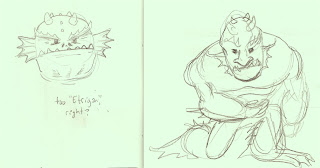 These doodles seemed a little too far in the direction of malice for me. I'd already done another version that I liked better: 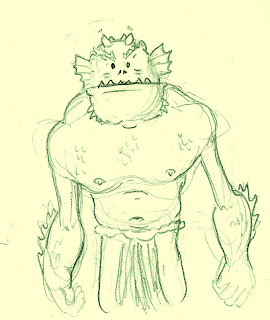 There's not must malice in that version of Caliban, but I like the way he looks anyway. I especially like the distortions of his anatomy. It's fun to picture those big shoulders toting a bundle of logs.

But then I started thinking about this "sympathetic Caliban" in the drinky scenes, and in Browning's "Caliban Upon Setebos," pondering the nature of his deity and the nature of the misfortunes inflicted upon him by Prospero's arrival. 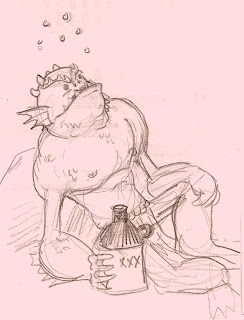 That doodle is obviously very close to what I wound up drawing. I just let him get a little more zonked out as he dug deeper into the bottle.

I mentioned at the top of the post that I've been drawing Caliban on and off for years. I was able to put my hands on a couple of classroom doodles from my first year of grad school, fifteen years ago if I'm doing my math correctly. I don't have anything to say about these; I'm just sharing them in the interest of completeness. 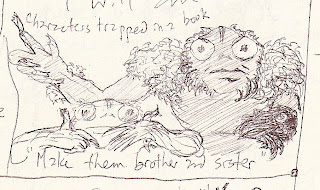 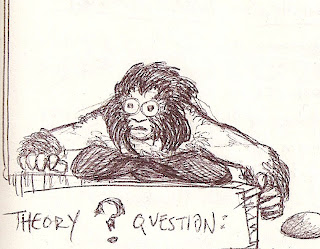 I was thinking about doing Caliban myself! I always envisioned him as furry, but your fishy fellow is quite convincing. Also, a drunken fishman is somehow funnier!

Strangely Popeye-esque, was my first thought...though now I'm thinking of V.T. Hamlin's Alley Oop (to explain the barrel chest along with the swollen forearms.

I like your finished drawing, even if I tend to envision a far more human Caliban as I read the play. (The remarks about the dead fish do require some thought, however.) I think I might prefer some of the process drawings, though, at least as designs for Caliban. The second process drawing (besides "too Etrigan?") works for me, with that honker of a nose. I don't find it too menacing; rather, I think the pose conveys very well the grudging subservience that Caliban owes to Prospero. I also really like the third process drawing, the head-on stance; almost Hellboyish, with really good proportions and a nice line on Caliban's right arm (our left).

Yeah, I tend to imagine a more human-like Caliban myself, to tell you the truth. Or, if he's not-human, I tend to read him in the direction of a malicious, often-injured ape or bear creature, with a snarl and matted patches of shag.

Like I said in the post, probably when I draw him again, it'll be way over in another direction. There's no single way to draw Caliban. He lives for a few hours, then changes his form, as do all theatrical characters. He just changes more than most.

What do you think of my comparison to Malvolio?

If I had ever actually acted as Caliban in a production of The Tempest, I think I would have volunteered to anoint myself with anchovies before each performance. There's no reason why the audience, too, could not have the pleasure of that fishlikeness.