Alphadonjon: E is for Elise and Eustace Ravin, Esq.

This week's Alphabooks entries are both going to be a little underwritten, because I'm just starting the first one at 4:20 AM. Both of my Dungeon characters this week come from the Early Years sequence in the series.

Have I already explained this? Donjon is being written into several different time periods at once. The "main" storyline, Zenith, features one character, the Keeper of the Dungeon, who is an old man; another set of books features the same character as a young man (well, a young bird). In the Twilight sequence, the characters of the Zenith storyline are old men. Then there's Parade, which happens between the first and second books of Zenith... Oh, it's complicated.

Anyway, in the Early Years there's a sinister taurine lawyer named Eustace Ravin, and there's a brave (but overconfident) young bird named Elise, who later becomes the Keeper's wife and is murdered by the Keeper's professional-assassin mistress. As far as I know, Eustace and Elise never meet, but here they are: 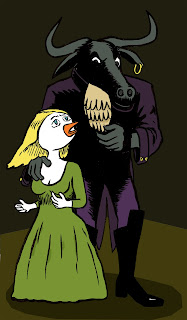 It took me a lot of work to figure out Eustace's head. Maybe I couldn't work out for myself whether he was a longhorn or a water buffalo or what; or maybe I just don't have enough practice drawing bovine snouts. But even with Christophe Blain's drawings in front of me on the page I struggled, on and off, all day. 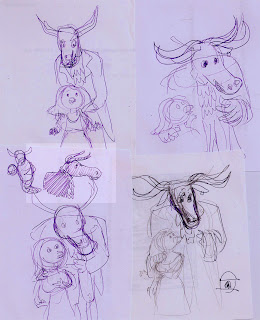 Next week: a serpent from the end of the world.
Posted by Isaac at 4:36 AM

I really dig the coloring here, Isaac. I thought the B&W version looked great, but I like this one even more.

Well, the way the books work out, I haven't really spoiled much... Just the ending of one of the Monstres stories, I guess, which really is sort of a surprise.

But in the "main" Early Years storyline, we skip from Elise's early flirtations with the Keeper (who is then just called Hyacinthe) several years ahead to her funeral. Even within individual segments the chronology is hard to understand!

Thanks for the compliment on the coloring. I think I'm getting better with it!

...and I am learning a lot about coloring from these French guys as I study their drawings!