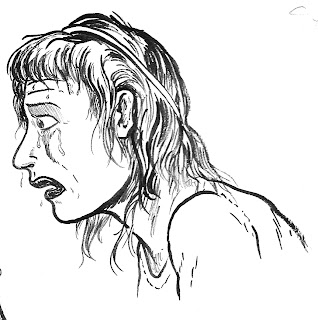 Here's my profile portrait of the lady Ettarde, a minor character in Le Morte Darthur who has some genuine shortcomings but whose ultimate fate is fairly disquieting, not only for its seeming excessive punishment but for the ugly light it sheds on some more prominent figures in Malory's Arthuriad.

Ettarde is a proud lady who spurns the advances of the worthy knight Sir Pelleas. Apparently her pride is unwarranted, since other ladies and gentlewomen "were fayrer than she"; but Pelleas esteems her highly, wants none other, and willingly suffers repeated humiliation and physical degradation at the hands of Ettarde's knights.

When Arthur's nephew Sir Gawain meets Pelleas, he sympathizes with his plight and offers to win Ettarde's hand for him by pretending to have defeated him. Pelleas agrees, but once Gawain lays eyes on Ettarde he pulls a John Alden and ends up wooing Ettarde himself—albeit in an underhanded way that effectively entraps Ettarde into granting him her sexual favors.

While Gawain enjoys a couple of days in a romantic tryst with Ettarde, Pelleas starts to wonder where he is and why he himself isn't united with Ettarde at last. Seeking them out, Pelleas comes across the lovers asleep in a compromising position, much as various versions of the Tristan story depict King Mark finding Tristan and Iseult together in the woods (a scenario transferred to Arthur finding Lancelot and Guenevere sleeping together in John Boorman's Excalibur). Pelleas considers killing them, but chooses instead to lay his naked sword across their throats as they sleep. He then takes to his bed, expecting to die of grief.

At this point, Gawain and Ettarde awake, discover the sword, and realize that Pelleas has found him—a bit of a shock to Ettarde, who had thought him slain by Gawain. Meanwhile, news of Pelleas's plight reaches the powerful lady Nynyve (a.ka. Nimue, a.k.a. Niniane, a.ka. Vivian), the chief Lady of the Lake. Nynyve not only takes pity on Pelleas, she also falls in love with him and deems Ettarde unjust to have shown him no mercy in denying his suit. So she casts an enchantment upon Ettarde that causes her to fall desperately in love with Pelleas—and her love is indeed desperate, since now that he thinks he knows her for what she is, he hates her.

Ettarde cannot understand her new feelings, declaring "Ah, Lord Jesu, how is it befallen unto me that I love now [him who] I have hated most of any man alive?" Nynyve's reply is curt and chilling: "That is the righteous judgment of God," she says. Thereupon Pelleas bids the "traitoress" never to come in his sight again, and "near out of her mind" with sorrow she goes away—where she does in fact die of sorrow, while Pelleas enjoys a long life of unnatural safety under the magical protection of his new lover Nynyve.

So: this little episode, just a few pages long, shows Gawain in rather an ugly light early in his knightly career—but I don't find Nynyve's behavior very becoming, either. Throughout, Ettarde is played upon by others more canny or powerful than herself. And while she may indeed be haughty in her refusal of Pelleas, and downright cruel in directing her knights to beat him and humiliate him, no less an authority than Lancelot will declare (over the corpse of the Fair Maid of Ascolat) that "love must only arise of the heart's self, and not by none constraint"—a view endorsed at once by King Arthur himself, who agrees that "That is truth, ... and with many knights love is free in himself and never will be bound; for where he is bound he looseth himself." Ettarde is artificially driven insane with love for a man she never cared for in the first place, is judged and found wanting for failing to grant his petition. Her own desires are overlooked or discounted by everyone else. And in sympathy with Ettarde, I have tried to draw her at the distraught moment where she realizes with horrified disbelief that she now loves unto death a man whom she despised when in her right mind and who now hates her utterly, utterly.
Posted by Mike at 4:19 AM