This week's Donjon entry for Alphabooks brings the last bearer of the Sword of Destiny that we'll see for a few letters, just in case you're tired of seeing that little red belt buckle. And in fact, after Ababakar's quick death, he's the only other wearer of the sword that we meet in while he's alive, other than Herbert the Duck, in the main timeline.

There's also a Red Guard assassin hanging out in the background this week. There's a snake under that cowl, I think, but we never see his face.

This week, D is for Delacour and Davraz. 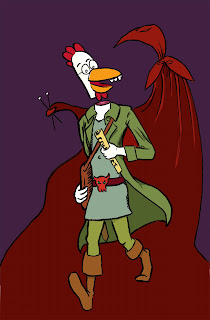 I'm cheating a little, I guess, with Delacour's name (and initial), though that's what he's called in the Zenith stories that feature him. Really his name is William Delacour, so maybe I should have alphabetized him under W. If we were working with the French originals, he'd go under G for Guillaume. Or maybe under C for de la Cour? Anyway, this is where he seems to belong for me.

And let me tell you, he's a scoundrel in the most aggravating way. Delacour is self-satisfied, ornery, litigious, niggling, petty, selfish, cowardly, malicious, and manipulative. He's the last chicken you'd trust with anything.

Also, he has a detachable head.

The reason his head's detachable is revealed in the first volume of Monstres: the Sword of Destiny has one blade that kills, and another that cuts without wounding. When Ababakar Octoflea confronts Delacour to kill him for the Sword, Delacour offers to give it to him, to save his own life, but the Sword refuses. The only way to claim the Sword from its owner is if the owner has been beheaded.

So Delacour uses the sword to cut off his own head with the blade that doesn't wound. Ababakar walks off with the Sword, and aside from a need for a nice tight scarf Delacour is none the worse for the event.

Ohhh, what a bastard he is.

Initially I wanted him to look blithe, carefree, smug, and jaunty, and I tried a few different doodles hoping to catch that (and also show his head detaching). 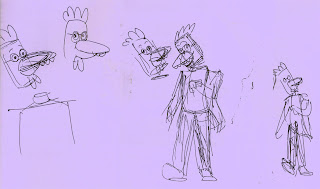 Do you recognize my source? 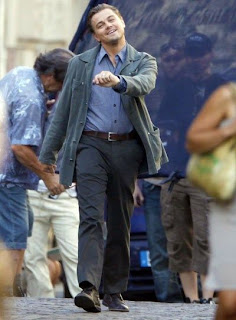 It didn't really come across, did it? Probably because Leo doesn't have a completely detachable head. 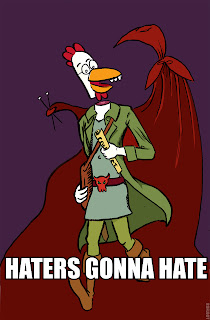 Next week: well, probably some more poultry.
Posted by Isaac at 3:15 AM

"Initially I wanted him to look blithe, carefree, smug, and jaunty": why "initially"? Didn't you finally succeed in drawing him that way? I think so, at least.

As usual, your Donjon doodle admirably apes the style of the original. Makes me want to read the series more fully!

No way is my Delacourt as jaunty as meme Leo.

But still, you inspired me to go make a little "macro," which I have added to the post.

"he's a scoundrel in the most aggravating way"

Seriously, every time he shows up in a story I just want him to go away! I feel like his character provides a good base for discussing how morality fits (or doesn't) into storytelling - but I'll let someone else deal with that (if someone hasn't already).

Colin! I didn't know you were a Dungeon reader!

I think for me Delacour's awfulness is less a matter of morality and more a matter of the sort of threat he represents. Reading Dungeon, I'm ready for magical and martial threats, but I don't think Herbert and Marvin are particularly well-prepared to deal with litigation. It's both a real danger for our heroes and an ugly intrusion of the real world into the realm of fantasy.

He's infuriating. For that, I sort of love him. He's the recurring villain I love to hate.

I wonder if there's a reason why his name (Delacour) sounds so much like Donjon's French publishers, Delcourt...

Yes, Delacour is supposed to represent the french editor of Dungeon, Guy Delcourt.
There is Mourad the pirate too, who is the boss of another french editor : Soleil.