Just so you won't think I'm 100% hater when it comes to silver-age science, let's have another look at a book our friend at Alternate Universe sold me for cheap. Here, my friends, is Shazam! #11, welcoming in the year 1974. 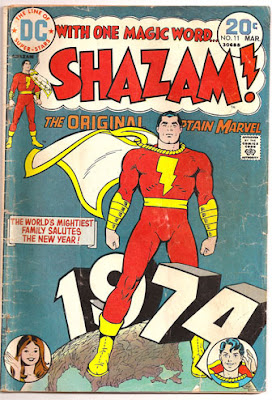 It's a three-story comic, opening with a queasy-making story about a flood of cherry Jell-O that threatens to overwhelm the city (not even Captain Marvel can eat it fast enough). Second is a fairly amusing tale about a mailman who dresses up as Cape-Man (a tubby Superman with a ski mask) in order to get respect. Both of those stories, really, deserve some attention, and maybe after I've worked my way through the rest of the Joe Stinson Collection I'll come back to them.

But this evening we are here to discuss the Sivanas and their hatred not only of the Big Red Cheese but that other jolly red-clad hero, Santa. This is the story of how Dr. Sivana, "The World's Maddest Scientist," with his children Sivana Junior and Georgia, tried to ruin Christmas. How can you not love these ugly mugs?

I love the hereditary overbite, the horrible nose, and the habitual scowl. The art in this story is by Kurt Schaffenberger, and I have to say it's really charmingly lively, silly, and fun. I wish more modern comics looked like this.

That giant clock Sivana is sitting at? It's a machine that controls the speed of time.

You might think that I'd object to that. "What? The Sivanas can control the speed of time, and all they want to do is to ruin Christmas? Why not use that sort of crazy-scientist chrono-knowhow to do something more practical?" But that's not the sort of story this is trying to be. It never asks you to take it seriously,* and it never asks you to believe that Sivana is motivated by anything other than a perverse desire to spoil other people's happiness. If he used the big clock to rob banks, I'd call stupid on that, but to me this is just fun. 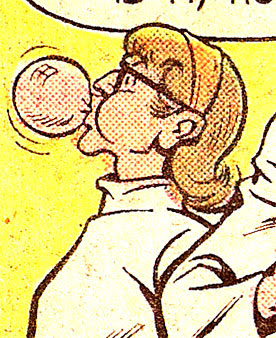 I mean, what reason is there for Georgia Sivana to be blowing bubblegum in the background of that panel? This is a story really written for kids. (There's even a point when the narrator in the captions tries to imply that despite any doubts you might be starting to have, Santa really might exist.)

Once time speeds up and the Marvel Family tries to solve the problem, they bump into Santa and he tells them that the Sivanas are behind it. (He knows when you've been bad or good, after all, so he knows what the Sivanas are up to.) The Marvels quickly burst into the Sivana lab and, with their combined strength, yank the clock hands back around so that time moves backwards and Christmas starts all over again at the normal pace. 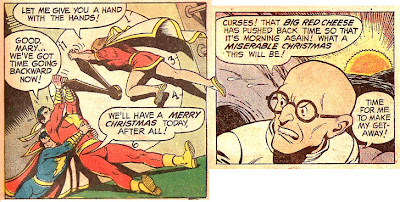 This is the kind of world we're in: a machine so complicated that it can change all of time is also so simple that physically forcing it to run backwards will make all of its mechanisms reverse their effects. Maybe that's a little naïve, even for this sort of comic, but if the problem couldn't be solved by brute force, Captain Marvel would be up a creek, right?

(Another thing that seems impossible to imagine in today's comics: notice the way that Mary Marvel, despite some really awkward positioning, is not set up in a cheesecake pose.)

Of course, Sivana doesn't get to make that escape he's hoping for... 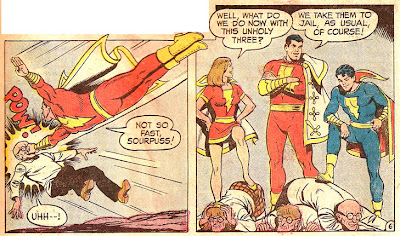 And although on the next page he's already threatening to break out of jail again, confident that 1974 is going to be his year, we don't hear any more from him for the time being. The Marvels give him a Christmas present, which seems to soften his heart a little bit ("Golly gee whiz!" he exclaims, "No one's ever given me a present before!"), and you wind up feeling a little bit sorry for him. Sivana really seems like a kid's fantasy of supernatural spite, when you think about it, and I think that's just the way he ought to be.

In my moment of sympathy for the devil, however, let me point out that this image really makes me flinch. 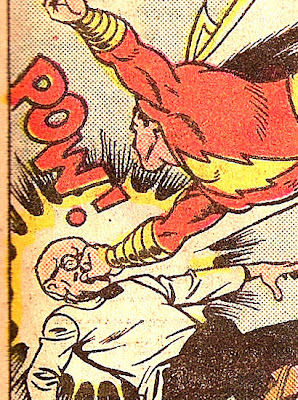 Talk about your unfair fights! It's the Superman-vs.-Luthor problem, made even worse because Sivana is a shriveled little old man. There's no way he's walking away from that blow. The poor little gnome. I hope he knows a good reconstructive surgeon.

*At least one of the readers didn't quite get the point. The first letter in this issue's "Shazamail!" begins, "Dear editor: Like fellow Kentuckian James McCoy, I find it hard to take the character of Captain Marvel totally seriously. But I still enjoy reading the stories..." This reminds me of the readers who wrote to the first publishers of Gulliver's Travels, complaining that some of the elements of the story seemed a bit implausible.
Posted by Isaac at 11:55 AM

Schaffenberger art! I love his stories in those Showcase Presents volumes of the Superman Family, because he hits a really sweet spot between semi-realistic adventure cartooning and humorous illustration. Plus, he draws Lois Lane really fetchingly, and the stories he illustrated with her tend to play to his strengths by making her more screwball-like and therefore more tolerable as Superman's gadfly.

Having mentioned his Lois, though, I feel compelled to demur somewhat on the idea that his Mary Marvel isn't posed cheesecake-fashion, though I'll grant you that he exercises restraint and even shows taste compared to a lot of today's comics artists.

And speaking of Mary Marvel...is she a brunette (cover) or a redhead (interior art, apparently)?

As for the scientific silliness: you're quite right, plausibility is largely a function of genre expectations here. And the difference between kid-friendly Shazam vs. wanna-be grown-up Flash shows that "superhero" in and of itself is at best a sketchy genre term...

Mary is definitely a brunette. I think her hair color got a little distorted as I tweaked the color and contrast on those interior pages.