I've been thinking about Sir Gawain and the Green Knight lately, not for any particular reason. (I mean, I'm not going to be writing about it or anything; it has just been coming up in conversation a lot around the house here.) 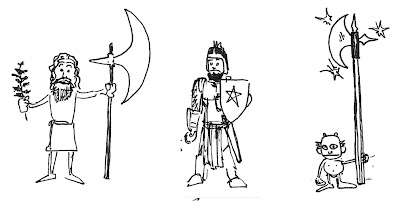 Yesterday, during one of these conversations, I had one of my unstoppable doodling sessions—which was the way I used to "take notes," back when I was taking classes, and which still happens when I listen to a scholar give a guest lecture or whatever. Some of the stuff I was drawing was just to test out how big a "gisarme" with a blade one "ell" (about forty-five inches) long would look.

And some of it was obviously just doodles. 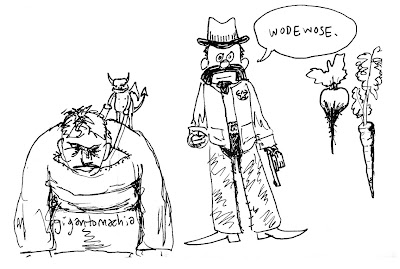 I'm pretty sure that Sir Bart the Sheriff doesn't appear in Sir Gawain, and I don't remember that little demon riding a giant, either. As for the root vegetables, I'm sure they're there, just not mentioned. Literature is full of these conspicuous absences and lacunae. (You know, sort of like the seduction scenes between Beowulf and Grendel's mom, only tasty and good for you. And not a horrible, stupid imposition on the story that utterly changes the meaning of the story.) 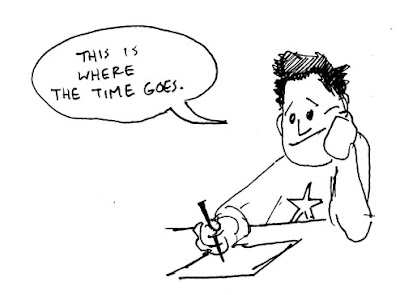 "I've been thinking about Sir Gawain and the Green Knight lately, not for any particular reason." Like you need a particular reason! It's almost always the right time to think about SGGK, sez I!

I think your Gawainy doodles are right cute, though the Green Knight himself looks friendlier than seems likely, at least at first. Sir Bart reminds me of the Muppets. And those great vegetables recall your first mini, which similarly featured a number of drawings of raw foodstuffs.

The Arthur of the Comics Project said...

Hi, Mike and Isaac. I just came across your blog today, and I was wondering if you have done any further work with Arthurian themes in you comics?

Thanks,
Michael Torregrossa
The Arthur of the Comics Project

Not so directly, no, though we did include a few goofy allusions to Arthurian tropes (and Jessie Weston!) in "The Knight of the Dopey Countenance," a sort of choose-your-own-adventure comic featuring a dimwitted knight. That comic first ran in Palimpsest, a grad-student literary magazine at Yale, then we reprinted it (I think?) in an issue of Satisfactory Comics (unless we didn't reprint it there? Isaac, help me out, bro...)

A couple of years ago, I wrote a post about Hungarian comics that included a couple of images from an Arthurian-themed comic by Sándor Gugi in the 1950s. If that's of interest to you (or if you haven't come across it yet), you can find it here:
http://satisfactorycomics.blogspot.com/2008/05/comics-in-hungary.html

PS You and I actually met briefly at Kalamazoo, years ago, but I have kept my medievalist and my comics pursuits fairly separate...

Maybe I should put the other one up on the blog some time.

Mike, why haven't we done more Arthuriana Comics? Seems like it should have been up our collective alley (the one that ran between Bishop and Humphrey Streets) all along.

Thanks for the update, Kaiser. I have a JPEG of the branching knightly comic, so I've printed it a few times for students in my Arthuriana seminars; maybe that's why I thought it had more of a published presence than it does?

And the reason why we haven't done more Arthuriana Comics *may* have something to do with a certain someone's struggles when it comes to drawing horses (though we nimbly avoided that problem in TKOTDC).

The Arthur of the Comics Project said...

Thanks for following up on my comment. I thought I had met one of you at Kalamazoo, but I was not 100% sure.

I'd be very much interested in seeing more of your Arthurian work and, if your interested, would hope that you could present some of it at the Popular Culture conference this year in San Antonio or next year in Boston, where I'm organizing sessions devoted to celebrating the upcoming 75th anniversary of Prince Valiant.

Thanks for the invitation, Michael. Other demands mean that I/we may not be able to submit anything, but I appreciate the work you've been doing on behalf of Arthur in the comics, study of villainous characters, and so on!

And in breaking news, Chris Sims of the Invincible Super-Blog and Comics Alliance has just reported on an education company's recent release of novel-themed posters in the style of comic-book covers, including King Arthur drawn as an homage to Jack Kirby. See it for yourself here:

(I agree with Mr. Sims that it's neat to see "Kirby krackle" coming from the sword in the stone!)

Michael, if you're still watching this comment section: I've posted our "Knight of the Dopey Countenance" (with slight alterations) up front on the blog.