The shuffle function on my iTunes program has kicked up "Christ for President" (lyrics by Woody Guthrie, music by Wilco). Well, that's an alternative to the other nominees, I suppose, though the Constitution isn't ready to allow a native Galilean in the White House (no Arnie, no Jesus!). But on this so-called Super Tuesday, when so many of my fellow Americans are participating in primaries and caucuses while I languish in the United Kingdom, I'd like to suggest another foreign third-party candidate: ¡Condorito! 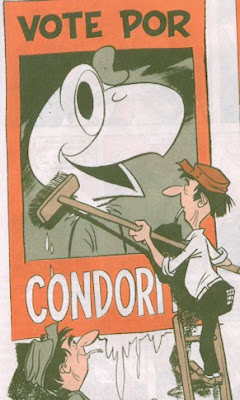 I discovered Condorito only a couple of months ago in San Juan, when, just before embarking on a cruise with my folks, I bought the magazine featuring the image above. Condorito Collección no. 6 was the only Spanish-language comic I could find, and I bought it with barely a glance at the contents: it was a comic, it was in Spanish, and it wasn't a pornographic historieta: how could it go wrong?

Okay, so I was a bit put off when the first strip in the comic climaxed with Condorito as one of only two survivors of a cruise ship disaster (!). Nevertheless, the plucky Chilean anthropomorph won the admiration of my whole family--even if his jokes were sometimes stale, occasionally sexist, and almost always punctuated the exact same way.

For you see, Condorito represents the apotheosis of the plop take (aka flop take). The vast majority of strips conclude with someone vaulting backwards out of the panel in response to some outrageous pun, idiotic behavior, or über-corny joke. Sometimes, it is true, the strips conclude with an incensed Condorito exclaiming "¡Exijo una explicación!" ("I demand an explanation!"), but most of the time it's heels over head. Behold a typical example:

Sometimes the plopper's reaction is so violent that he or she is launched completely out of the panel. The absent owner of the shoes in this panel is an airborne nun:

If the plopper is shoeless, such as a jungle cannibal might be, other items may remain as further tokens of the plopper's identity:

(It's just as well not to show the unflattering racialized portrayal of the cannibals, methinks.)

Though Condorito has more or less perfected the plop take with incessant practice, there are occasions when it doesn't seem quite right. Here Condorito himself does a plop take when his green wig fails to distract some passersby from his grotesquely swollen feet; maybe the feet are so heavy that they prevent the usual somersault?:

Finally, the first Condorito plop take I saw, on page 2 of that Condorito Collección, is one of the oddest of all: the aquatic plop take. How does that work? Thus, apparently: 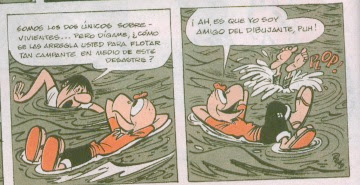 Man in water: We're the only survivors...But tell me, how have you managed to float so easily in the midst of this disaster?
Condorito: Ah, I'm a friend of the artist!

Of course, that begs the question: who is the artist? Condorito doesn't draw himself, after all--and if you've seen any of the modern versions of Condorito, they look pretty stiff and bloodless with their scrawny pen lines compared to the lively and calligraphic brushwork of Pepo. To learn more, click his name there. ¡Reflauta!
Posted by Mike at 2:31 PM

I have to say: I really love the maritime plop-take.

How strange to see a nun who wears high heels. I've never seen that before.

Based on the Blues Brothers, I would expect that nuns wear roller skates.

Nice to hear from you, Pepe!

I'm a chilean-australian and have been living here since I was only 6months old but everytime one of my relatives go to chile they always usually get me a condorito comic.

I love the character and want to buy issue #1. If anyone knows where to buy this particular issue. I don't mind if its not in the best condition, please respond to this.

I love condorito and I wish I still lived in chile to buy it every fortnight.