Here's another sample from the crummy old comics I got for my students. 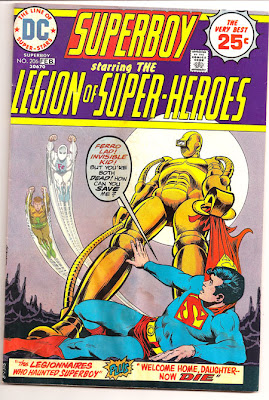 This copy of Superboy #206 is stained and warped, presumably from a water spill some time back in February 1975. The lead story, written by Cary Bates and stiffly drawn by Mike Grell, concerns (get ready for this) a pair of clones of dead members of a team of teen super-heroes who are sent a thousand years back in time (to the present) to test 30th-century cloning technology. They survive the test, but blow up when they return to the future, because clones blow up forty-eight hours after they are created.

I mentioned that the drawings in that story are stiff. The men in the story (and there aren't many women) all have zero body fat and a bad case of Spread-Eagle Syndrome: they tend to stand with their feet about four feet apart. I should scan a few of those images for you, just so you don't think I'm knocking Mike Grell for no reason.

But we are not here today to mock "The Legionnaires Who Haunted Superboy." Instead, I want to comment briefly on the thing that struck me most prominently in the back-up story, which features Princess Projectra (another member of that 30th-century teen super-hero team) and a series of unsettling illusions involving her family. The plot isn't important. I want to talk about the outfits. 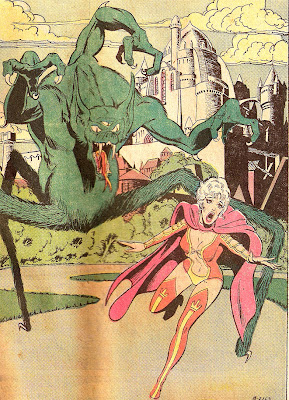 Actually, that monster is kind of cool, at least in concept: it seems to be based on a sort of trilateral symmetry, which is an interesting idea. What makes it especially creepy is the combination of that three-part body plan with elements (like its pecs, or its mouth) of our bilateral bodies. It's the sort of thing you might see in our demon book, now that I think of it.

But have a look at Princess Projectra's outfit. I'm pretty sure this is one of Dave Cockrum's designs. When he started drawing Legion of Super-Heroes costumes in the '70s, he redesigned pretty much all of the costumes, moving away from the standard jumpsuit (or skirted jumpsuit, for the ladies) toward designs that looked more super-heroic in that swashbuckling, bold Cockrum manner. For the men, this meant v-shaped costume elements moving from the shoulders to mid-torso, and for the women it meant cutouts from skintight costumes. Some of these designs are real successes. You can see a nice study in contrasts, drawn by none other than Jaime Hernandez, in a recent blog post by Evan Dorkin, where Jaime draws Phantom Girl in her Cockrum gear (sassy!) and then in her previous, 1960s costume (simple!).

Cockrum designed the original costumes for most of the new X-Men back in the '70s, too, and the eight-year-old Isaac who filled spiral notebooks with his own superheroes used a lot of pointy epaulets, tall boots, and (consummate) v-shaped torso patterns. That stuff got into my head almost as much as Kirby's design sense, and it still shows up in my superhero doodles from time to time. 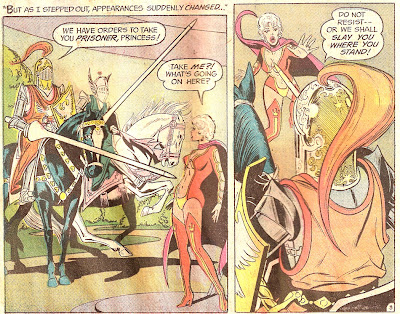 But this Princess Projectra stuff? This outfit is not one of the successes. Probably it at least looked lively when Cockrum drew it, but in Mike Grell's hands it looks awkward, improbable, and inappropriate for kids. It's hard to imagine a real person wearing such a get-up, outside of maybe some sort of go-go-themed '70s softcore movie. It does not look wholesome. Yes, it is cut out just as deeply in back as in front. Yes, the cape is actually just a really big choker necklace. 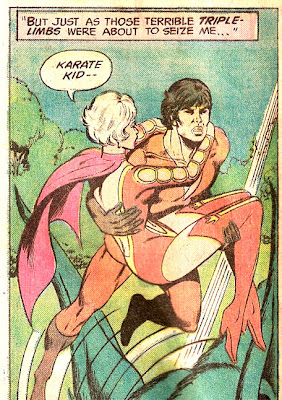 But what irks me is the sudden flash of yellow in her bikini area. Well, that and the elaborate arm cutouts. It's not a graceful design, except possibly when she's posed in a ramrod-straight posture that discourages the viewer from thinking about how the costume works. 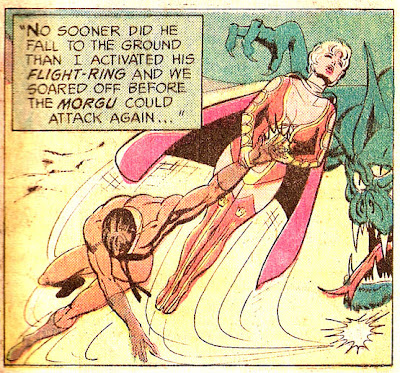 ...Of course, when you combine the Cockrum "boldness" with Grell's apparent trouble in getting a head to match up with a body, any character can start to look like a space-hooker. I've seen plenty of drawings of this Saturn Girl costume that looked fairly innocent, even though the design itself is pretty racy... 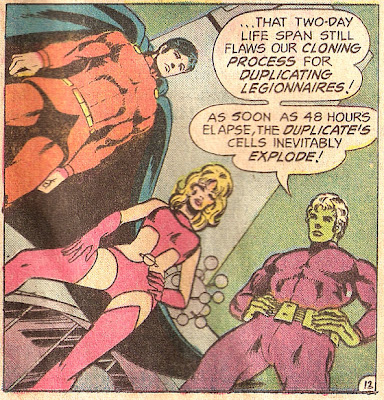 ...but Grell's version seriously looks like she's waiting to get paid.

And so, dear diary, I sign off, dedicating this post to Blockade Boy, who has a lot to say about super-hero couture... 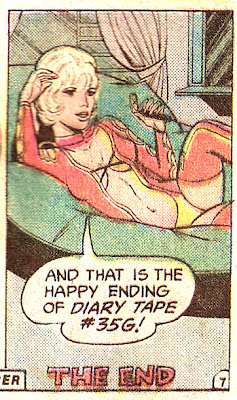 What does it mean, Isaac, that my first thought on seeing that monster was to post a remark about how odd its trilateral symmetry looked alongside the persistent bilateralism of the ears, nose, and teeth--only to see you make that very observation a sentence or two later?

I have to say: based on the comparisons you've shown here, I think I much prefer the modest costumes of the 60s Legion. Though you're right to suggest that a better artist (like Jaime Hernandez) might redeem these racier costumes to some extent.

Meanwhile, how funny to see that Mike Grell is the perpetrator of these images! I rode in an elevator with him back at the first big comics convention I ever attended, back in Atlanta in the 80s when he was getting a lot of attention for Jon Sable, Freelance and Green Arrow: The Longbow Hunters. I remember asking him if he encountered any derision or contempt when he met non-comics readers and told them what he did for a living (in retrospect, I'm wondering how on earth I phrased the question politely--I don't think I used the words "derision" or "contempt"!). He said he identified himself simply as "a cartoonist," and that usually got him off the hook--with some respect, even (see Kliban's drawing on the esteem accorded to cartoonists).

Aw, now, you have to dig that Cockrum costume for Phantom Girl. It's groovy.

A dedication? To me? Thanks, man! *wipes away tears in a brusque, macho fashion*

I must be the only guy in the universe who isn't fond of the Disco Pantsuit Phantom Girl. But I'm right with you when it comes to Princess Projectra. That costume of hers was just too skanky. On the other hand, I can tell you from personal experience that My Own Private Paris Hilton really is a hateful, stuck-up skank, so maybe she deserves it! *considers this for a minute, while puffing on pipe* ...Nah! Nobody deserves that.

To follow up on Jeckie's costume, some time later, another artist (Jimmy Janes I think) filled in the front torso, adding a simple rounded collar at the top. It was colored to match the red of the rest of the costume.

Subsequent artists, fill-ins and such, weren't aware of this and drew the original design. What was amusing is that the colorist still painted the torso red! So there must have a been a memo or something. I wish I knew the behind-the-scenes on that one.

Thanks for the follow-up information, atsmith7! I imagine that this would be a costume likely to inspire coloring errors and "editorial swimwear."