So, okay: last week I was complaining about some of Mike Grell's figure work in an issue of Superboy from 1975. Wikipedia tells me that Grell was in his late twenties when he pencilled this issue, but it still shows some of the quirks of an incompletely developed style.

First, as I mentioned, the men in their spandex have zero body fat, and their outfits look uncomforatbly clingy. I know that hyperfitness is a common trope in superhero comics, but I also know that drawing a figure as pure musculature is easier than putting realistic cloth garments on the same figure. I've often suspected that Superman's skin-tight suit was originally as much an effort to assist Joe Shuster's then-underdeveloped drawing ability as an effort to evoke circus strongmen. But I digress. My point is that Grell's figures are all lanky, taut, and anatomical to the point of awkwardness. Show the readers what I'm talking about, Superboy.

But the thing I want to show you, really, is the weird way that Grell has these guys stand with their feet a yard or more apart when they're trying to look impressive (or surprised). It's all over this story, and it's a pretty weird tic. Here's the opening splash panel, in which Superboy (in his pajamas) is menaced by two ghosts of dead Legionnaires. (This scene does not appear in the plot of the story.) 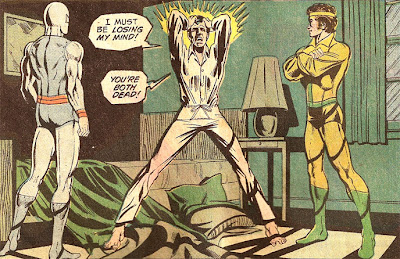 I hope he hasn't pulled a muscle, jumping out of bed into that pose! (This raises an issue: is Superman strong enough to tear his own ligaments or to strain his own muscles? Surely there's a webforum where people discuss this sort of thing.)

Later in the comic, a mysterious interloper destroys a building (by slamming into it at high speed), then rises from the rubble: 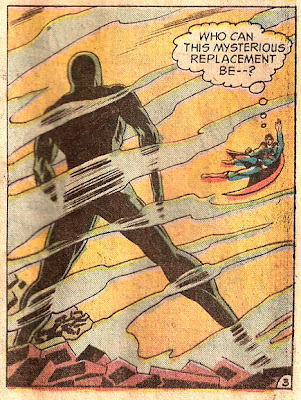 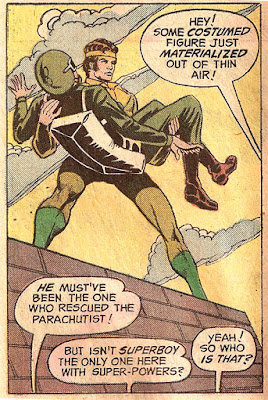 ,,, And the crowd below is simply agog: 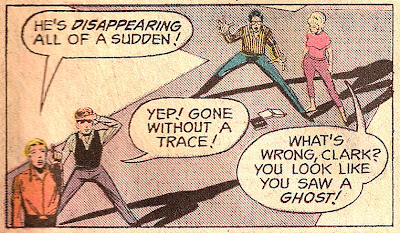 Hey, that one guy is Clark Kent! And he's managed to assume a pose even more exaggerated than the one in the introductory splash! (To me, this actually looks sort of like "What if Steve Ditko drew The King Canute Crowd?" Because I'm sure that young Clark Kent has been replaced in this panel with the young Alec MacGarry.) 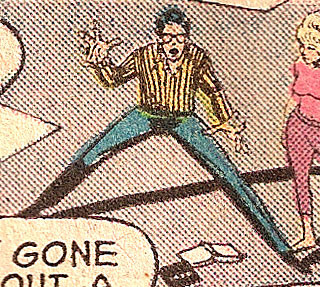 Wow, that's gotta hurt. He "look[s] like [he] saw a ghost," indeed! Apparently, that's the way someone stands when he sees a 30th-century ghost: 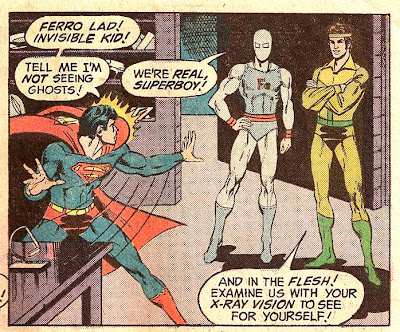 (Although, you know, it occurs to me: Superboy has seen these guys die, in the 30th century, but he also knows they're time travelers. Why doesn't he just assume that they've traveled back to his time from a time before they died? Instead, he's all, "But -- you're dead!" ... Couldn't that cause some kind of time-paradox? Ah, Cary Bates: you've done it again.)

Fortunately, Superboy assumes a different stance in the story's final panel, after he and the genetic mockeries of actual life destroy a robot that Superboy built just to test their willingness to die all over again. In this last panel, he casually reveals that he already knew that the interloping Legionnaires were merely auto-destructing 48-hour-lifespan clones. 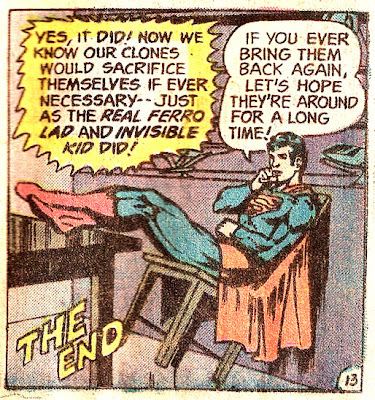 Chillin' in a secret room in his parents' basement, talking on the "Time-Telephone," without a care in the world, and still looking like he has every single muscle in his body tensed to the point of explosion: that's how a Super-Teenager ends a night of self-imposed robot-fighting.
Posted by Isaac at 9:39 PM

I don't remember such extreme stances in Grell's 80s comics, so he got better, I reckon!

(Mind you, the title of this post might inadvertently recall the case of Senator Larry "Wide Stance" Craig...but I digress...)

While I won't argue with you that Grell's art is underdeveloped at this point, I will dispute your contention that "Superman's skin-tight suit was originally as much an effort to assist Joe Shuster's then-underdeveloped drawing ability as an effort to evoke circus strongmen."

In the first place, Shuster's Superman never shows the Grellian extremes of clingy spandex costumes adhering to seriously cut musculature. His Superman is full of open forms and gentle curves, not the visible ribs, abdominal muscles, and leg sinews of Grell's Superboy.

In the second place, Shuster's comics are filled with people wearing perfectly ordinary clothes that are even baggy at times: you don't see his Superman cavorting with spray-painted costumed characters of the likes of Ferro Lad and Invisible Kid.

It's true enough that Shuster cuts corners in his drawing, mostly in the backgrounds, but already in Action Comics #1 he's drawing solid human figures with comfort and even grace at times, touched at its best with a cartooniness reminiscent of Roy Crane.

As for your question whether Superman is strong enough to tear his own ligaments or strain his own muscles: first, this is the sort of question that keeps junior theologians up at night ("Can God make a rock so heavy He [sic] couldn't lift it?"). Second, as I'm sure you'll recall, Chris Sims of the-isb.com recently described a Walter Simonson-penned issue of Thor in which the mighty Asgardian strikes an opponent with a blow so mighty that it shatters all of his own bones! I'm not sure there's much more to discuss about that, but there you go.

Okay, I take back what I said about Joe Shuster. I haven't looked at those early stories from Action; I'm just basing my notion on the fact that, for most "realistic" cartoonists, the anatomical structure gets worked out before the clothes are drawn, so ending with a skinless body (like Grell does here) saves a step.

It's interesting to imagine what superhero comics would have looked like, though, if Shuster and Bob Kane hadn't drawn their main characters in tights back in the late '30s. Would Wolverine and Booster Gold be wearing suits and ties today?

Would they look like the Spirit or Mandrake the Magician, you mean? Or Wesley Dodds as the Sandman? Or Rorschach?

I mean, maybe, but maybe not! It makes a certain sense for very athletic characters to wear close-fitting outfits, as, you know, athletes and acrobats do, partly for practical reasons, partly for the aesthetics of their respective professions. Why shouldn't superheroes have a kind of sartorial solidarity, a uniformity of uniforms, as a badge of their guild?

These poses remind me of a Tulsa landmark, the golden driller: