Has it really been six months since the last Swipe File post? Indeed it has. Our Elfworld story is the monster that ate the blog! Alternatively, it's the hero that rescued us from nostalgic navel-gazing, but here I go again with the magnifying glass on the details of comics past...

In issue 4 of Satisfactory Comics, two of our swipes featured birds. One was our swipe of museum art, Brancusi's beautiful Bird in Space, which can be seen at the Guggenheim in Manhattan or right here in an image from the Gugg's website.

We owed this museum swipe to our friend and contributor Steve Newman, who submitted "Brancusi's Bird in Space" in response to our appeal for "a noun or noun phrase" that would be "featured prominently in a fable or adventure story." That's how we ended up making a character out of the sculpture--the Golden Bird of Mystery:

I think this remains our only swipe from a sculpture thus far.

The other bird featured in issue 4 is the beloved Owl (aka Wol) from A. A. Milne's Winnie-the Pooh, as illustrated by E. H. Shepard. He's only one of six owls included in this scene featuring the Parliament of Owls, but apparently the Parliament meets at his own house: 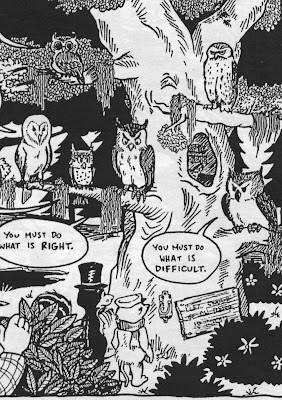 That's Owl at the top right, of course.

When I'm busy in my office but not so busy that I can't receive visitors, I put a sign on my door that says "Please knock if an answer is required," in homage to Owl. And here's an inadvertent homage to Shepard: the person who sold me the scanner I used to prepare this post owns an original Shepard pencil drawing of Pooh-related art. Too bad he wasn't selling that for cheap!
Posted by Mike at 6:21 PM

...You might also mention that Owl's sign (or one of them, anyway) is present in that image, it's just very hard to read. (It's a little easier if you click on the image, and if you know to look for "PLEZ CNOKE IF AN RNSR IS REQID."

The interior of that tree is also modeled on an image of Owl's house, if I recall correctly.

... Ah, for the halcyon days when one had time to ink that kind of foliage...

You recall correctly, sir! And you spare me having to mention Owl's sign myself (though it's implied in my office door homage, as well).

And those days were halcyon indeed -- even if that would imply a Parliament of Kingfishers rather than Owls...