My other belated "K" entry for Alphabooks takes us away to the desert Southwest, to the precinct of Kokonino, in the same neck of the woods as Monument Valley and the Elephant's Legs (or Feet).

Once I got it into my head to draw a character from Krazy Kat for the letter K, I couldn't limit myself to just one. For the record, the busybody duck, Mrs. Katalpa Kwakk-Wakk, was the first to occur to me, but she's not the only Kokonino denizen to sport those initials. There's also the brickmaker Kolin Kelly, and of course Krazy him/herself, and his/her erstwhile love interest, the sensational character find of 1930, Kiskidee Kuku. (He's a poodle.) 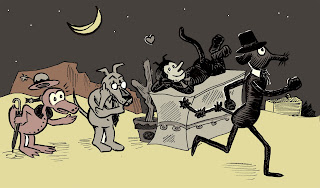 Kiskidee Kuku's appearance in Kokonino unsettles the natural order of things. Offissa Pupp and Ignatz Mouse are on the outs with Krazy, no bricks get tossed, the jail remains untenanted, and eventually pretty much everyone just up and leaves town. Over the span of several Sundays, things go wobbly, then (of course) everything settles back down again.

Anyway, there's a picture of the problem jauntily trotting into Kokonino.

I tried to keep the colors in my drawing close to a duotone print, because I don't really think of Krazy as happening in color, despite the splendor of Southwestern geology and the fact that the Sunday Krazys were in color for years.

I "get" Herriman's doodles about as well as I get Trondheim's character designs (I can fake Herriman's backgrounds all right, and I can do a passable Ignatz from memory), though I wasn't sure about replicating them with a brush instead of a nib. And let's face it: drawing Krazy Kat is like forging someone's signature. Herriman drew all of these characters as doodles, really, and if you draw the same doodle several times a day for decades, it's going to pick up some personal idiosyncrasy.

I hope I have at least rendered Krazy &c recognizably. Please let me know what you think. 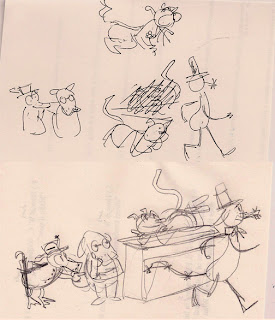 Now, if you are a purist and don't consider Krazy and her compeers to be "characters from a book," I have two things to say to you:

First, although they were designed for a more ephemeral medium, I know them from books. It's true that I saw Krazy in the local free weekly, or maybe the Daily Texan, while I was an undergrad, but I knew her/him first from the collection edited my Patrick McDonnell and others and from the weird novel by Jay Cantor. And my love for Krazy has only been extenuated and enriched by the Fantagraphics collections.

Second, I have a post that will "count" anyway. So there.

Next week: a couple of Pet Avengers.
Posted by Isaac at 10:45 PM

Awesome job! Before I even read the title or post, my brain went, "That looks like Herriman! Yay!"

What do you think tipped you off? Was it the canoe-shaped moon?

Krazy Kat Kharacters, brilliant!!! I love that comic beyond reason, & it saddens me that most people I know have never heard of it. Like Lupi I saw the Herriman in your drawing instantly, & it gave me a big ol' krazy grin.

That novel by Jay Cantor is a weird one, all right.

More to the point:

2) I think I agree that Krazy Kat in the funnies looks better in black and white than in color (though actually that's not quite what you're saying, is it?). However, I really love the watercolors that Herriman laid on top of some of his original pages, as seen in (for instance) that Patrick O'Donnell et al. book that you mention. The color is usually fairly muted (though there are some bright oranges for the mesas on occasion), always tasteful.

3) Since it is my prerogative (and my curse) to kwibble, I will note that, frequently over the course of Krazy Kat, Coconino County (sic) was a notable exception to Herriman's propensity to respell standard C's as K's.

4) I think the brush turned out really well for the characters, actually! I'm a little surprised that you didn't bust out the ol' nib pen for this one--once upon a time, at least, you were getting a fair bit done with a crowquill (krowkwill?)--but given the good results, I say huzzah for the brush. Oddly enough the backgrounds, in pen, look a lot less Herrimanesque as a result of the thinness of their line--not scratchy enough! And speaking of the backgrounds...

5) ...I think what might be the least effective aping of Herriman here is precisely the backgrounds, because, for all the seemingly tossed-off doodliness of his ink line, Herriman often was quite careful about perspective or at least giving the impression of accurate perspective. The plinth or whatever it is that Krazy is resting on looks wonky to me, as does the boxy shack in the background. But really, I didn't pay attention to them the first half a dozen times I looked at this image. The characters are the heart of the drawing and they came out great: the modeling, the poses, the way their reactions to each other convey drama and personality...All very nice to see!