Alphabooksbeasts: L is for Lockjaw and Lockheed

This week's non-Donjon Alphabooks entry comes from some of my favorite books when I was a kid and a teenager. That is, if you're willing to count them as books.*

I think it will surprise no one to learn that I read a few Marvel Comics between the ages of four or five and fifteen or twenty. I was pretty into The X-Men during the Byrne-Smith-Romita years, but nowadays I'd toss those books on the pyre in favor of some old-school Stan-and-Jack Fantastic Four. That's the real stuff.

So let's say L is for Lockjaw and Lockheed. 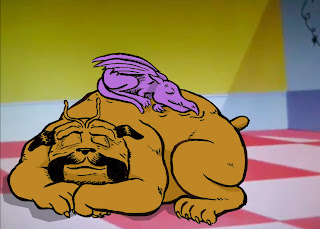 Can you tell from my inking which of these characters I'm more fond of?

This is another drawing that didn't get much time to develop (owing to the fact that I only finished "K" yesterday and had three ideas for entries today). In fact, I used my preliminary doodle as pencils, taping it into my notebook and tracing with a brush through the flimsy Moleskine paper. Here's the doodle: 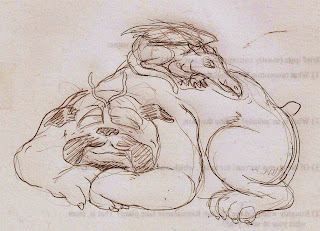 Do you recognize the pose, or the background I swiped for the finished drawing? Identify the source (of both; it's the same source) in the comments section below, and I will happily send you a couple of alphabet minicomics or some other suitable back-issue prize.

Next week: things get deep (and briny).

*I know I'm stretching the definition of "books" for the second week in a row. All I can say is (a.) comics, even superhero comics, are fair game, (b.) these guys are definitely in some "books" now if they weren't then, and (c.) if you're anxious about it I have another post for you.
Posted by Isaac at 4:09 AM

Oh,I totally recognize that pose, checkered floor, yellow walls, etc. I'll wait and see if anyone else IDs it, though...

...Yeah, I doubt that I could send you any back-issue prizes that you don't already have!

Cute drawing! Surely Lockjaw is your favorite of the two, no?

I do NOT recognize the background or the pose. For a while I thought it was a Chuck Jones classic ("FTK" FTW!), but apparently not. So, Ben, what is it?