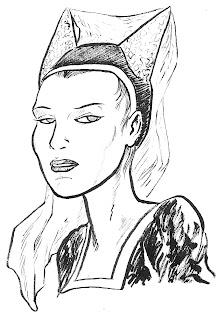 My belated contribution to the Arthurian alphabet for M is the lady Morgawse, who, in Sir Thomas Malory's Le Morte Darthur, is the wife and later widow of King Lot of Orkney; half-sister and lover to a young King Arthur; ill-fated paramour of Sir Lamorak; mother, by Lot, of Sir Gawain and his brothers Aggravain, Gaherys, and Gareth; and mother, by Arthur, of Mordred.

If the names Lot, Lamorak, and Mordred mean anything to you, you appreciate the trouble that this woman finds herself in (and participates in or contributes to herself, whether wittingly or otherwise). She's pretty enigmatic because she remains only faintly drawn by Malory: the occasion of great desire in others—at one point Lamorak is overheard lamenting aloud about the emotional anguish his love for Morgawse causes him—she never gives voice to her own desires. But given her sexual history—which includes a long liaison with the son of a man whom her late husband's sons believe to have slain their father during Lot's war against her half-brother Arthur—I think it's fair to assume that she had rather strong feelings and desires of her own.

She also pays for her desire in one of the most shocking and brutal scenes in all of Malory (and that's saying something). Malory's narration of that scene includes wickedly painful details delivered in a laconic style that makes their hurt seem worse than a more empurpled prose would have done, and there's some astonishing dialogue, too.

***
For this drawing, I took a new tack to the preparatory phase, doodling quick rough sketches on a magnetic doodle pad that belongs to my daughter. You know, like the one Isaac used here. A pretty efficient medium for trying out visual ideas, actually!
Posted by Mike at 10:45 PM