Alphadonjon: M is for Marvin and Marvin the Red

For this week's Donjon Alphabooks entry, I am blessed with a double-barrel dose of warrior-sidekick awesomeness. M has got to be for Marvin and Marvin. 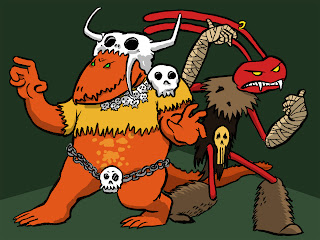 Although they are currently unarmed, they're ready for trouble. Or perhaps for a truly awesome rap battle (probably facing off against the Ill Lithids).

Marvin (the Dragon) is really one of the main characters in the whole course of Dungeon. He's Herbert's mentor and best friend in the Zenith stories, and under the alias of the Dust King, he is one of the heroes of the the Twilight volumes. He has a terrific blend of honor and pragmatism, of mischief and solidity, of wisdom and insecurity. He might really be the most interesting character in the whole series, not least because of the terrible sacrifices he makes between Zenith and Twilight.

Plus, he has a very metal wardrobe, doesn't he? For pants he wears a skull on chains as a codpiece. (Actually, he has several different outfits; this is the one from the very first volume, Duck Heart.)

Marvin the Red (a sort of demon rabbit) is, more or less, the Dust King's troublemaker sidekick in the Twilight volumes of Dungeon. He's a dangerous warrior in his own right, but he's impetuous, overconfident, and selfish. So in fact, like Hyacinthe and Herbert, these two wind up knowing each other well, but not when they're the ages they have in this image.

Well, if you're interested, here are my notes. It took me some work to figure out some good "fight-ready" poses, and I think these notes are hampered by the size of the scratch paper I was using. 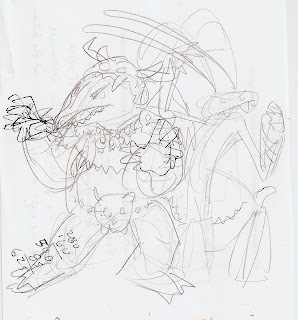 And hey, we're halfway through the alphabet!

Next week: oh, just your average zombie wizard.
Posted by Isaac at 1:35 AM

Those character designs are so good to begin with they're almost foolproof: it would be hard to draw them badly! Having said that, I congratulate you for going beyond not drawing them badly so as to draw them well. They look great, they really take to color well, and, darn it, I'm going to have to read all these things at some point, aren't I?!

Keep up the good work!

I submit that you may well read Donjon before I read Lone Wolf and Cub, even though I own every issue of the latter. Do you own any Donjon yet?