I'm sorry this week's Alphabooks submissions are coming so late. I was traveling last week, and while I was traveling I was reminded of an essay deadline that had passed back on June 1. Immediately on returning home I had to pretend to be a scholar, instead of pretending to be a cartoonist.

Anyway, better late than never, right? The Donjon entry for K is Kadmion. 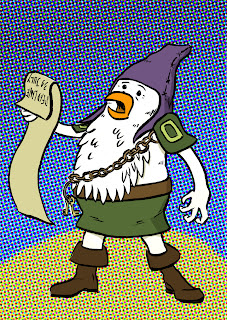 There's not a lot to know about Kadmion, apart from the fact that he's the Dungeon's head administrator. (He's in charge of things like making sure the monsters get paid or fed.) He has been an associate of Hyacinthe's since the latter's days running an underworld syndicate (before the Dungeon itself was conceived), and he seems to be stalwart and sturdy.

He's also a lot of fun to draw, as a character design. Some of the Dungeon characters seem to make sense to me right away, and it was easy to start filling my margins with Kadmion doodles.

I even drew him a bit during my recent travels. (Here, I am drawing him in Chicago, at the beginning of a layover.) 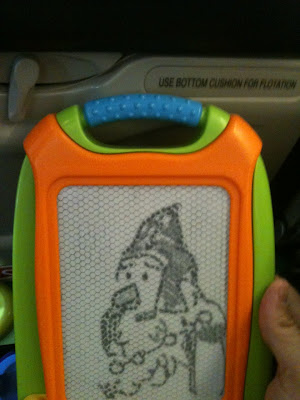 And yet, as much as I enjoy drawing Kadmion, I had trouble deciding what to make him do. I guess dungeon administration doesn't lend itself to interesting poses the way that monstering or Olf-monarching does. 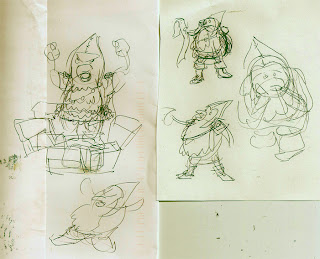 I figured I could have him a little shocked by something unseen on a scroll. Then I realized that I should make the scroll reveal how late he was for his own deadline.

On Monday: a really great monster who somehow vanishes before the Dungeon is a Dungeon.
Posted by Isaac at 12:57 AM

One reason why these Donjon drawings may work so well for you, Isaac, is how close some of them are to your own design principles. At least Kadmion here recalls (for me) some of your character designs for SatCom #8 (the Egg, in particular, though this guy also has obvious elements that would suit the name of the character we nicknamed the Chicken). And the costume even recalls bits of your late, lamented Mapjam and Matteu designs. That's what I think, anyways.

Another way to think about that point, of course, is that Trondheim's designs in Dungeon were already affecting my sense of character design lo those many years ago. In fact, it's probably influence and not coincidence that you're noticing.