AlphaBots: B is for Bishop

Well, I have managed a second week of Alphabots without too much strain.

If you've seen Aliens, then I'm hoping the image in this panel will be familiar: 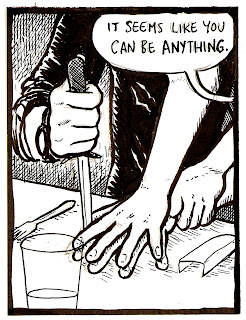 That's right, B is for the android Bishop, he of the speedy knife trick.

I had originally thought about drawing Lance Henriksen's Halloweeny face. I'm sure he'd be a lot of fun to draw, even for someone with my meager skills of caricature. But since I'm putting this card into my "stochastifactory" deck, and since characters once introduced there have a tendency to reappear, I thought a slightly more ambiguous close-up would be a better idea.

Also, to tell the truth, I figured other cartoonists were bound to do better caricatures of Lance Henriksen than I could.

As for the text in the panel: well, when I rolled a die, the table told me to use a line from a song that was stuck in my head.


So far, every time the die has told me to use song lyrics, they've come from an episode of the Super Music Friends Show.
Posted by Isaac at 4:41 PM