AlphaBots: C is for the Cooker

You may know this week's Alphabots robot without knowing its name. If you've ever seen the original Wallace and Gromit short, A Grand Day Out, you will probably remember the clunky coin-operated robot they encounter when they arrive for their cheese holiday on the moon. In you have never seen A Grand Day Out, and you have Netflix, you're in for a treat.

Anyway, I only learned this year that the robot in A Grand Day Out is called the Cooker. 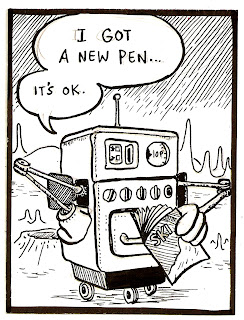 I'm really pleased with the way this guy turned out.

As usual, because I'm using this as a card in my "Draw Two Panels" process, the dialogue is coming from a source determined by random die roll. In this case, it's from a tweet by Katie Skelly.
Posted by Isaac at 10:31 PM