AlphaBots: D is for Data

This week's AlphaBot is a shoo-in. I was seriously into Star Trek: the Next Generation when it was originally on, and I've spent a lot of time reading about the show, thinking about it, and re-watching it.

On my most recent trip through the series, I'll admit that my interest was much more with Picard (and, to my surprise, Riker) than with Data and Geordi, and some of the elements of the show have started to feel "dated" to me, not only for the effects and designs, but for relationship patterns that seemed to make more sense to me when I was around twenty, instead of around forty.

Anyway, even though it's not a kind of dorkiness that I have ever reveled in, I retain a soft spot in my heart for the Enterprise's resident Soong-type android. Thus, D is for Data. 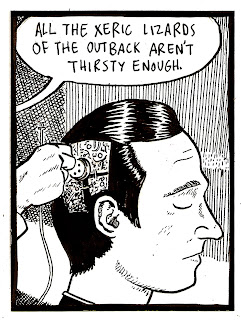 Considering my meager skills of caricature, I think that's a pretty good likeness.

The randomly-derived dialogue on this card is a statement comes from my dictionary app's word of the day, xeric, and some coincident conversation about Australian lizards. It's sort of sad that xeric is now mainly going to mean adapted to dry conditions. There were better days.