AlphaBots: A is for Astro Boy

I've been trying to decide whether I have time to do AlphaBots. After all, I had to bail from AlphaBooks after the letter Q, and I don't have a whole lot more time this semester, even though I have committed myself (apparently) to a weird new drawing project.

And then I thought, well, what if I combined the two projects? I'm supposed to have a deck full of random drawings; what if twenty-six of those random drawings, over the next twenty-six weeks, included an alphabet of robots, all drawn from different sources? 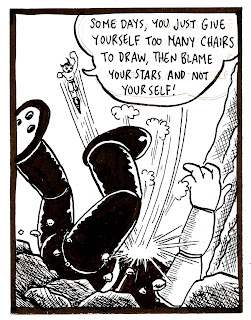 (The text in my Alphabots panels is still going to come from a lot of random places; this particular one is a version of a recent tweet by Matt Wiegle, edited for brevity.)

Don't see Astro Boy in that panel? (It's swiped from Tezuka's 1967 story "The Faceless Robot," which appears in the eighth volume of the Dark Horse Astro Boy reprints.) Oh, he's just little. 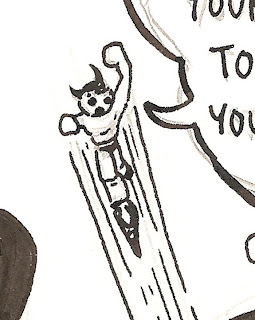 I love your Oulipian experiments... & hell yeah, why not throw in a little robotical rumbustification to boot!?

Gosh, I'm with you in hoping that I too can hold on and make it through this entire run. I bailed miserably early on AlphaBooks because I changed jobs and all my free time went scurrying away beneath the floorboards. Best of luck to both of us, buddy!

Also, I love the energy in your reproduced panel here.

If I stick with the alphabet, that will also mean six months of working on this weird random-panel comic. That's a heck of a lot of random panels, but I am hoping I will be game.

I really liked your Anchomatic 1200, Henry. Here's hoping the rest of your 'bots are at least that useful!