Bonus AlphaBot: C is for Curiosity

When I drew the Cooker for this week's Alphabots, I was not (apparently) done drawing lone explorers of deserted heavenly bodies within our solar system.

I could not get myself to go to bed last night without drawing one of my all-time favorite robots, one that has, in truth, more than once brought a tear to my eye, despite being nothing really but a big remote-control toy with some very fancy attachments. 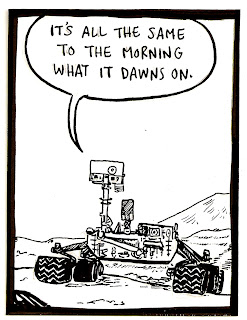 It's really up there (or out there, maybe, would be a better word) on the real surface of the real tiny point of light that we call Mars. People put it there.

It's out there to tell us what it finds. Eventually, it will break down, waiting to be recovered or discovered or never seen again. How can your heart not go out to it?

The dialogue was summoned via bibliomancy (and slightly modified), from a poem by Nuala Ní Dhomhnaill, as translated by Michael Longley.
Posted by Isaac at 12:50 PM