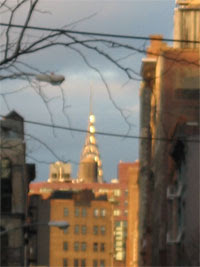 You can't really tell from this blurry photo, but the sunset light on Manhattan was very pretty on Wednesday afternoon. (As always, I was surprised at how easy it was to drive right into Soho. I grew up thinking of New York as some impregnable fortress of ultradense population, but if anything it's easier to drive into Manhattan than the centers of more automotive cities.)

Anyway, I was in New York for a reading, at the Housing Works Bookstore Café, being given by this year's Angoulême Grand Prix awardees, Philippe Dupuy and Charles Berberian. If you're familiar with their work, you'll know right away that it's of special interest to Mike and me, because Dupuy & Berberian collaborate in the same way that we do: 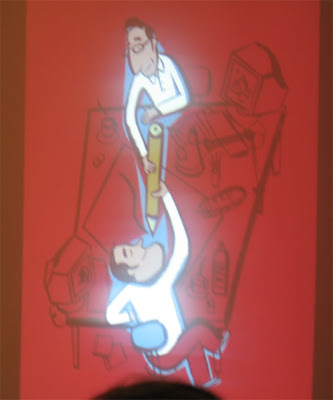 Each cartoonist holds one part of a big pencil, and they steer it as a pair of people steers a canoe. Inking is done by the same method.

The discussion was moderated ably by Matt Madden. He's on the left below, and Berberian is on the right.

If this looks a little like any pictures that Matt posts, it's because I was also shooting pictures for him from the same seat.

Dupuy & Berberian were funny, and articulate, and really very charming. They read aloud from the English translation of Maybe Later

, and talked through several of the Monsieur Jean stories that appear in Get a Life

, too. The audience was packed -- there's a lot of room in Housing Works, and people were crowded almost all the way back to the cash register, or at least that's the way it looked from where I was sitting. A substantial chunk of New York's alternative / literary comics scene turned out for the event, but I'm not going to list the people I saw.

One thing you may not realize about Dupuy and Berberian is that Berberian's hands are superhumanly fast. 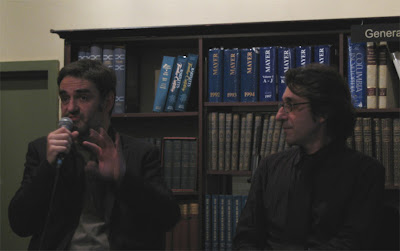 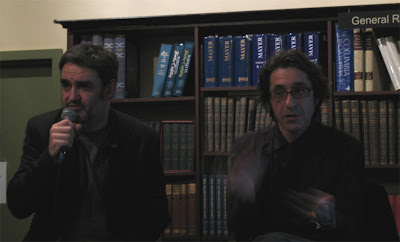 This accounts for their clean, graceful linework, obviously.

The highlights of the talk, for me, were pages from Dupuy's soon-to-be-released autobiographical meditation Haunted

and from the pair's joint travel sketchbooks, which don't seem to be forthcoming in English. Here's an image of Berberian discussing a page from Dupuy's sketchbook that depicts a salon in a hotel in Tangiers. 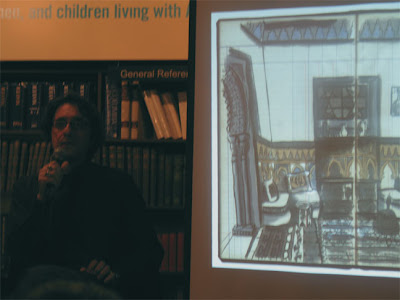 I've only glanced at Haunted, but it seems like a fascinating departure from the Monsieur Jean books: dark, introspective, and surrealistic. Maybe I'll let you know when I get a chance to read it.

After the reading, I did ask Dupuy & Berberian to draw a couple of monkeys for me. I felt like a dork asking, as I always do, but I know that the result will put a smile on my face years from now. 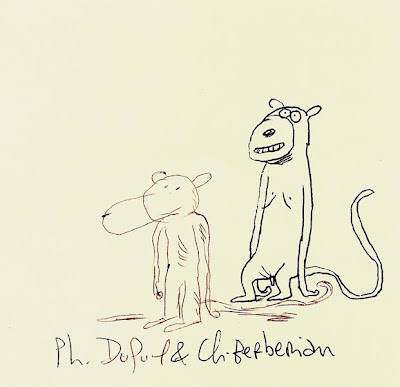 And yes, Mike, I did give each of them a copy of the Treatise.
Posted by Isaac at 2:21 AM

Dude, I am so glad you were able to make that event! How cool that you now have monkey drawings from Dupuy & Berberian in your sketchbook! And how great that you passed along copies of our Treatise (which of course features a little drawing of Dupuy on the back cover, along with his observation that collaboration à la Dupuy & Berberian isn't a competition, more like a game)!

It's an event I wish I could have attended. On the other hand, I may be able to buy some of their French-language travel diaries in Paris a couple of weeks from now, so it's a trade-off...

There's a link on the Drawn and Quarterly blog to here.