Shortly after Isaac posted about his "Twenty Minutes from Home" postcard series, I received one of his cards--number 17,676 in his years-long routine of postcard sending. It's always a pleasure to get to read a card in Isaac's handwriting (as opposed to his lettering, similar though it be), and occasionally he'll throw in a little doodle. This time, though, he asked a couple of ringers to provide a doozy of a doodle indeed: 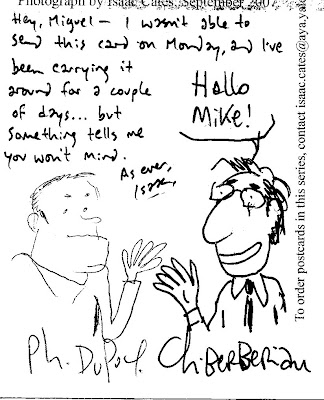 My thanks to Isaac for procuring this memento of his recent encounter with Philippe Dupuy & Charles Berberian, two of our heroes in the pantheon of collaborative cartoonists--and thanks to the artists themselves for their friendly cartoon greetings!
Posted by Mike at 6:00 PM