My Odd Postcards of New Haven

For a while last summer and fall I occupied myself with a project I called "Twenty Minutes from Home," which was partly an art project and partly just an excuse or exhortation to get me out of the house. I'm planning to start it up again soon, now that the weather is softening a little bit, to get my last long look at New Haven before I move north to Vermont.

The rules of the project were as follows: I would walk away from home for twenty minutes, exploring and wandering, and at the end of twenty minutes I would stop, look around, find something interesting, and take a picture. Sometimes I'd take another picture or two on the way back home. The best of these pictures got turned into postcards and sent around to my friends and correspondents.

It was a good project. I got to know New Haven better (even after living here for more than a dozen years), and I got to know my camera a little better, too. And, as I said, I got out of the house.

Now I've got a bunch of extra postcards of New Haven, enough to write to nearly everyone I know and still have leftovers. So I've decided to offer some of the extras to anyone who's willing to pay me a little for them (mostly to cover the cost of shipping). Let's say I'll send you a dozen for $3.00, or all twenty-four different cards for $5.00.

Here's a look at what you'll get:

A lot of the cards are what you might call "urban archaeology" shots, like this image of the underside of a small railroad trestle, out east of State Street: 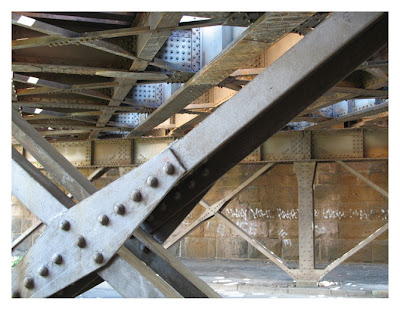 And here's a shot of some of the crumbling masonry on the side of the Winchester Repeating Arms plant, which has been derelict for years. 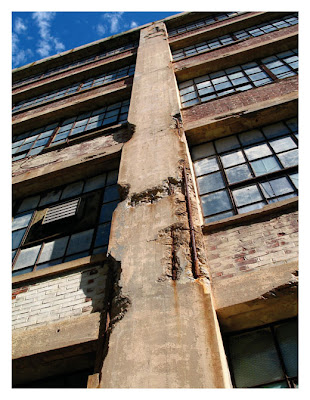 Those are pretty images, I think, but not the sort of thing you'd see on a typical picture postcard.

Some of the images are more specifically New Haven, like some of my shots of Yale buildings, or this image of the annual New Haven Road Race in progress down Whitney Avenue: 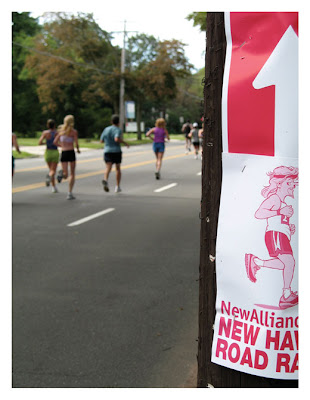 I like to try to juxtapose different sorts of things, like the old headstones of the Grove Street Cemetery up against a background of a Yale building. (I think they learn Engineering in there.) 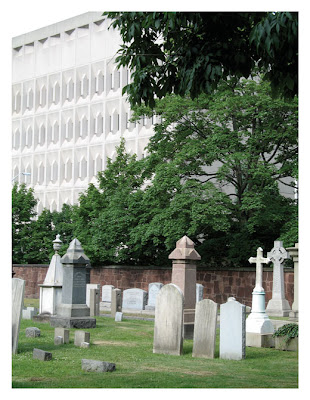 I also like little architectural details, which New Haven has in abundance, since it's an old town. Here, for example, is a satyr leering from the base of a flagpole on Beinecke Plaza: 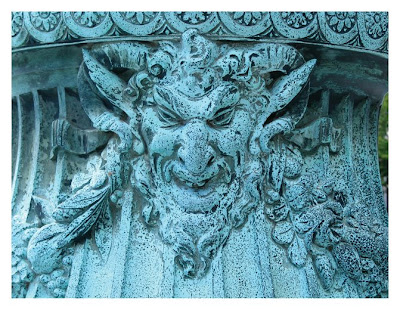 ... And here's a second-floor wrought-iron dragon's-head finial from a building on Orange Street. 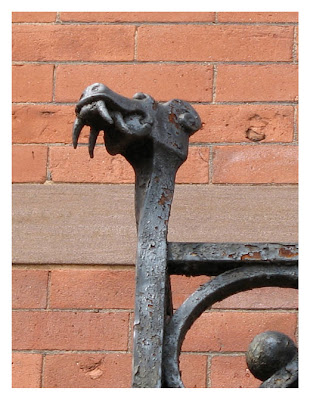 The building displays the name Emerson in the same ironwork, but I don't know whether that's still the name of the building.

,,, And sometimes, just to remind myself that it's not all urban archaeology, I go for a walk in East Rock Park. 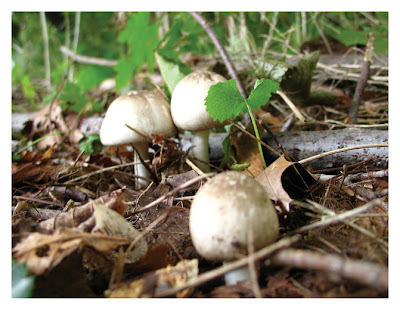 Here's a nice shot of nature and architectural detail overlapping. I saw pictures on the front page of the Register recently that looked a lot like this, but I was there first. It's the nest of a red-tailed hawk, I think, in the frieze up near the roof of the courthouse building, facing the Green. 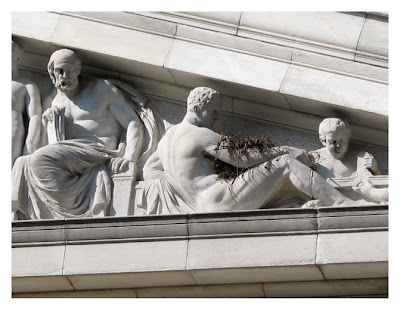 So: the images are things like that. I haven't posted all of the best ones.

Now, wouldn't you like a dozen of those? Here's a button that'll let you buy 12 for $3.00, postpaid.
If you want more of a particular KIND of card, let me know, and I'll skew the random sample over in that direction.

I'm not sure that I've received every last one of the cards yet, but I've received many of them in the mail, so I can vouch for their attractiveness and interest in postcard format.

I'll be expecting a nice follow-up from Vermont in due time!

I'm pretty sure you're two shy of the twenty-four I've printed up, Mike. I'll be sending the last "unopened" batch next week, and I bet this week's postcard hasn't reached you yet.