Of Droog and Doggerel 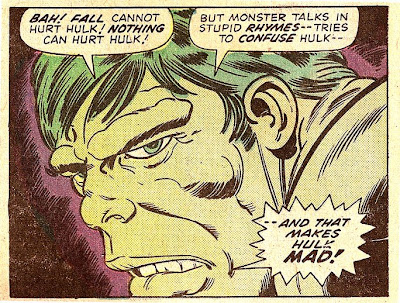 It seems only appropriate, after yesterday's post, that I speak to you about the sensational character find of 1975, Droog. According to this encyclopedia page Droog did appear one other time, but thanks to Joe Stinson and Wilkey Wong... 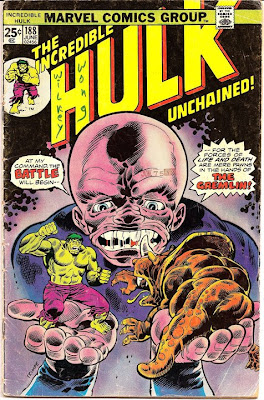 ...I've read pretty much his entire history in Marvel Comics.

Apparently, Droog is a mutated dog belonging to the Gremlin, that Soviet son-of-a-supervillain descended from the Gargoyle, who was Hulk's first foe. He looks a lot like a Triceratops, and he talks a lot like Len Wein writing doggerel couplets. Everything that Droog says is in rhyme, and actually it's kind of endearing. 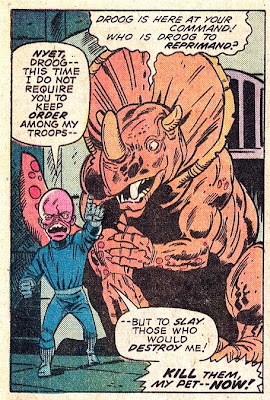 Like most poets, Droog is strong enough to smack the Hulk around.

I love this panel. It hits at least three of my childhood nostalgia centers: dinosaurs, superheroes, and Dr. Seuss. 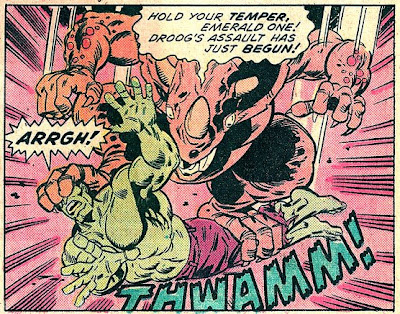 Writing dialogue for the Hulk around this time was a piece of cake, I'd bet. As long as he got in one "Hulk is the strongest one there is!" per issue -- and maybe "Smashing is what Hulk does best!" -- you'd be all set. But I imagine it'd get a little dull, which might explain the completely ridiculous Yiddishisms of Sidney E. "Gaffer" Levine elsewhere in the issue (I'll post those later), or the ridiculous smugness of a SHIELD agent named Clay Quartermain. Writing a monster that speaks only in rhyme seems like a nice counterpoint. That's probably what Alan Moore was thinking when he made Etrigan and Alexander Pope speak only in rhyme.

Anyone who has a passing familiarity with the Hulk knows that he's stronger than a sturdy wall, Droog. Are you throwing him at it just to complete your couplet? 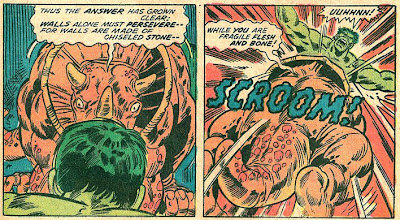 No, wait, I'm sorry. I call shenanigans. I don't care whether it fills out the meter of your line nicely, Droog. If there's one thing the Hulk isn't, it's fragile.

And, as it turns out, it's the walls that give way, crumbling around Hulk and Droog. Wein takes the opportunity to turn out a couple of narrative captions filled with quatrains. This leads to a panel that shows three things: smoking rubble, a footnote from the previous panel, and a footnote on the footnote, attributed to none other than Smilin' Stan himself. 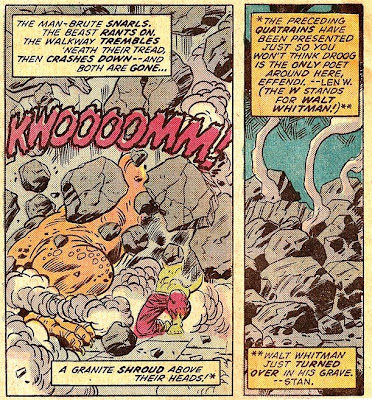 Probably Whitman is rotating because he was never much for rhyme himself.

As near as I can gather, after they rise from this rubble, Hulk and Droog get hit with some kind of bomb, and Hulk gets knocked under the surface of the earth. Droog is almost never seen again. I'm not sure what brought him into a single issue of Daughters of the Dragon, or who "Megacephalo," his new master, was.

But I got to thinking: brightly colored dinosaur, talks in rhyme ... Did Droog get some cosmetic surgery in the '90s and resurface with a new and even more friendly identity? 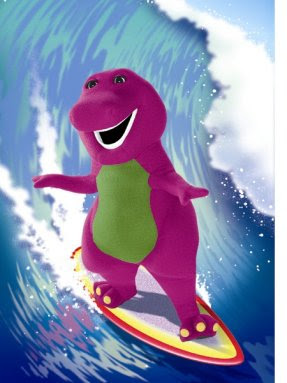 The only way to determine the truth, of course, is to have Barney fight the Hulk. Then we'll see who is the strongest one of all. 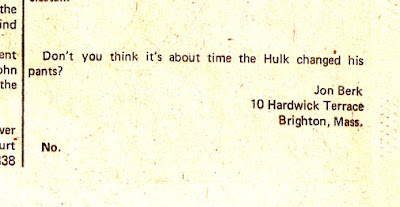 ...And people wonder why we include a letters column in our comics.
Posted by Isaac at 12:03 PM

Nice to see that Droog actually has a Russian connection, what with his Soviet master and all.

As for "Hulk is the strongest one there is," I encountered that line in a paperback reprint of the Batman vs. Hulk crossover. I forget the writer, but I think the art was by José Luis García López. Anyhow, that "strongest one there is" line was crucial to defeating the foe, as Batman used doubt on that score to provoke the Hulk into overcoming the otherwise unstoppable force of the Joker's insane imagination as magnified by the Shaper of Worlds.

So, like, don't underestimate the power of the catchphrase!

Len "Walt Whitman" Wein aside, I think if the Good Grey Poet is doing any coffin-spinning it's because his best known poem since Dead Poets Society is almost certainly his rhyme-infested "O captain! my captain!" Wikipedia repeats (with source) a Whitman quotation I'd heard elsewhere about his "author's remorse," as Becca puts it ("Damn My Captain...I'm almost sorry I ever wrote the poem"); and (this was news to me) apparently "O Captain!" was "the only poem anthologized during Whitman's lifetime" (Huh, the stuff you learn on Wikipedia; though I'm pretty sure an edit is called for: surely it was the only WHITMAN poem anthologized during Whitman's lifetime?).

Meanwhile, I'm really looking forward to those Yiddishisms, of course. And thanks for yet again vindicating my love of the lettercol.