You may already know this, because the news broke a couple of days ago, but Gary Gygax, the co-creator of Dungeons & Dragons, has died. I've been thinking a little bit lately about what D&D meant to me as I was growing up. Mostly it was a reading experience, for me: living out in the country, I was able to buy D&D modules and read them, but I didn't have a crew of nerds handy to play with when I was in junior high. I didn't actually play much at all until high school, and then most of my RPG time was actually in play-by-mail games, many of which owed a setting or a game mechanic or both to Gygax's creations. But I remained interested in D&D.

Reading the modules without ever playing them -- an experience that I suspect is more common for certain sorts of readers than it was meant to be -- was quite interesting. There's a way in which a D&D module is narrative, as it projects a particular sequence of events; there's also a way in which a module is more like cartography than story-telling. This dynamic is described very well by Dylan Horrocks in an essay called "The Perfect Planet", and if you've never read it, I strongly recommend it. I think there's some really interesting literary-critical work yet to be done on the subject of world-building, and Horrocks's essay seems like a very good place for this criticism to start.

A few of my favorite folks on the internet ("bloggers," I think we could call them) have posted nice reminiscences or notes inspired by Gygax's passing. Here's our cartoonist pal Ben Towle, pouring out a forty or perhaps a potion of giant strength, and here's our Yale Medievalist pal Carl Pyrdum invoking Gygax as an inspiration of a different sort. And here's Mike Sterling of progressiveruin.com reminiscing about playing the game, selling the game, and an ad drawn by Bill Willingham. Joel of Boing Boing Gadgets features one of Gygax's many splendrous random-encounter tables. (And perennial favorite Chris Sims also gets into the act, sort of.)

Anyway, I thought I'd say a little about my own experience. My debt to Gygax and D&D must be clear enough by now, from our Elfworld story and that recent alphabet of fantasy types, several of which (Paladin, Ranger) come directly out of the Players' Handbook or the Monster Manual. But I also know my interest in D&D runs deeper than the trappings of the Tolkien-Gygax fantasy genre. I think I learned from reading D&D manuals and from playing the game with my friends that there's a natural interaction between narrative and games. Outlandish though the setting is, the rules of D&D are supposed to create guidelines for what is plausible within the world of the ongoing story: what can the characters do? What if they get lucky? What might lurk in that dark forest or behind that secret door? Every narrative setting requires a set of guidelines for its own plausibility.

Also, playing D&D and imagining these rich alternate worlds -- which was especially true about some of the play-by-mail D&D derivatives that I played -- created for me a strong sense of what it's like to live in imagination separately but simultaneously with living in the real world. That's related to pure escapism (which gets a bad rap), and the feeling of getting "lost in a book" that will be familiar to anyone who is a serious reader, but it's also related to the way that an artist has to spend a lot of time living in his or her imagination, creating the world that doesn't exist yet.

Well, I've drawn a story that's about some of these things and none of these things -- a two-page piece that appears in the seventh issue of Satisfactory Comics. In honor of Gary Gygax, I have excerpted the entire story below. You can click on the images, of course, to enlarge them into legiblity. But I hope that if you enjoy them you'll also consider getting a paper copy of the comic. (You can, as you know, follow that link to buy a copy.) 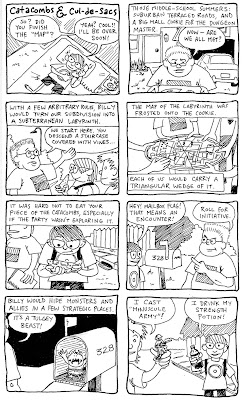 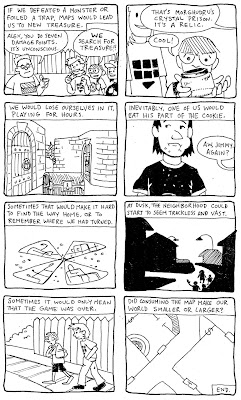