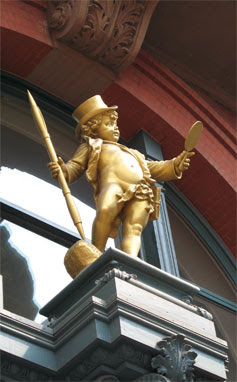 As usual, the best word to describe MoCCA was overwhelming. There are so many interesting (and uninteresting) comics spread out in those four rooms of the Puck Building that the only way to navigate the show is to settle on some sort of plan or compromise from the beginning. Throwing yourself into the crowd and looking at everything seems sort of hopeless to me, because it doesn't take long for eyeball fatigue to set in. 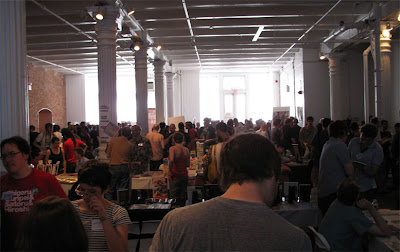 The weather this weekend wasn't too cooperative, either: I think it's a lot easier to get tired of browsing when the room's just a little too humid or just a little too hot, and even before the fire alarm there was just no way the Puck Building's air conditioners could keep up with the heat and the sun. I wasn't on the seventh floor much, but I've heard that it was steamy up there.

Anyway, for me the show was mostly social: I wanted to pick up any exciting new books, sure, but mainly I wanted to catch up with my friends from Artists With Problems and a few other comics pals. Getting our new issue into a few hands was a secondary goal, I guess. I didn't spend a lot of time roving around the convention floor this year, and I probably missed a dozen or more really cool minicomics just because I never passed by the right tables. 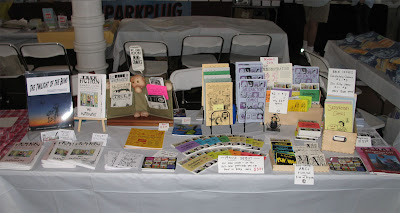 That's what our table looked like. I think I managed to sell or trade or give away about a hundred copies of the latest issue, and a few less than that of our little ABC books. Those aren't terrific numbers, but it was still fun to show them around.

Here are five things that made this year's MoCCA memorable for me: one unpleasant thing and four really good ones. 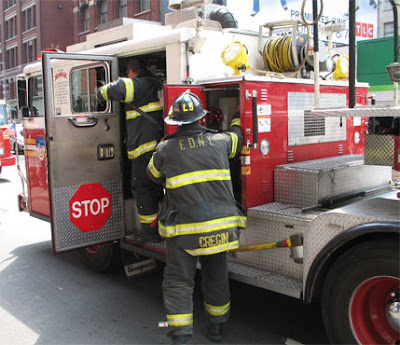 Midway through the day on Sunday, someone or something tripped a fire alarm in the Puck Building. For a while, business went on as usual, but eventually the Fire Department arrived and the MoCCA volunteers opened all of the building's doors and started herding everyone outside into the humid Manhattan heat.

In a way, it was a kind of happy digression from the convention: everyone was packed together on the sidewalk, and because it was clear that there was no fire,* there was a good deal of sarcasm and levity in the crowd. 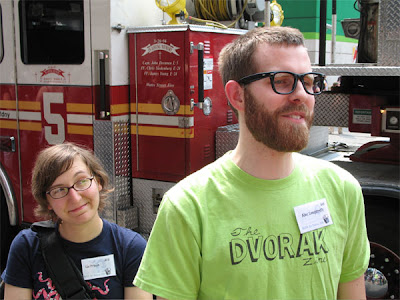 After a long ten minutes or so, the firefighters emerged from the building, and Alec Longstreth said, "Should we clap? We should clap, right?" There was a small ovation, after which Evan Dorkin quipped, "But they didn't buy any comics."

*Okay, actually, I just read Valerie D'Orazio saying that there was some sort of boiler fire in the basement. On the other hand, Evan Dorkin suggests that it was an overheated boiler but no actual fire. Anyway, there was definitely no sign of fire or smoke on the convention floor, and I think everyone assumed that it was a false alarm. 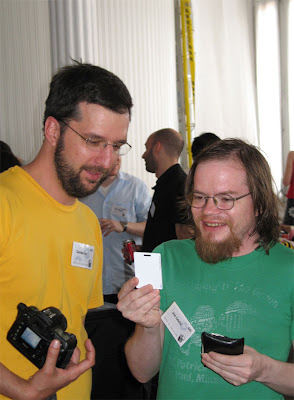 There's no sense going over this in a lot of detail, but I was really glad that MoCCA turned out to be such a nice aggregator for my friends in comics. I had a few conversations with my pals Damien Jay and Jon Lewis (pictured above), caught up with Tom K (pictured below) and met his fellow Minnesota cartoonist Will Dinski, caught up with Cathy Leamy and Robyn Chapman, bumped into Jason Lutes, had dinner with Bill Kartalopoulos, and shared a table with Tom Motley (who somehow managed to escape my camera completely. 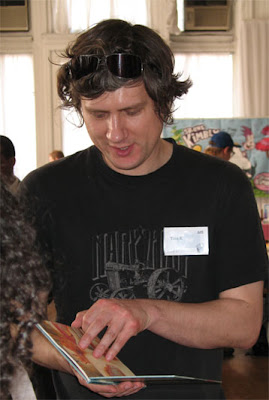 It was also nice to see my former students Caitlin McGurk and John Hagan, who had a few minis to sell from our table. On Saturday, John showed up in a t-shirt that proclaimed his affection for his fictional comics doppelganger: 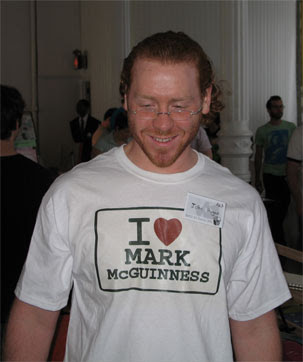 I also caught up with Shawn Cheng and Matt Wiegle of Partyka, whom I caught in action behind their table. 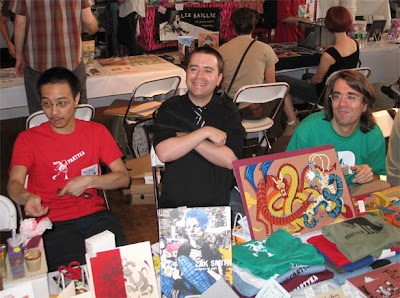 (That's Shawn on the left and Matt on the right, with Sean T. Collins in the middle.) 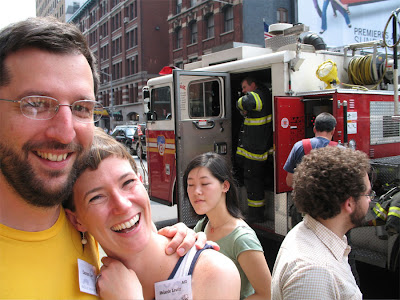 Finally, here's a shot of my friend Damien with his soon-to-be-bride Melanie "Minty" Lewis. Even in the midst of a heatwave fire alarm, they look like they're having a fine time.

As I said, I didn't do a lot of shopping, but I still came home with more than a week's worth of reading. Here are some of the things I'm most excited about: 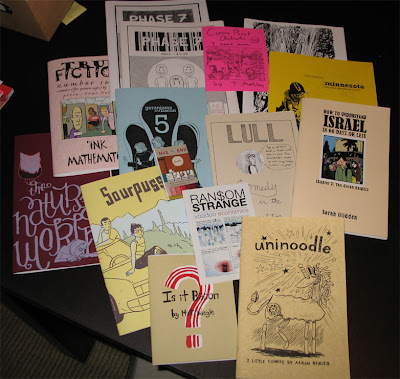 And these are just the ones I got in trade for our new issue. I encourage you to seek these comics out. (See links above, if there's no link in this paragraph.) They're definitely some fine reading material.

*And hey! Check out my meaty paws setting up some comics in Sarah's photostream! 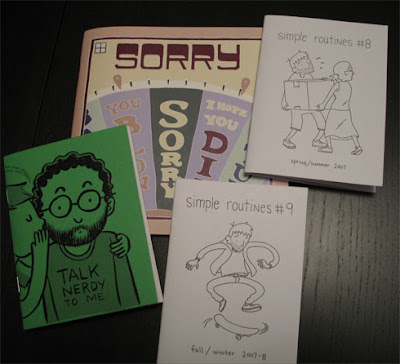 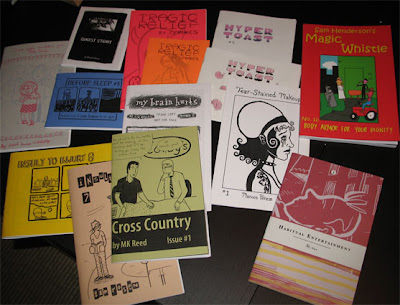 This is a selection of the minis I bought, followed by a selection of other minis I got in trade. I don't know what's inside most of these yet, but if something emerges as deserving special attention, I'll try to make a follow-up post later. 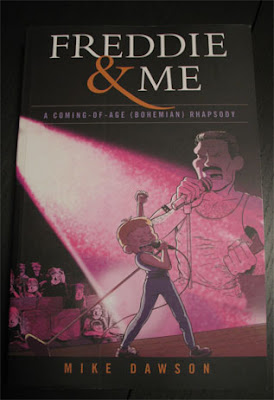 There were two larger books that I'm really excited to have brought home. One of these was Mike Dawson's Freddie & Me

, which obviously deserves a longer review-style post after I read it. It looks great.

Mike was promoting the book at his table with a huge figure of Freddie Mercury. Here he is: 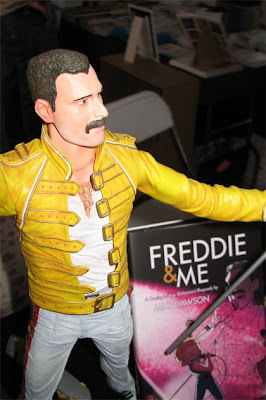 Mike's wife Aliza encouraged me to take another photo of the other side of the figure, which she assured me was remarkably detailed, but I declined.

The other book I'm really excited about is an old copy of the out-of-print Incredible Upside-Downs of Gustave Verbeek. You can now remove that book from my Christmas list. I've been looking for a copy for a long time, and before the show even started I found one at the table of the excellent Belgian publisher Bries. 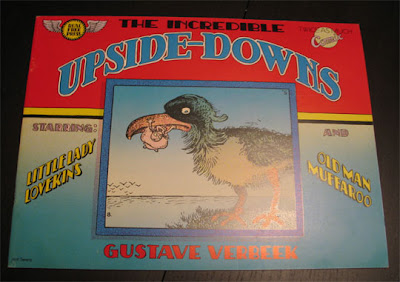 A. I had a chance to tell Scott C. how much I am enjoying the framed print of his Ninjas All Over the Place, which I received as an awesome Christmas present and now have up over my desk.

B. I had a brief chat with Zander Cannon about 24-hour comics and collaborative comics.

C. I gave a copy of the our new issue to Kazimir Strzepek and showed him the little swipe of his characters that appears on page ten of our story. He seemed really pleased to see his little guys there (and in full color).

D. In general, people seemed pretty impressed with the way the new issue turned out. Tom Hart said he had really enjoyed constraining us, and Brendan Burford said the new issue looked really great. (He also said "I love Satisfactory Comics," but I'm not going to hold him to that.)

4. An Awesome Minute or Two with Lynda Barry

Here comes the highlight of the show for me. Lynda Barry was at the Drawn & Quarterly table, signing copies of her awesome new book What It Is

, which I recommend strenuously to anyone who wants to write, draw, or remember. (Seriously.) If she hasn't officially been designated a national treasure, I think Congress needs to get on that at top speed. 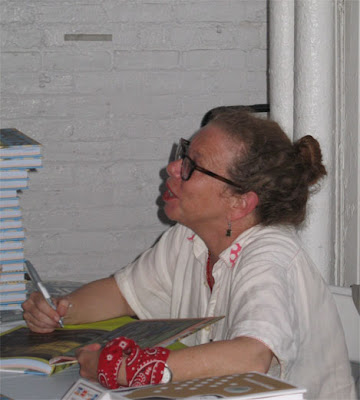 There was a super-long line for her signatures, and I hadn't even brought my copy of What It Is

, so I tried not to take up too much of her time. But when she saw my nametag, she said, "Have we met?"

I told her we hadn't, but that she had met my collaborator Mike Wenthe, when she was in DC for the PEN/Faulkner Awards. She said, "Then I know your work! You guys draw kick-ass demons!"

There you have it: a five-word highlight of a busy, crazy, intense weekend:

And yes, hard-core fan that I am, I did ask her to draw a monkey in my monkey book. 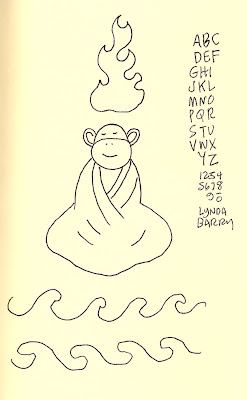 Yep. He was just walking around and taking it in, not presenting or signing or selling. I think he had come in for the convention just on a whim.

Apparently, beards are in with the cartooning crew: Jon Lewis's is longer, Damien's is present. Hm.

Also, how rad is it for Lynda Barry to say she knows your work? Almost as rad as that monkey drawing she drew for you. In short: rad.

Hey Isaac, it was awesome to see you! The new comics look great and I can't wait to read them. You are totally rocking some beautiful blackletter on those covers. Yay for MoCCA, and I'm kinda sad that it's only once a year!