With these beasts, I thee wed

Recently I had the honor of preparing a custom ketubah for the wedding of my brother-in-law Jon to his bride Victoria. A ketubah (plural ketubot) is a Jewish wedding document that essentially functions as a contract specifying spousal duties—traditionally, the duties of a husband toward his wife, though many modern ketubot specify reciprocal or indeed identical duties between two partners. The ketubah fundamentally is a legal document requiring the signatures of witnesses, but for centuries ketubot have also been treated as works of art, framed and displayed to showcase Hebrew-character calligraphy surrounded by illustrations of all sorts, and Jon and Vic had some notable specifications for the illustrations of their ketubah.

For the overall layout, they wanted something more or less in the idiom of a mandala or thangka, which accounts for the framing elements within and around the space of the page. More specifically, they also wanted “as many crazy beasts as possible”—naming such fantastic critters as a shedu and such mundane animals as a Neapolitan mastiff. That’s how they ended up with the following eight beasts—basically, cartoons—on their ketubah: 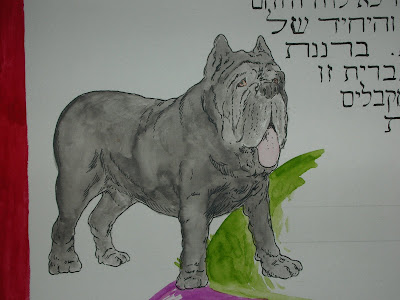 A Neapolitan mastiff, as a sort of totem for Jon; 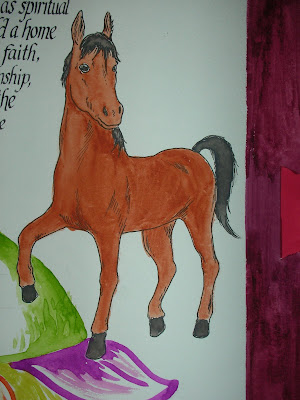 A “straight-up horse,” as a sort of token for Vic (and, thus far, the best drawing of a horse I’ve managed to produce); 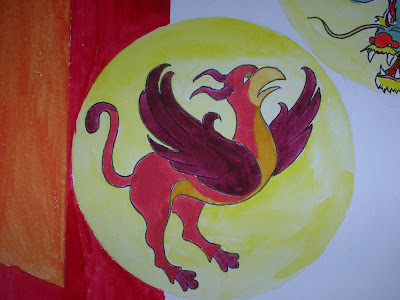 A griffin, based on a manuscript illustration of the mythical Jewish bird Ziz, which faced opposite 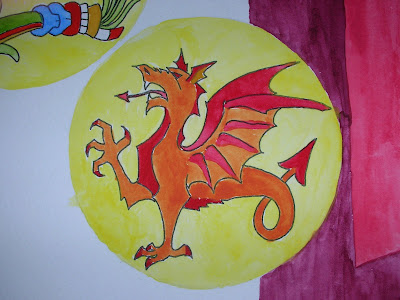 a wyvern, which perched below an image of
Kukulkán, 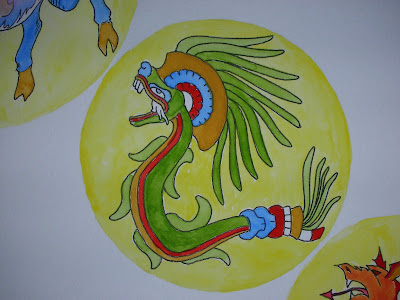 the plumed serpent who is the Mayan equivalent of Quetzalcoatl, and who in turn looked across towards 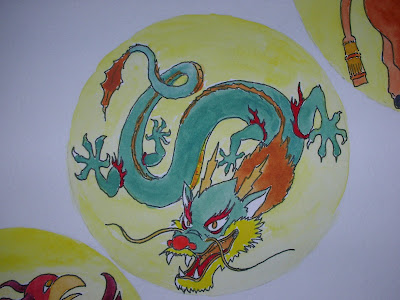 A Chinese dragon, which guarded the middle regions of the air below the presiding figure of 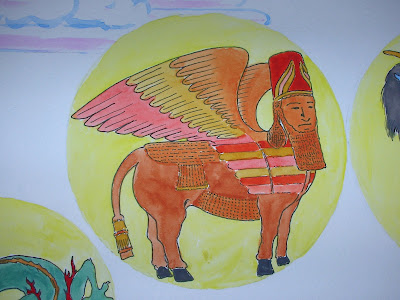 A shedu, who in turn faced 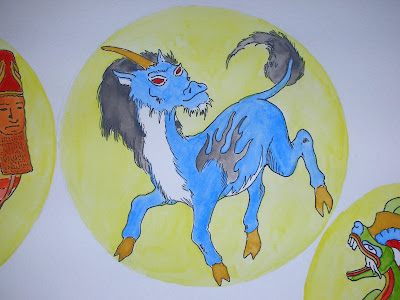 a bright blue kirin, which satisfied Vic’s taste for unicorns without my having actually to draw a standard European unicorn.

It was a pleasure to produce this document for Jon & Vic, though I had some struggles with tools along the way. I hadn’t brought a full complement of art supplies to England, and I balked at paying $40 or more for a new T-square, for example, so I ended up ruling the lines for the calligraphy with a standard plastic ruler from W. H. Smith. I helped line up my ruler by printing out solid and dashed lines in boldface on standard typing paper, which I laid underneath the Cotman watercolor paper of the ketubah itself: the lines from the printed page were faintly visible through the page—just enough for me to line up the ruler with some degree of uniformity between the lines.

Once the lines were ruled, I lettered them the old-fashioned way, with Speedball nibs fitted into a Koh-i-noor holder and dipped into a jar of Higgins Eternal ink. Each dip of ink sufficed for about a line and a half of lettering at best, with a total of sixty lines between the Hebrew and English halves of the ketubah. I did each side straight through at a stretch, though I needed a considerable break between halves to allow my clenched and cramped hand to recover from the stresses of lettering.

When it came time to ink my penciled creature sketches, I knew I couldn’t use my favorite inking tool, a brush-tipped pen, because its ink isn’t waterproof and I intended to color the drawings with watercolors. To be on the safe side, I decided I had better test just how eternal and waterproof that Higgins Eternal ink really was. Answer: not as much as you might think! While the test lines that I scribbled on a separate page never washed away completely under running water, they definitely bled a lot. By contrast, the ink from my Rapidograph held up very well indeed—well enough that I knew I’d have to use the technical pen instead of a nib pen. I was sorry to lose the calligraphic line variation of the nib, but I figured that color would make up somewhat for the dead flatness of the Rapidograph line.

The coloring also involved some challenges with my tools. In Oxford I had purchased a boxed set of watercolors, brushes, and palette at a big discount, only to learn that with brushes, at least, you get what you pay for. I used one of the new brushes for about five minutes, applying big fields of color in the margins, before I gave up in disgust: with every other stroke, bristles fell off, leaving unsightly black specks among the brushstrokes. I got much better results when I dug out one of the few trusty brushes I had brought with me from the States—no surprise, given that the better brush probably cost as much by itself as the entire discount watercolor set cost.

Cheap though the brushes were, the watercolors themselves were decent. They offered a different challenge, though, in that they assumed some knowledge of color theory and watercolor mixology. I confess that for my previous coloring efforts I’ve usually relied on watercolor sets with a pretty wide range of prefab intermediate colors such as orange, brown, and purple alongside the primaries. My British watercolor set had more separate tubes of color than I was used to, but the range of values was more restricted: four or five kinds of red, blue, and yellow, a couple of tubes of white, black, and greys, and a few brownish tones as well. Of course I knew from elementary school that red and blue together would make purple, for instance—but which red and which blue would make the purple I wanted? My first attempt churned out a color a lot closer to dark brown than the rich grape-like purple I’d been hoping for. I ended up both having to try several times to get the mixed colors I wanted and to settle for different colors altogether from what I’d expected, when my repeated efforts kept missing the mark. The Chinese dragon, for example, was supposed to be more teal than jade-green, but teal wasn’t really happening for me, alas. I discovered a new dimension to my PhotoShop envy, even though PhotoShop would have been no help for this one-of-a-kind document.

Ideally, I would have liked to produce the ketubah on an inclined artist’s table with a full-size built-in lightboard and my trusty large T-square; with truly permanent, waterproof ink suitable for nib pens; with slightly thicker paper (I’m afraid I punctured the page with a compass while ruling the disc around the shedu); and with an accurate technical chart for mixing colors. Maybe I’ll be better equipped if I ever make another ketubah, though since it’s been ten years since my previous ketubah (for my own wedding) I won’t be holding my breath for the opportunity! Still, I’m grateful to Jon and Vic for the chance to make this one, not least for indulging my fondness for cartoon animals. The ink on their ketubah may not be eternally Eternal, but here’s to a life-long future of wedded bliss.
Posted by Mike at 5:44 PM

That's some awesome work, Mike. And thanks for posting all the details about tools and technique.

It's hard to choose a favorite critter from among those, but I think you've convinced me (without trying) that we really ought to have more dragons (and dragony things) in our comics. Matteu should have been riding one of those, instead of a horse!

For what it's worth, it is possible to dip a brush into Rapidograph ink. I've seen people do it. (Rapidograph ink bottles are actually kind of nicely designed for admitting a watercolor brush, if you unscrew the dropper.) The problem is that the ink will probably spoil your brush if you don't clean the brush carefully (with Windex?) after use.

Beautiful. Mythical creatures are awesome, but somehow I'm not comfortable with putting them on a ketubah. (What would the kids think?)

Just a tidbit - that dragon image would have never made it in Imperial China, as five toes per paw were reserved to the imperial household alone, and violators were chayav mita. Four toes were the norm, but at a time even four was reserved for nobility, and everyone else had to do with only three.

Hi,
This is a great concept for the Ketubah! I would love to feature your Ketubah in my blog. You can check my other Ketubah articles at http://mikanovsky.com/blog

Do you have a picture showing the entire Ketubah?

Thanks for the kind words, Moshe--particularly appreciated as they come from someone who has produced some very fine ketubot, to judge from your blog. I do have a full image and I'll be in touch via email.