With this year's MoCCA Festival just a couple of days away, I'm happy to say that Mike and I will have a handful of new comics at our table (although Mike himself will not be there; instead I'll be joined by our pal Tom Motley). The new stuff is also available to you, our website reader, for just a pittance. Here's a pair of our newest publications, both of which are small books containing illustrated ABC poems: 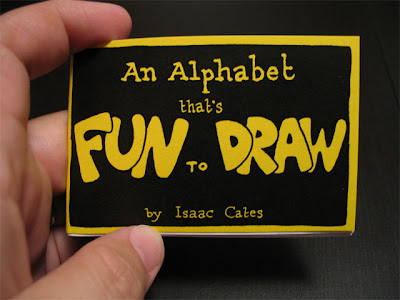 My "An Alphabet That's Fun to Draw" is a republication of my page from the perennial favorite (and nearly out-of-print forever) "_____ Are Always Fun to Draw." I had always meant to republish that poem at a larger size, because many of the drawings have details (or fun) that don't show up well in their original (reduced) context.

The book will look a little bigger than that if it's not being held in a huge, hammy meathook of a paw.

Here's a couple of pairs of pages: 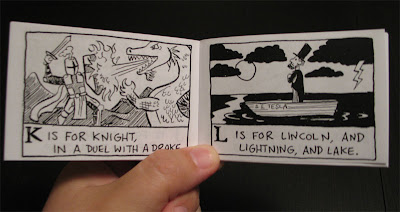 Who doesn't like to see fantasy dragon-bashing melee on one page and our sixteenth president in danger of electrocution on the facing page? 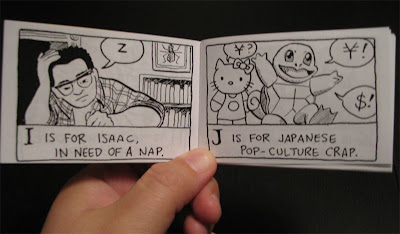 And although the absence of a beard in this self-portrait dates it a bit, who hasn't felt that same need for a nap? And who hasn't imagined the same dialogue between Hello Kitty and Squirtle?

If you want more explanation of that project, or a list of the fun-to-draw things that appear in the book, click here for further details.


Our other little ABC book, aptly titled "Abecedarium," is written and drawn by Mike (as you can see on this cover): 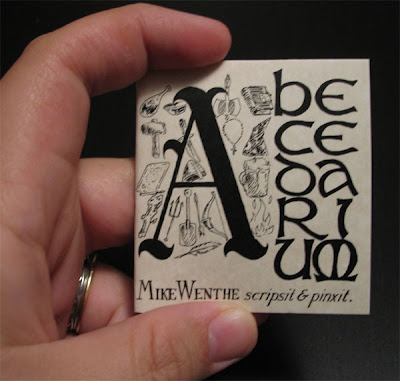 (Again, if your paws are more petite, the book may appear larger.)

This little gem of a book picks out twenty-six of Mike's "Fantasy Folk" illustrations (originally created to decorate the margin of our submission to the second volume of Elfworld) and describes these twenty-six folk with a poem in rhyming couplets of Middle English. (Mike has posted a glossary of the more obscure Middle English words in the poem, but really it's not at all difficult if you read it aloud.)

Among the folk thus described are a Hermit, a Nymph, a Wodewose, a Fairy, and an Undertaker; also appearing are a Pedant and a Scribe who may look a bit familiar... 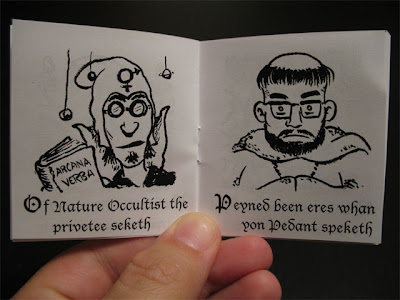 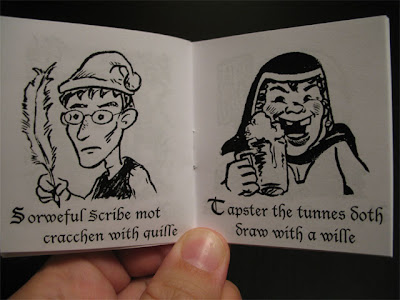 These two happy little books are available at our Storenvy shop.
Posted by Isaac at 6:01 PM

I urge you to reconsider your view of the noble Squirtle. He is a prince among men, or would be, if he were a man.

How come you used long s in your cover, but not with the fantasy book? Is it just a computer font?

Also, the scribe looks like Mike. How cracchen be he with quille, tis desfascile to descertaine.* I gotta get me one of those books. Bonus points if the word "socage" is worked in there somehow.

*You see, I have absolutely no idea what I'm talking about here.

I am embarrassed to admit it, but yes, Mike's "Abecedarium" is typeset with a computer font, and not written by hand. I was intending to letter it by hand, but I found a font that looked very good, and I thought the project was "book-like" enough to want a more regular type.

As for the long S, you'd have to ask Mike for his motives. I believe it's based on some calligraphy in the Ellesmere manuscript.

There's a good reason why the scribe should look like me. I'm just glad someone who knows what I look like thinks there's a resemblance!

And yes, the letterforms for the Satisfactory Comics cover are all based on letterforms in the Ellesmere Manuscript of the Canterbury Tales, including long S when it's in the middle of a word. I was specifically looking at a color scan of the opening of Chaucer's beloved Tale of Melibee--the prose highlight of his most famous poem. I was delighted to find a spiffy "-ry" ligature to use for the end of "Satisfactory," but I was kind of let down by the available majuscule S. Still, scholarly accuracy demanded that I follow the lead of the much earlier (and more authentic) scribe. Because we're all about scholarly comics, here.

And though I'm usually a rabid proponent of hand-lettering, I agree with Isaac that this project lends itself to set type, and I like the font he chose (a smart little number by name of Lucida Blackletter, unless my eyes deceive me).