Poor Matteu. It looks like I'm going to have to face the fact that I won't draw the next strip for a couple of weeks. In a day or two, I'm going to have to pack up my drawing supplies for the big move to Vermont, and I don't foresee having time to draw anything before that happens. (I'm too busy packing books, recycling unnecessary papers, and writing my moving cards.)

But digging through all of my stuff in anticipation of the move has turned up some treasures, and I'm going to share a few of them in this post. More will be forthcoming, though I think they may have to wait until I figure out the internet service in the new place—so you might not hear much from me until it's nearly July.

Anyway, in keeping with the theme of the week, here's a little gallery of the postcards I've sent around, over the years, to announce a change in my mailing address. All of these images can be enlarged with a click.

The first one was drawn by our friend and sometime contributor Jesse Reklaw, way back in the summer of 1999, when I switched apartments in Baltimore. 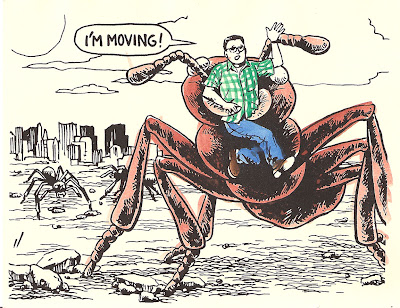 (Drawn by Jesse Reklaw and hand-colored with watercolor, clumsily in this case, by me.)


When I moved back to New Haven after that summer, I asked another friend (and sometime contributor), Scott Koblish to provide me with my favorite dinosaur, the parasaurolophus. 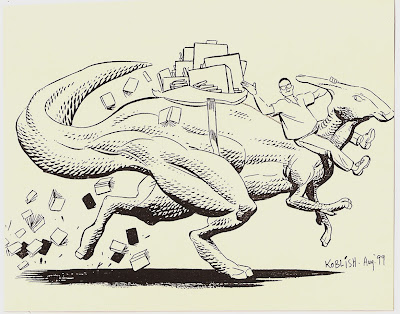 (I think this would have been watercolored, too, if I had sent this copy out, but I don't have any color copies.)

I stayed put for a few years, and when it came time for me to change apartments in New Haven, I circulated four different designs, all of which I watercolored once and then color-photocopied:

This one's by our fellow Mapjammer Damien Jay, and it features a few creatures I created for the Demonstration book and Elm City Jams. 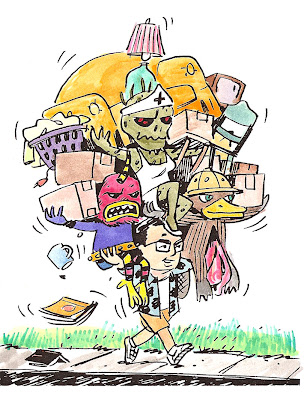 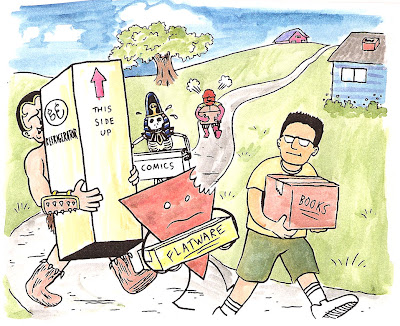 ...And surely you recognize the hand of my collaborator Mike, even if you might not recognize every single one of these Satisfactory Comics characters. 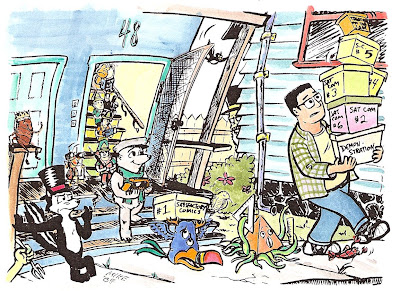 Finally, Tom Motley drew me getting help in the move from some of my creatures from the Demonstration sketchbook. Oddly, I did not hire these movers the next time. 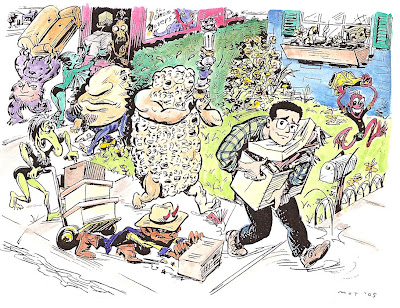 This year's moving cards are both on a Burlington theme. Both of these were colored by the artists and printed on real postcards instead of plain cardstock paper.

Here's one by Shawn Cheng, of Partyka, featuring Champ, the lake monster native to Lake Champlain. Shawn was working from life here, not from photo reference. 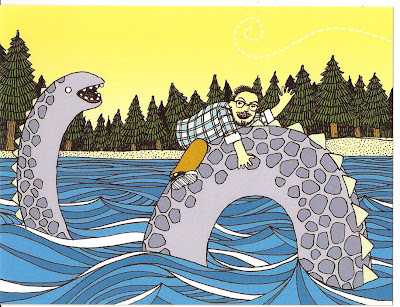 ... and here's one drawn by Shawn's co-Partyker, Matt Wiegle. 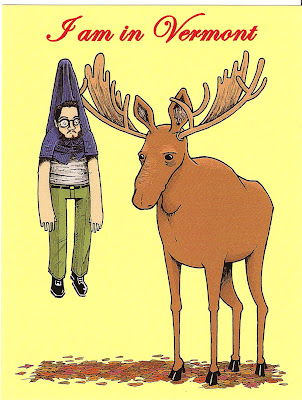 Doesn't Vermont look like a lot of fun? Personally, I can't wait to get there. I just wish these all these comics of mine would pack themselves.

Possible topics for the comment section: which cartoon is the best likeness, and does that matter?
Posted by Isaac at 7:10 PM

Nice, Kaiser! I've seen most of these before, but not, in fact, all of them, so I'd like to thank you for gathering up these postcards in one, um, post. (I'm seeing Jesse's and Wiegle's for the first time, and they're big fun; there's a real pair of themes, here, isn't there, O rider of strange beasts and employer of cartoon movers?).

My first reaction was to admire and enjoy how fun and well-designed almost all of these are. My second reaction was to recognize that the exception to the good-design standard is my own cluttered drawing. In other words, I can tell who the professionals are here! You can be proud that they're your friends, collaborators, and even former students.

Finally, to answer your closing question, I think that Shawn Cheng's likeness looks the most like you. Whether or not that matters is a thorny subject, actually. For the purposes of a moving postcard, where the images are all basically one-offs (and single pictures at that), I don't think it really matters. We know who the main actor is in these scenes, after all.

It might matter more if you were trying to tell a story about yourself, particularly non-fiction. It still might not entirely matter--Lewis Trondheim is not, as far as I know, a bird--but I still chafe at what I took to be a somewhat irrelevant objection when a reader of the first version of SatCom #1 protested that my self-caricature didn't look like me. On the other hand, I improved the likeness in the second version of that issue, so I can't have disagreed altogether with the objection.

Anyway, these are lots of fun and I look forward to receiving Vermont moving card #2!

Have a good move! Vermont is beautiful.

I think that while Damien Jay's cartoon best exemplifies what your move is going to look like, Shawn's best captures what your luddic attitude toward cavorting with a lake monster.

Is it bad that my first reaction was: Wait, Isaac has facial hair now?! When did that happen?!

My second reaction: I totally want the Vermont image on a T-shirt.

Tara, where have you been? I've been wearing a beard (and mustache) for about a year and a half — since before Satisfactory #7.

I'm up in Vermont now, but still too surrounded by cardboard boxes to put together a proper post. I can say this, though: it's a nice place. I'm looking forward to getting to know it better.