Today's "Doodle Penance" asks a question similar to one we've answered before. This time, the google query we missed was "make your own kirby character."

I said before that Ed Emberley is probably the first place to stop for these "how to draw" questions, but there's a big gap between Emberley's design sense and Jack Kirby's, so let's try to approach the question of Kirby's character design. It's a huge topic, actually, and looking at Kirby's monster comics will certainly give you a different set of examples from the ones you'd see in The Eternals or The Demon.

But let's try to generalize, working mainly with Kirby's best-known work, in the superhero genre.

Even here, there's more than one type of Kirby character: 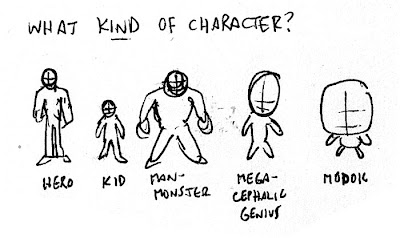 Let's suppose you're thinking about a heroic character, someone on the periphery of your main tale, but a fellow you could trust with interstellar patrol duty. You're going to need some headgear, and here you have plenty of options. 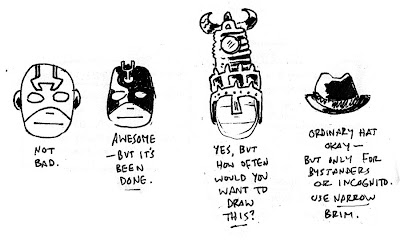 In general, I try to think of kachina designs when I'm thinking about Kirbyesque design elements. 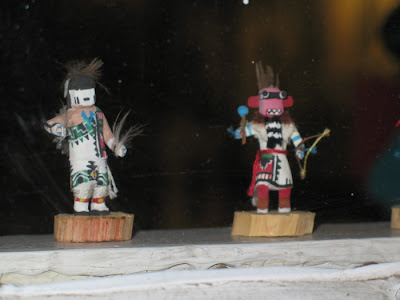 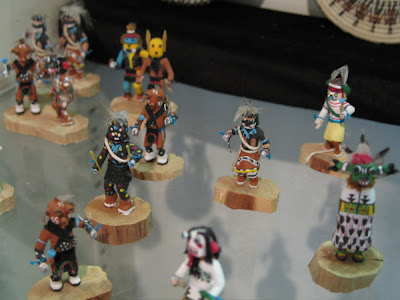 Good design motifs include raised discs, sunbursts with triangular teeth, branching horns or forks, rectangles the shape of a Pink Pearl eraser, and shiny parts. As ever, spot blacks sell the drawing. Don't be afraid to lay down the ink. 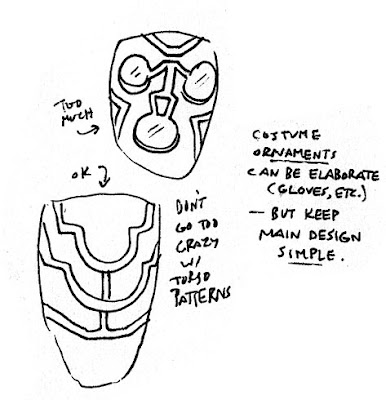 It's tempting to put just as much design insanity into the rest of the costume as you see in the hat. But I think that simplicity is a good rule here. Remember that when you start drawing this guy, there's going to be a lot of bending and folding, and a lot of distortion due to perspective. A simple bodysuit, maybe with a few bold patterns, is what you want here.

So your next step is to start assembling the various parts. Try to keep a design "theme" going: if there are dots or circles in one place, bring them back again elsewhere. 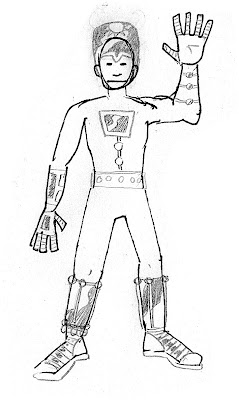 Here's a fellow I came up with, and a hastily colored version of him in a more Kirby-style pose. Anyone have a name for this guy? 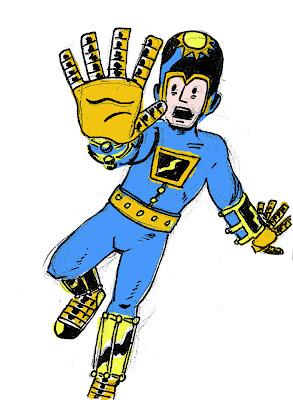 Mike, what do you have this week?

—Why, I have my own Kirby character, of course. Like you, I was puzzled at first by the sheer variety of Kirby designs available, but I decided to stick with what I know best, which is Kirby art from the first hundred issues of Fantastic Four as reproduced in cheap black-and-white editions, so here's my quick black-and-white drawing of a would-be Inhuman named Handy: 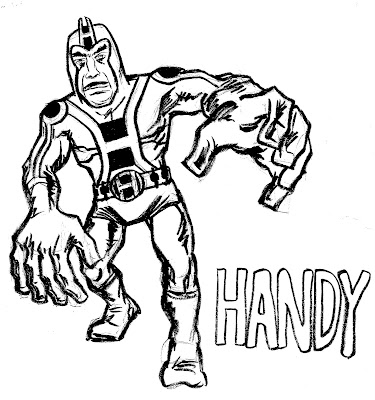 I worked from a few typical Kirby design principles:

1) Avoid drawing ears where possible.
2) Put the character's initial on the costume, even if character is from outer space or otherwise unlikely to use the Roman alphabet.
3) Hunch 'em up.
4) Shady characters have wide mouths.
5) Squared-off digits.

And since I was thinking of the Inhumans:

6) Exaggerate one trait or physical feature.

The only problem with my choice of exaggerated feature, Handy's hands, is that it's easily mistaken for the extreme foreshortening also typical of Kirby poses. But I assure you that his hands are not meant to be that close to you, the viewer: they're just big-ass hands.
Posted by Isaac at 4:14 PM

So apparently we're in agreement that the Inhumans were a sort of high point for Kirby's design sense? You really can't beat that Black Bolt design with a stick.

I think Handy has one giant hand, and one that seems gigantic because of the foreshortening. The question is: does his Terrigen mutation allow him to control which hand is super-sized?

I thought the Eternals were well designed, the Celestials are a particular stand-out for me. The New Gods a little less so, I think. Not much to Orion's costume when you get beyond that helmet.

I would also argue that Modok falls under the mega-cephalic group, and that Mr. Fantastic fell squarely into the "hero" category, even though he was smart, he was set up as more of a protagonist.

i would also keep the Buxom Dame as one of his heroic character types, as opposed to relegating it to the same status as innocent bystander.

I agree with you about the female characters, Scott—I didn't mean those initial options to seem exhaustive. I just wanted to make a joke about cranial exaggeration.

The Celestials are awesomely designed, though I think it would be hard to draw them over and over in action. I think part of the reason the costumes are so plain in New Gods is Kirby's knowledge that these characters would be in motion a lot. (Also, the Astro-Harness is plenty detailed, right?)

Isaac, I'm sure you're right about Handy's mutation. I bow to your superior Kirby knowledge, which correctly interprets my own Kirbyesque designs for me in my ignorance!

Nah, that "which hand is huge?" mutation is probably the sort of thing that a later writer would retcon onto the third appearance of Handy, twenty years after his two background appearances in early FF issues, in which Kirby accidentally made the wrong hand huge the second time. A more logical writer would simply say they were twins—maybe named Hendy and Handi—like those blue guys in Invincible.

Don't know which blue guys you're referring to. What's Invincible? (When it's not a Pat Benatar song, that is.)

Invincible is a fun teen-superhero comic written by Robert Kirkman. I haven't read the whole run, and I don't think I'm going to finish it, but it's smarter and more fun than 95% of the superhero stuff being published nowadays.

The Mauler Twins are apparently one guy and his clone. I had forgotten that.