The Ten Doctors by Rich Morris

Like many a young nerd who watched PBS back in the day, I was once a pre-teen fan of the BBC science-fiction classic Doctor Who, featuring a long-lived, time-traveling alien from Gallifrey, a canny Time Lord known only as the Doctor, who moved through space and time in what looked like a '60s-era British police call box and who could regenerate his body when catastrophe threatened him with death (which coincidentally tended to happen whenever an actor was leaving the title role). So taken was I with the program, and particularly with the seemingly definitive performance of the great Tom Baker as the fourth incarnation of the Doctor, that I briefly took up knitting in order to begin my own version of the fourth Doctor's trademark extra-long scarf (I never finished), and for many years I wore a version of the fourth Doctor's trademark hat (which sadly went up in flames in a car fire during college).

More to the point of this blog, I even made a bunch of Whovian doodles back in the day. Here are some selections from a page full of Fourth Doctors, K-9 robot dogs, and TARDISes I drew in fifth or sixth grade: 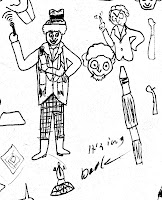 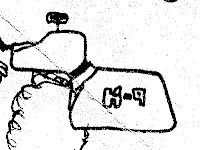 I even made a pitiful stab at Chris Ware-style toy construction (long before I ever heard of Chris Ware) with these notes on how to make a model Dalek out of washers, dowel, and a container of Dry Idea deodorant, while the Fourth Doctor himself could be fashioned out of dowels and cotton balls: 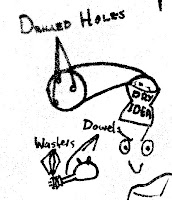 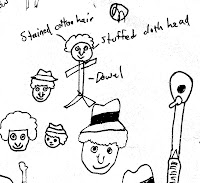 Anyway, time travel to my own misspent youth is profitless, especially when I really started this post to shout this joyous news from the laptops: not only has Doctor Who been revived in a successful and entertaining new BBC series—which I think is fantastic—but Rich Morris, Who-fan and cartoonist extraordinaire, has now completed his mammoth feat of comic-strip fanfic, the 247-page magnum opus The Ten Doctors, featuring all ten incarnations (thus far) of the Doctor: 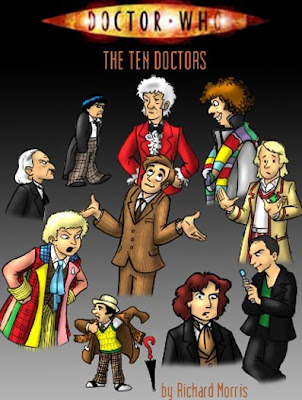 You can read the first nine pages here, and you can download the whole shebang here. I still haven't read the whole thing myself—I've read it off and on since last spring, checking in every now and then to see how much further the story has advanced—but I'm confident that Rich Morris has kept the mix of humor, action, and convincing characterization intact to the end. His cartooning is sharp—sharp enough to make for compulsive reading even though most pages are scanned direct from pencils, with no ink or color—and his caricatures of the various actors are economically recognizable without designy cheating. This story has appealed to fans of both the classic Doctor Who series (1963–1989) and the revived series (2004–present), whether or not they are familiar with all ten iterations of the Doctor (usually termed "regenerations," though that seems off for the First Doctor). If you've enjoyed official BBC Doctor Who adventures, chances are you'll enjoy these, too—and it's one of the only ways you'll ever see ten Doctors together in one story.
Posted by Mike at 10:56 PM