This week's "Doodle Penance" is late because it had to wait for me to get back from MoCCA. (Don't get me started about the joys of flying out of JFK.) Usually for each week's Doodle Penance we comb through the search terms that led people to our website, find something that hadn't appeared on the site heretofore, and draw it as best we can, to satisfy the searches of subsequent googlers.

This week's search term of choice was "MoCCA."

Given where I was this weekend, I thought I could get some help with this one. Here are some doodles I collected from various cartoonists at MoCCA this weekend, illustrating the search term "MoCCA." 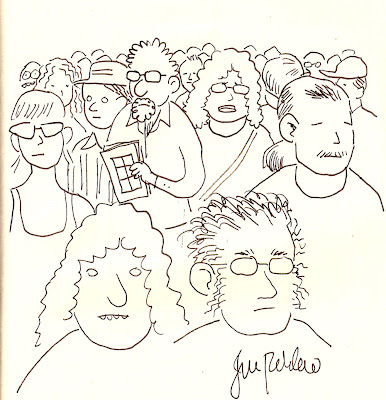 Jesse Reklaw shows us what the crowd looked like for most of the day both Saturday and Sunday. It was a busy show, and the floorplan in the new venue was really good for foot traffic. There really were massive crowds, and a lot of people means a lot of potential sales. I heard from many people that they'd sold a lot of books this year. Jesse had big piles of Ten Thousand Things to Do at the show. I hope he sold a lot of them. 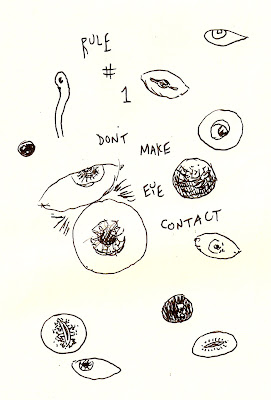 Jon Lewis offers one of the cardinal rules of attending small-press comics shows. When you're walking past someone's table, judge their work, not the desperation in their eyes. Jon had an awesome new book called Cultists of North America, and the Gods Who Regard Them. I'm not sure how you can order copies of that one, but I'll let you know if I find out. 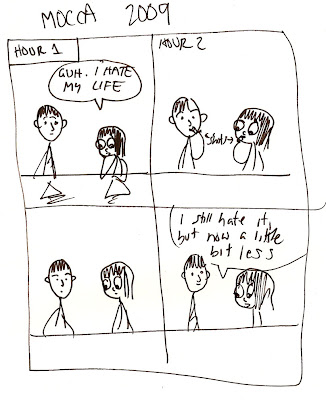 Julia Wertz, our editor for the I Saw You... project, offers one of the key rules for enjoying the MoCCA experience from the cartoonist's side of the table: 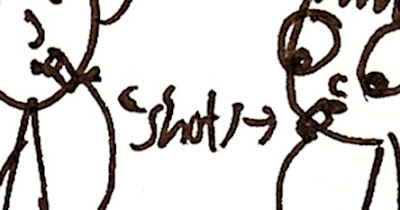 Julia was selling new copies of the second volume of Fart Party. 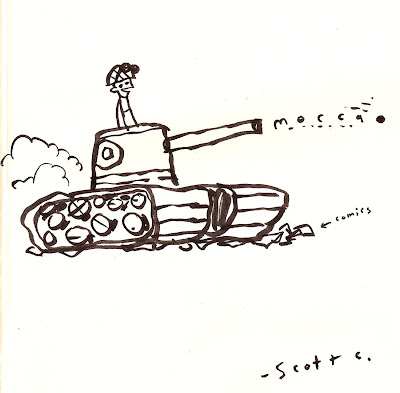 And Scott C. offered a good rule for MoCCA and for life in general: crush your enemies, see them driven before you, etc.

Of course, the most noteworthy thing about this year's MoCCA Festival was the new venue, the 69th Regiment Armory building at Lexington and 25th, which Calvin Wong (whose table was adjacent to ours) characterized as looking something like Thunderdome: 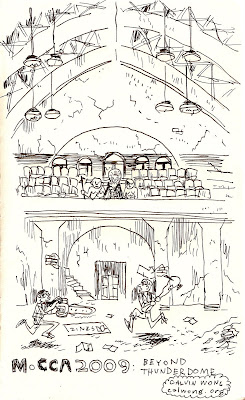 One main difference between the Armory building and the Puck Building was the cavernous size of the venue: all of the exhibitors were showing their wares in the same room. But even more notable, from an exhibitor's perspective, was the Armory's total lack of air-conditioning. By mid-day on Saturday, the room was tropically sweltering, and it didn't cool off overnight. The only water fountain in the building was broken, and all of the drink machines sold out before midday on Sunday. It was purgatorial. 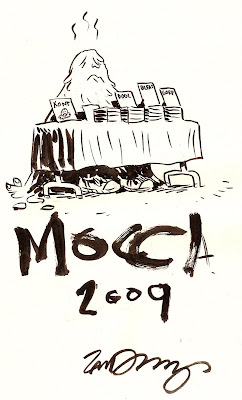 Zander Cannon calls it: the place was face-meltingly hot. 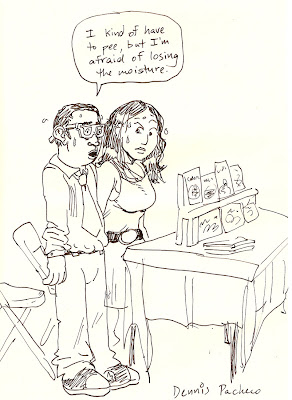 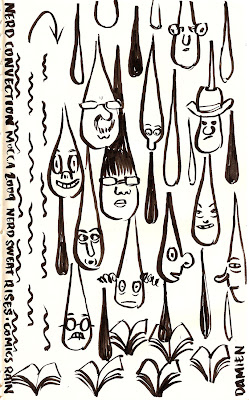 Damien Jay illustrates a commonly circulated theory, that eventually all the rising sweat would reach the three-story vaulted ceiling, condense, and rain back down as some kind of special nerd oil, anointing us all with New York City's humid benison. 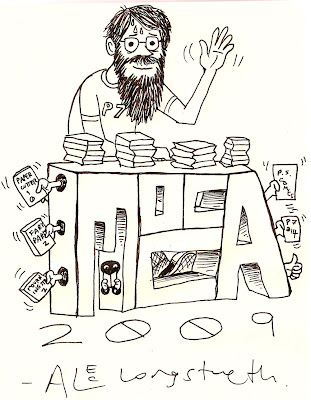 For Alec Longstreth, as usual, MoCCA was all about the comics. Looking closely at his doodle, you can see some of his picks for the most exciting debuts of the show: Julia's new Fart Party volume, the tenth issue of Papercutter, the second volume of The Mourning Star by Kaz Strzepek, Minty Lewis's new collection of P. S. Comics, and Alec's own new Phase 7 #014. They're all excellent books, and I am seriously excited to read the ones I haven't finished yet.

... But for many people, the "buzz book" news of the show was, without a doubt, the early-release copies of David Mazzucchelli's Asterios Polyp

that Pantheon brought to the convention. 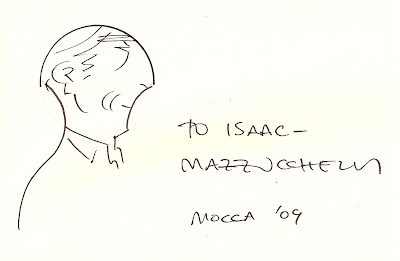 The book looks totally incredible, and absolutely worth the wait. If you weren't at the show, pre-order a copy.

When I explained the premise of "Doodle Penance" to some people, they were under the impression for some reason that we deliberately misinterpret the search terms that send people to our site. Of course, nothing could be farther from the truth, but that didn't stop Partyka's Matt Wiegle ... 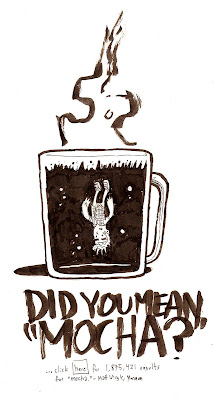 ... who was selling a totally fun new book called Monsters and Condiments. 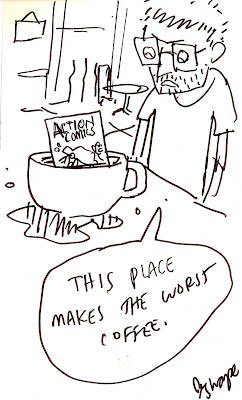 Our table-neighbor Sam Sharpe wrought a variation on a similar idea, demonstrating that Arabica and Action Comics #1 are two great tastes that don't taste great together. Sam had a new mini at the show, too, These Yams Are Delicious, which Zander Cannon pronounced "the best minicomic of all time," or something along those lines.

I keep using the first-person plural pronouns, and that's because I was sharing a table with a couple of other people: first, Mike's former student Cee-Cee Swalling, who provided this summary of her experience at the show...

The other person behind the table was our friend and oubapian ally Tom Motley, who seemed to get distracted toward the end of the day on Sunday... 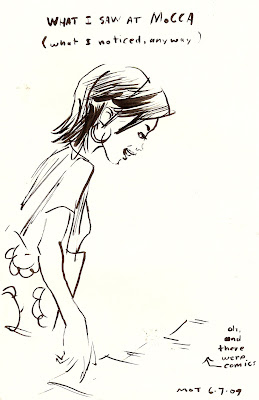 (For some reason, Calvin, Sam, and Damien's table seemed to draw a particularly cute crowd. I'm not sure how that works.)

Motley had a new issue of True Fiction called "Made Out of 'Mac,'" and I presume that it may soon be available in his store over at Squidworks. I'll let you know if I hear differently. 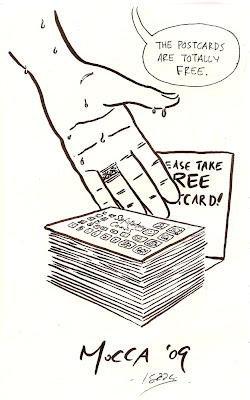 For me, in the end, the show was as much about giving away free postcards as it was about selling minicomics. If you came to the site because you picked up one of the postcards I was offering, I hope you'll stick around long enough to see our summer sale, which offers comics delivered cheaply to your door or mailbox.

As for Mike, well, that little piggy stayed home. 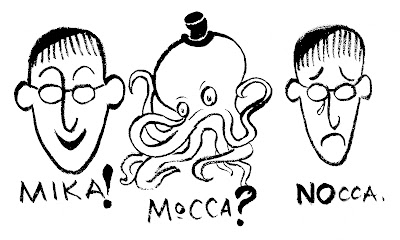 Poor Mike! But think of all of the sweating he saved himself! (Seriously, Mike, if you want consolation, read Evan Dorkin's post about the show.)
Posted by Isaac at 11:44 AM

Isaac, I'm going to add a tag to your post so that it's labeled "favorite posts." Man, that's a fine collection of sketches from divers hands! Quick reactions:

JON LEWIS HAS A NEW BOOK?!?!? Why wasn't I informed! Okay, that rockets to the top of my Must-Buy-And-Read list. (Also, nice to see the nonhuman eyes in his sketch.)

Is that YOU with the chainsaw in the Wong-penned Thunderdome sketch? And if so, does that mean the man with the barbed club is Mr. Wong?

Great titles on the comics in Zander Cannon's drawing.

My first thoughts on seeing the Mazzucchelli sketch were, one, envy (duh); two, disbelief that the line of Polyp's dome could be freehand. Clicking to enlarge suggests that it was in fact drawn with the aid of a compass.

I'm not sure whether I'm more pleased or dismayed to see that Cee-Cee has made what we might describe as a "Mike joke."

As for Dorkin's post, already read it. But thanks for the tip all the same.

Jon's new book is not comics; it's illustrated prose. Still, for Jon Lewis fans and completists (like us), it's obviously a must-buy. Better email him for purchase information. I don't think anyone is distributing it via web-based stores.

Also, I will point out that neither combatant in Calvin Wong's sketch has a beard.

Clearly, I was reacting to the clean-shaven image as the Platonic Ideal of Isaac, not the bearded reality which is so far from the ideal.

You will at least grant me that he's wearing a typically Isaac shirt and has dark hair and glasses...

I like the fact that you call it a "Mike joke" because I was NEVER punny until I started taking classes with you! Coincidence? I think not.

Okay: from what Cee-Cee has said, I truly do need to do penance. Ay de mi...

I should point out, Mike, that on Sunday Jon made a reference to "selfsame chicken."

That's after I spent ten minutes explaining that joke to Bill K. and Motley as we walked around downtown.

Right, the famous "joke" that prompted a friend of yours to give a name to "the Mike joke" as such; but the record will show that I was not even present at the making of that joke!