We are honored to be this month's guest artists for the Daily Drawings feature at the website of the Partyka collective, a group of talented and award-winning young artists whose numbers include one of Isaac's former students, Shawn Cheng (The Would-Be Bridegrooms; The Monkey & The Crab), and Shawn's college pal Matt Wiegle (Seven More Days of Not Getting Eaten; Is It Bacon?). You may have seen their drawings of Isaac himself for the postcard announcing his 2008 move to Vermont, but you are hereby urged to see some of their other drawings as well, as featured on the Partyka website or in some of their beautifully rendered comics.

The Partyka site doesn't just showcase the work of its members; for years, now, it has also featured the work of guest artists, fellow travelers in the worlds of comics and drawing. Our contributions this month feature a typically collaborative approach with material that is somewhat more haphazard than usual. Our series of images, called Satisfactory Lecture Doodles, began with a selection of doodles that we absent-mindedly sketched into our various notebooks during classes, conferences, and meetings during grad school and after (which of course meant we had YEARS of material to draw from). Please note that none of these images was intended for later viewing, not even by each other; indeed, I think some of them predate not just our collaborative interest in comics but our very acquaintance. Each of us then sent his own favorite doodles to the other guy to color digitally. The titles of the finished color images reflect the original circumstance of the particular doodle; thus yesterday's drawing, which you might think is called "Terrible Threat!", would appear in the catalogue as "Plenary Lecture."

Keep checking in on the PARTYKA website later this month for further thrilling images such as "Driving Directions" and "Modern American Literature." And for your convenience, here's a glimpse of the first image, the unforgettable "Faculty Meeting": 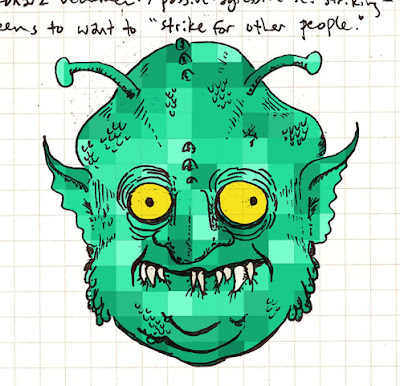 (You can also check out some later images in the series by clicking the first link in this post, but where's the fun of that?)

PS: And while you're here, don't forget our BIG SUMMER SALE, featuring both comics work and sketchbook projects by this month's Guest Artists at PARTYKA.
Posted by Mike at 10:55 AM

Congrats! You guys are all over The Internets these days...