We had some pretty good options for Doodle Penance this week, like "comics thesis without tear" (if only that were possible!), "hellboy craig parody," "''matt wiegle' cute," and "where can i get a mickey mouse t-shirt were mickey's face is a skull." Lots to choose from! And somehow we settled on "rob rockley."

I'm fairly sure that the page this anonymous googler landed on was the post in which I showed my sketches of the characters in Tom K's Mapjam story, whom I'm planning to use in my own story for the third round of the Mapjam.

I gave the three characters punlike names, which you'll catch if you read them out loud to a vegan in your grocery store's produce section.

As it happens, I've been thinking about the Mapjam more this week. I've been stealing a few minutes here and there to work out a new script and set of thumbnails for my story, since I've neglected it for almost two years now. I figure that if I draw a little bit on it every day—even if it takes me a month to draw a whole page—I'll have a story ready before the end of the year. Mostly I've been trying to figure out the look of the girl I'm calling Delilah, and her Paw, who doesn't appear in Tom K's story.

But hey, why not do a little pinup of Rob Rockley, the beefiest of the muck deacons? 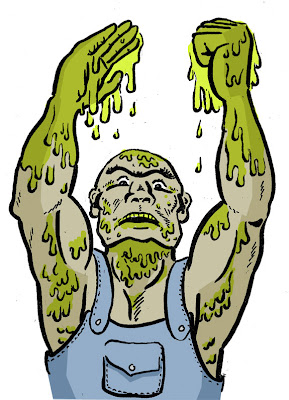 Mike, can you tell me which cartoonist I was thinking of while I drew this? And what have you got this week?

—Hmm, Isaac, hard to say. That guy looks so much like Tor Johnson...Maybe you were thinking of Eric Powell of The Goon? Nah, that's probably just the overalls...I'm not sure. Sorry. 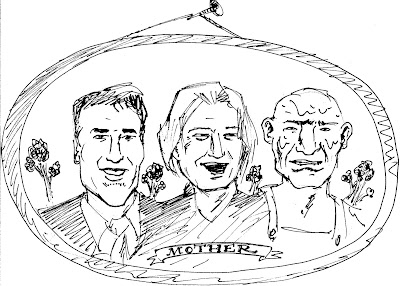 In time, I did remember all by myself that "Rob Rockley" was your name for the figure on the far right, with a design by Tom K; but first my mind turned to similar-sounding figures like Rob Riggle (far left) and Bob Rock (middle); so here's a doodle portrait of the three of them joined at the torso, with stalks of raw broccoli in the background. Something about the finished three-headed bust made me think of a family photo, hence the frame and label.

And that's all I have to say about that.
Posted by Isaac at 3:45 PM

Isaac has asked me to bring to the comments his revelation from email that the cartoonist he was going for with his doodle is Roarin' Rick Veitch. In truth, I had myself thought of Veitch when I first saw the doodle, then forgot about him while composing my part of the post in great haste. Sorry, Kaiser!