Here's a version of Klinschor, yet another character from Wolfram von Eschenbach's Parzival: 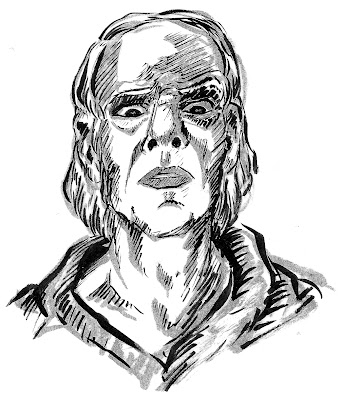 His name appears as Clinschor in the manuscripts, but it's commonly spelled with a K in modern German, so that's my excuse for drawing him this week. Fair warning: this will not be the last time I use spelling variations to fudge my way through the Arthurian alphabet! (And incidentally, on the subject of names: Richard Wagner further changed Klinschor's character, his role, and his name in creating the part of Klingsor for his opera Parsifal; a final change for the wizardly knight came with his transformation into Corporal Klinger in M*A*S*H*. Ha, I kid! Moving on...)

Klinschor was a knight and Count of the Terra di Lavoro in Italy, but he had the misfortune to be castrated by his lover's husband. (Nevertheless, the part of Klingsor in Parsifal is sung by a bass.) Thereafter Klinschor turned to the arts of magic and created threatening traps for other knights in his Castle of Wonders (Schastel marveile), until the spells therein were defeated—or at least survived—by Gawan (Wolfram's version of Sir Gawain / Gauvain).

The technique this week is a bit of an experiment. I did a very quick pencil sketch from life, as a guide to the shadows, principally; then I put down the vellum and attempted to ink the image with a minimum of outlines, hoping to build up the shapes out of hatching (not unlike the way John Totleben might ink, though very unlike his way in the care taken and the effects achieved): 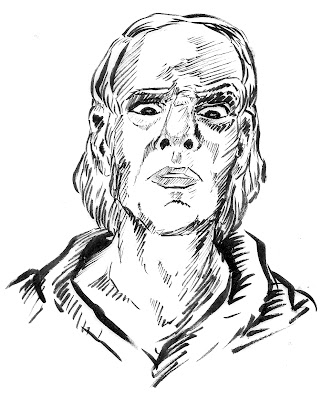 That turned out okay, but it lost a lot of the shadowy contrast I'd been hoping for. So I tried again by inking the pencils directly with a bias toward direct black and white opposition instead of gradations of shade (though not exclusively, as you can see below): 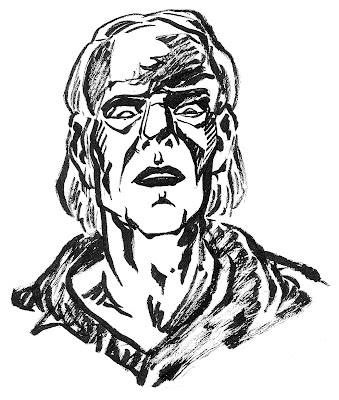 I liked that one better, overall, but just for fun I decided to lay the vellum over the original inks and see how that composite would look when scanned. And lo, that's how I got the version I submitted to Alphabooks and that appears at the top of this post. Not exactly the best of both versions, but I think the overlaid image is more interesting than either of its layers alone. And to spare you any scrolling up for a recap, here it is again just before the post ends:

Next week: a foregone conclusion for the letter L...
Posted by Mike at 4:36 PM