This week's "Doodle Penance" post originates in a search that I've seen a few times in our Google logs: "new haven postcards."

And, to tell you the truth, there's already a perfectly adequate post on the site here about postcards of New Haven. I still have batches of them for sale, too, if you want some. But apparently that didn't satisfy this Google searcher, so we're going to draw some more.

So: if you've driven up Whitney Avenue in the past couple of years, you may have noticed that Yale has installed a life-size sculpture of a torosaurus outside of the Peabody Museum of Natural History. It's really pretty cool. 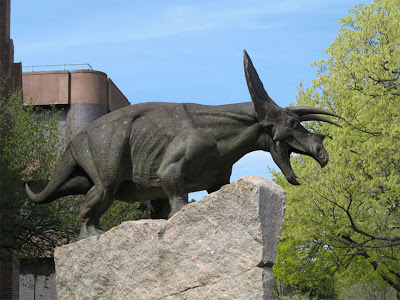 What you may not realize is that every year on October 29, zealous Elis adorn the torosaur with a nude male mannequin: 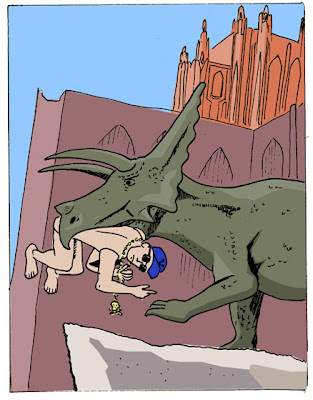 The mannequin usually stays in place until some time in the afternoon of October 29th. Police and museum officials have been lenient about the running gag, chuckling that a college just isn't a college without a few traditional pranks.

Edit: I couldn't resist tinkering a little with the color in my doodle. This isn't much better, but it does at least get the background to recede a little bit. I encourage anyone with better color sense than me to tell me what I did wrong with this drawing. Click to enlarge; leave a comment down below. 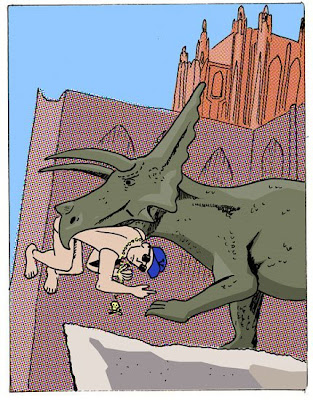 Mike, what have you got?

—Well, Isaac, I thought I'd contribute an image of one of my favorite spots in New Haven, the banks of the Mill River near the Orange Street bridge. The missus and I took frequent walks down to this calm oasis at the end of our neighborhood, and we loved that a mere twenty-minute stroll could bring us to a spot where it was possible to see nary a building nor a wire (though the sound of the nearby streets was always audible).

Of course, we also had to be careful on our walks owing to the occasionally unruly animal life. I once got bitten by a dog (prompting Becca to shout indignantly to its owner: "Your dog bit my husband!"). More worrisome, though, was the genuinely wild life, such as the most famous denizen of the lower Mill River; of course I mean Millie, the New Haven Crocodile: 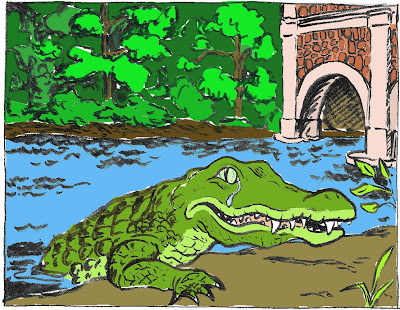 While Millie could indeed be fearsome if caught unawares (or hungry), she was as much to be pitied as feared. No Connecticut native, this creature belonged in the Africa from which she hailed and for which she pined (that tear should show how much she misses the Nile). I myself am no native of the Elm City, but I do catch myself pining for it on occasion, huge reptiles and all. And with this living relative of your statuesque torosaurus, I conclude this postcard salute to New Haven!
Posted by Isaac at 12:19 AM

That's a very sweet tribute to an old (and unpublished) poem of mine, Mike. You win this round, for the nice gesture and the gorgeous color work.

As you so often remind me, it's not a contest! But it was a real pleasure to seize the opportunity to illustrate one of your most charming poems.

Meanwhile, your post goes to show how much of New Haven I must have missed in my distracted seven years there. How did I miss the mannequin every October 29? I walked by that museum almost every day!

Well, you know, the torosaur wasn't even installed until September 2005. It's possible that the tradition hadn't started yet when you left town. I don't remember whether the dino got its fake treyf morsel the first year it was up.

I tried to buy some postcards from you on paypal a couple of months ago, but have seen nary a card. perhaps my money got lost in the tubes.

That problem was caused when I switched email addresses and didn't update the Paypal buttons on the site. I caught all the ones for backissue comics a little while ago, but your note just made me realize that I hadn't updated the buttons in the post for the postcards.

They should be fixed now. If you still want some New Haven postcards, try using the buttons to order some now. (You should just cancel your other payment, which won't ever get claimed, because I don't have access to that @liu.edu email address any more.)

Sorry for the mixup!