Doodle Penance: "one adaptation of our critter"

This week's "Doodle Penance" comes from a googler who wanted to see "one adaptation of our critter."

I thought, "That seems like a very specific request. Only one adaptation? I guess I should pick the most important one." Of course, I was wrong in my initial understanding of the search, but before I get to the right results, let me show you what I came up with before I realized my error.

Have a look at this repugnant and disgusting extraterrestrial monster, previously seen in Lewis Trondheim's uncanny and upsetting A.L.I.E.E.E.N. 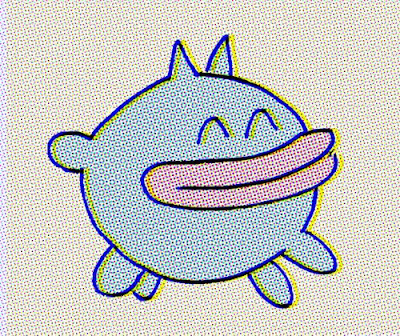 You can also take this abhorrent little critter for a walk in a game on Lewis Trondheim's website. (Trondheim's site is in French, naturally, but you really don't have to read it fluently in order to complete the game.)

Well, if you look closely at this despicable monster, you will see that it's mostly head and mouth: there's not a lot of room in that body for internal organs. Here, let's have a look inside. 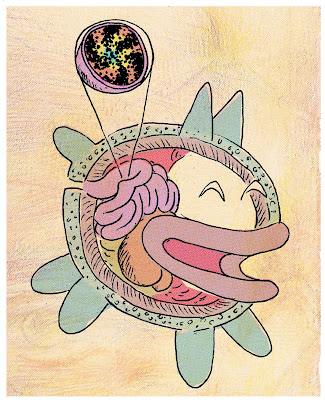 Notice how this critter's guts are all scrunched up and packed together at the back of the balloon that is its body. There's not a lot of room for digesting back there, and yet the critter lives on some pretty indigestible stuff. That's why this species has developed an inter-dimensional intestinal shunt sphincter, which is pictured in the blowup of the diagram. These nasty little monsters do most of their digesting in the Negative Zone, the Phantom Zone, or some other alternate dimension.

It's a handy adaptation for these little alien vermin, but believe me, if you accidentally reverse the transport polarity of that sphincter, you'll be in for a nasty surprise.

... Anyway, that's what I originally thought our Google-searcher was looking for. But then I realized there might be a better explanation for the unusual specificity of the request. That's because I remembered about Our Critter, a little-known sentimental novel from late nineteenth-century Appalachia. (It's out of print now, so I can't link to it on Amazon.)

I did a little internet research of my own, and discovered that Our Critter has in fact been adapted in several forms in the twentieth century. There's a rollicking Tin Pan Alley ballad that tells the story, an early silent film that shows some of the climactic scenes, and a stage melodrama that apparently adds a new star-crossed romance subplot for the critter. I hear there was even a novelization of the melodrama. And of course Jon Lewis has been working on a comics version of Our Critter for six or seven years now.

The only adaptation I could find an image for, however, was a children's musical, apparently based mainly on the Tin Pan Alley ballad. It's commonly performed in rural elementary schools. 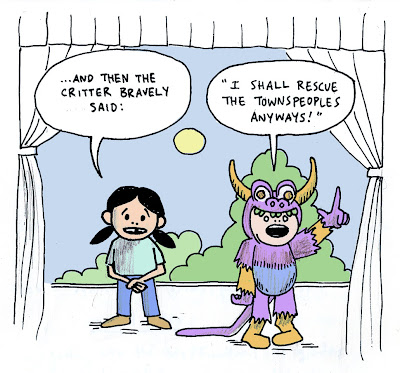 Mike, what did you come up with?

—Well, Isaac, I usually learn something from your contributions to "Doodle Penance," and today is no exception. I'll have to keep an eye out for other Our Critter ephemera!

But since I was ignorant of the Our Critter phenomenon, I assumed the searcher was interested in one of our critters—yours and mine—from the motley menagerie of the Satisfactory Comics line. And after the Darwinian discussions of two weeks ago, I assumed that "adaptation" was indeed to be taken in that A.L.I.E.E.E.N.ian sense, as referring to a biological change to help the critter get along better in its circumstances.

And with that in mind, I thought that perhaps the best such adaptation was the opposable thumb—or, as modeled here by the marsupial Walter from Satisfactory Comics #4, the opossum-ble thumb: 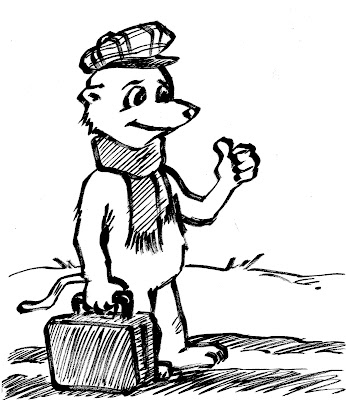 With his opposable thumb, Walter can both grasp the handle of his suitcase and make the hitchhiker's signal for passing cars on the roadside. These skills may help him avoid the all-too-common fate of so many of his possum kindred on our nation's highways.

A less successful adaptation can be seen in the jumbled-up features of this toucanagram from Satisfactory Comics #1: 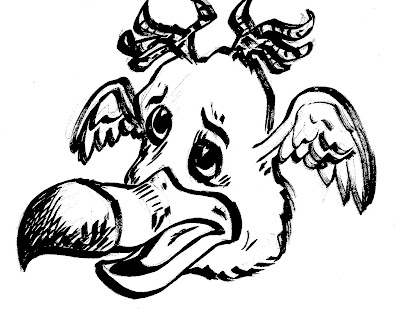 Apparently, this critter wanted to emulate the ability of bats to dangle from their perches, but instead of just learning to live upside-down it shifted its feet to the top of its head—awkward! As if that weren't bad enough, it turns out that bats are xenophobes, so whenever the toucanagram seeks out a likely cave it gets shooed away by the crass chiropterans, having to settle for a perch on the underside of a tree branch, where it dangles like a sad fruit. Perhaps the poor critter needs to take a walk with the abhorrent little critter on Trondheim's website!


*By the way: props to Ben Towle, Adam Koford, and (through Ben) Les McClaine, for tips on making pseudo-Benday dots with Photoshop, or "How to Color Like a Little Old Lady in Bridgeport."
Posted by Isaac at 10:22 AM

You win big time this week. I shoulda known not to take you on at your own Darwinian game! But really, I am double impressed since I actually mistook your drawings for Trondheim's. Your imitations are pretty darn convincing! (The Benday dots helped, of course.)

But to say that my drawings passed for Trondheim's is high praise indeed! Thanks! My admiration for that guy has only been growing as I read the translations of the Little Nothings.

Wow, there's a real "Our Critter." Who knew?! Were I at bat, I might have used the character Critter from the awful film "The Girl in the Gold Boots."

Great job on the Trondheim images, Isaac. Like Mike, I thought they were actual Trondheim illos at first.