Pogo at the Center for Cartoon Studies 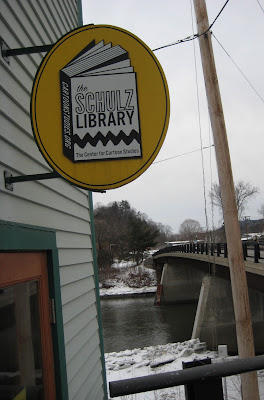 One nice thing about being on spring break is that it frees me up to do some of the sorts of work I don't have time for during the regular workweek. For example, today I took a drive down to the Center for Cartoon Studies in White River Junction to give a little guest lecture in Steve Bissette and Robyn Chapman's "Survey of the Drawn Story" course.

This week's class was on the subject of autobiographical comics, and I brought in a few images that I thought would helpfully complicate the easiest or most straightforward way of thinking about autobiography. (In essence, I was trying to suggest that although a lot of people think autobiography is about "expressing your true self" or "getting yourself onto the page," it's actually much more a question of telling interesting stories, just as fiction is, and that this requires a certain distance between the writer as narrator and the character or person being written about—a kind of retrospective awareness of the difference between present and past selves.) Here's a six-panel picture of that, from my lecture slides. Please click to enlarge this clever sequence from Eddie Campbell's After the Snooter: 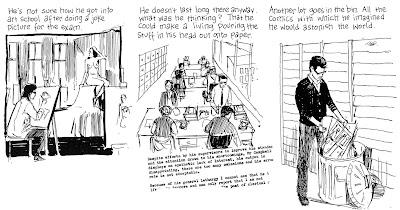 (Those images really aren't formatted for the blog, are they? They looked better in Powerpoint. Really, please: click to enlarge.)

Anyway, the class was a lot of fun, and discussion after my talk got pretty interesting. It's always cool for me to go down to CCS And meet the new crop of cartoonists there, because I'm always sure some of them are going to draw great things in the next decade or so.

And look what smiling, happy, interesting students, even after three hours of lecture about comics arcana:

(Again, click to enlarge, so you can see Steve Bissette way back there in the back, on the left.)

But I wouldn't drive all the way to White River Junction without taking in the sights!

Actually, the drive was beautiful this morning: the trees and mountains were still frosted like a gingerbread house from a snow we got a couple of days ago. And to tell you the truth, I have so much fun when I'm at CCS that I probably would drive down for no reason other than dropping in on a class. But there were sights to see.

For example, no one should visit White River Junction without doing a status check on Alec Longstreth's Basewood Beard. Here's what Alec looked like at lunch today: 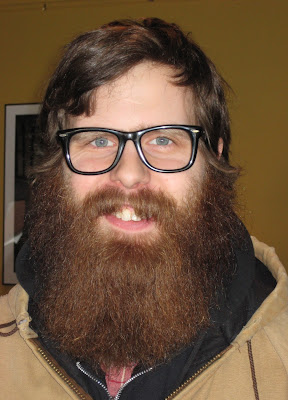 Alec gave me the new issue of Phase 7, which is a travelogue about his trip to Angoulême this year. I'm halfway through reading it, and it's good. If you're comics-curious, you owe it to yourself to check out a few of Alec's comics. He's for real.

But the thing that got me wanting to drive down to White River Junction in the first place was an exhibit at CCS (closed to the public now, but Robyn let me have a peek) of Walt Kelly Pogo strips from the collection of Garry Trudeau.

Prepare to be envious, Mike.

It's a nice exhibit, though sort of small one—there are less than thirty strips up, but I didn't count them. (Maybe it's more like twenty?) I learned a few things right away. For example, I never knew that this old joke, which I probably got from my wise-ass uncle, is originally a Pogo joke: 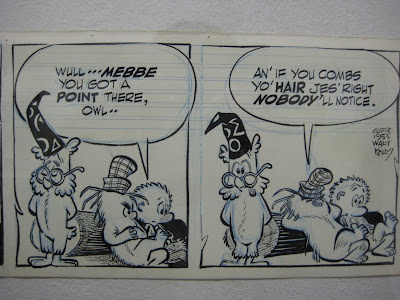 By the way, you can click any of these pictures to enlarge it, as usual, and in some cases that'll mean beautiful scrutiny of Walt Kelly's linework or lettering, so you may enjoy doing that.

I also enjoyed looking at Kelly's pencils. Since he penciled in non-photo blue, his pencils are still there on the board, under the ink, for anyone to see. It's interesting to see panels where he clearly reworked poses or action a fair amount before inking: 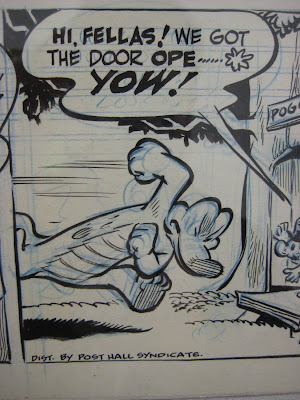 And it's also interesting to see how much more compact than his pencilled dialogue his finished lettering sometimes turned out to be: 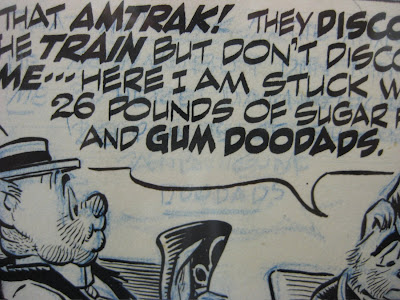 It was also interesting to see the character designs in a strip from 1948, before Pogo and Albert and friends had settled into their more familiar appearances. 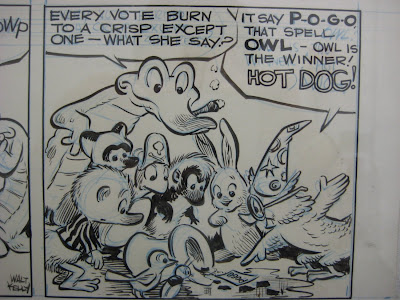 But mostly it was just nice to soak up a little of the master craftsmanship. I'll post a few images (mostly of Churchy) without further comment. 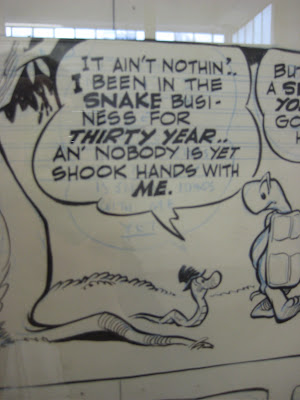 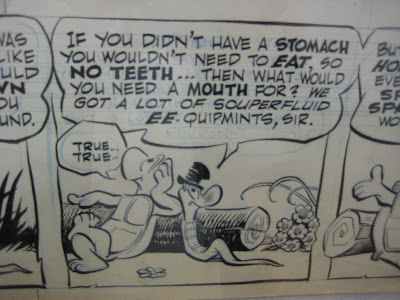 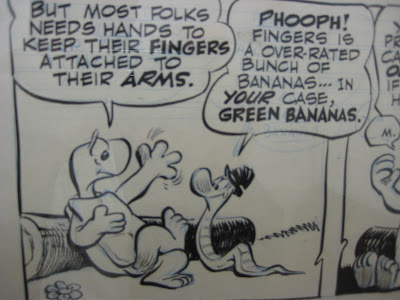 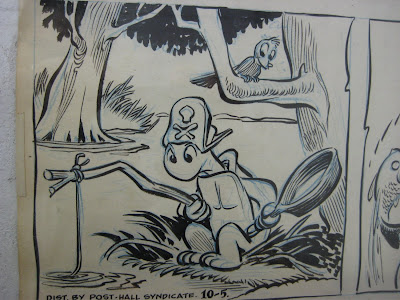 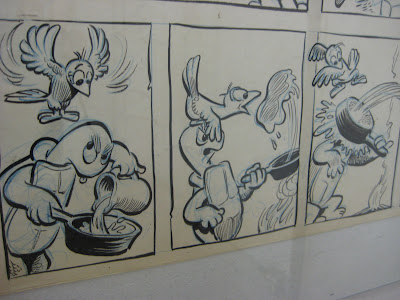 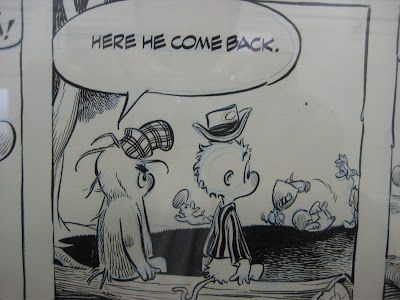 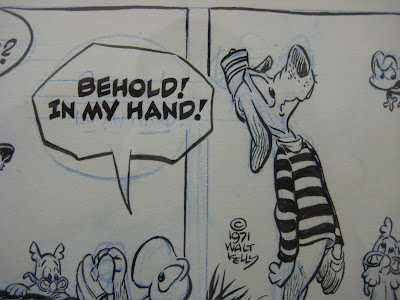 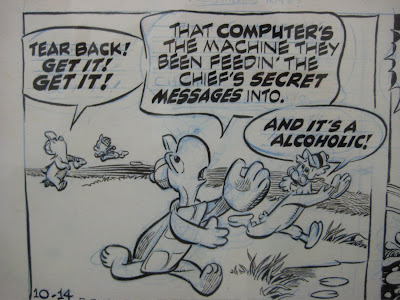 Thanks to Robyn Chapman, Steve Bissette, and the people at CCS for the invitation! I'm always glad to drop in down there.
Posted by Isaac at 9:43 PM

I'm going to have to edit your post to add the label "FAVORITE POSTS."

Bee-yoo-tiful! Many, many thanks for documenting this for my faraway eyes. I've read most of these in reprint form, but I love seeing them at such a large size with the blue pencil.

And I've been quoting Porky's line about the pointy-headed Howland since I was a tad.

"this requires a certain distance between the writer as narrator and the character or person being written about—a kind of retrospective awareness of the difference between present and past selves.)"

I wish you'd been able to somehow retroactively give this lecture to last year's crop of autobio/memoir graphic novels.

I've read a ton of autobio and memoir from 2008 in preparation for the Eisner awards nominations and the bulk of it is truly mediocre, suffering from a lack of exactly what you describe in what I've quoted above.

A few folks seem able to achieve the "distance" you refer to in almost real time, but in 99 out of 100 cases, what's needed is TIME. Why cartoonists feel that 35 is the perfect age to write a memoir is beyond me!

I think it's possible for a 35-year-old to be perfectly retrospective or reflective about his or her childhood—and I think Mike Dawson's Freddie and Me, for example, achieves this nicely. But I would not want to read most people's "How I Spent Last Summer."

Although, come to think of it, even those sorts of stories can be interesting if they're very well cartooned (like Carnet de Voyage, which I'll admit I've only read once) or written by someone you know personally. (Alec's Angloulême travelogue talks about something that happened a few weeks ago, but I enjoyed it because I think Alec and Angloulême are both interesting.)

At the talk, I held up Jesse Reklaw's Ten Thousand Things to Do as a diary (really not a memoir at all) that I read for those reasons: if I didn't know Jesse, I'd probably be less interested in the minutiae of his work routine, his back pain, his alcohol consumption, his insomnia, etc.

Apparently I practically have a whole other post about this in me. But I've got other stuff I should be working on tonight...