I might have shot myself in the foot with the challenge of this week's "Doodle Penance." You see, people found the site by way of some very interesting search terms this week, and we couldn't really make a good choice between "Superheroines in jumpsuits," "Tintin's ontological meaning," and "Christian LARP."

I mean, how could you decide between those terms?

My proposed compromise was to draw all three at once. Alas, you'll have to click this image to read the dialogue. 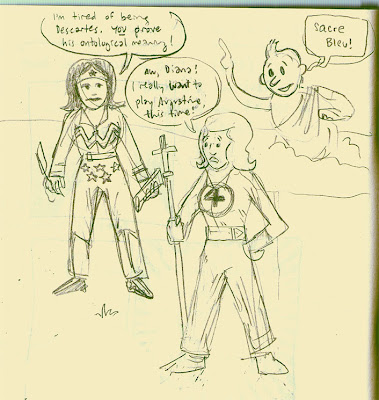 I don't think I've handled it very well, but I don't have time today to improve on that.

...Well, I didn't have time to improve on that on Sunday, either, which is why I'm finishing this post on Tuesday! Plus, I had an idea that I thought would look neat and didn't want to rush it, exactly, though you tell me if this cuts the mustard. I just went for two of the options, "superheroines in jumpsuits" and "Tintin's ontological meaning." Here's what I got: 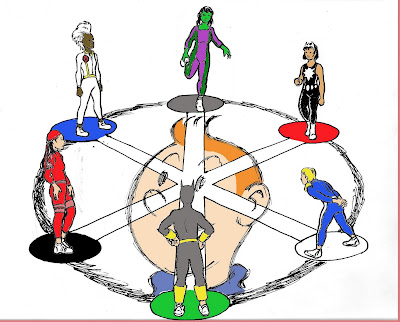 Perhaps a word or two of explanation is in order. Since Tintin's ontology is basically visual—he's a cartoon—I wanted to represent Tintin as a kind of exemplary case of a cartoon made up of the primary visual elements of contrast and tone. For contrast, Tintin would be sketched out of marks on a spectrum of hues from black to white, with grey at the center. For tone, rendered in terms of the primary colors of light (and of a computer monitor, where this image will be displayed), that means Tintin would be made up of red, green, and blue, and combinations thereof.

Therefore I have set an image of Tintin's diagram-like face at the hub of a series of spokes radiating out to discs whereon stand superheroines who represent these colors in their costumes (or, in the case of She-Hulk, in their pigmentation). I went with three Marvel and three DC superheroines (or, well, female athletes dressed in jumpsuits that loosely resemble the superheroines' costumes—I'm not convinced these women are those superheroines themselves). I wanted to stick with mainstream, familiar superheroines for the most part, but somehow I still ended up using the Kimiya Hoshi version of Doctor Light (because I needed a superheroine in a mostly black costume, and I'd already been reduced to using Storm's white costume). Also, if I'm honest with myself I would admit that I went with RBG instead of red, yellow, and blue as the primaries because I couldn't think of any appropriate yellow-clad superheroines. (Isaac has since suggested a couple, but they were even less familiar to me than the female Doctor Light.)

Anyway, that's my doodle. I'm not sure what its ontological meaning is, but by gum it features what look like superheroines in jumpsuits, apparently warming up for some sort of weird track meet. Was this drawing worth the delay? Was it worth drawing in the first place? And must penance itself be a reason for penance? Perhaps only a Christian LARPer can answer that last question.
Posted by Isaac at 8:20 PM

Dude, it looks like you owe me some Christian LARP.

Hell no! If I may quote from your instructions sent Saturday night and Sunday:

"Let's go for a double (or a triple). Let's have superheroines in jumpsuits AND chirstian [sic] larp and/or tintin's ontological meaning."

Emphasis added! Furthermore, from a later comment you sent:

"My recommendation: if you're going to draw all three things, draw them separately, or in combinations of only two."

May I draw your attention to the IF in that statement?

So, not gonna do it. Until the day comes when we decide to conclude the Doodle Penance series, at which point I will go back and create a single über-doodle featuring all the penances I have failed to complete, whether in whole or in part.

Hey, yeah, you know — don't you owe me "fun things to draw comics on" and "rorschach mask pattern sewing," too? I mean, "Don't you owe them to our readers?"

Nah, I'm only kidding, buddy; you're all right.