Well, it's entirely my fault that the expected Doodle Penance for Sunday last is going to be a couple of days late, but there have been extenuating circumstances. Moreover, it's ALMOST ready to go--but not quite.

In the meantime, I offer this old doodle from ca. 2000-2001. It's from an abortive project that was one of the first attempts between Isaac and me to produce a collaborative comic; indeed, it may have predated Satisfactory Comics #1 and our independent minicomics, though I can't recall for sure. As should be plain from the image, it was a goofy superhero story. What might need explaining is that the superheroes were all versions of our grad school colleagues, teammates on the League of Graduate Heroes; this guy's superhero identity was Boy Genius: 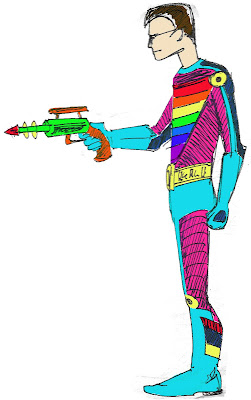 The thing is, his real-life counterpart was also already known as Boy Genius before Isaac and I got the cartooning bug. Various members of the class ahead of mine had code names like "The Little Colonel" and "Sunshine," and "Boy Genius" was just another one of those. Isaac and I made up a few new nicknames for some of our other colleagues, strictly for comics purposes and never used IRL. And we refrained from casting ourselves as heroes, though somewhere I have a doodle of Isaac summing up the would-be comic's plot, much in the way that Stan and Jack would occasionally have a walk-on appearance in the Fantastic Four (and yet, how different...).

At any rate, this doodle from almost a decade ago seems in keeping with the doodle I ended up doing for the latest Doodle Penance, as will be evident when I finally post it...and, come to think of it, it's not out of keeping with the last post offered in penance for a tardy Doodle Penance.
Posted by Mike at 7:23 PM

I think we had that dopey "League of Graduate Heroes" idea in the late spring or summer of 2001, which would have put it a little bit earlier any of the comics we actually drew, but later than the book of clerihews. The clerihew book was our first self-published collaborative endeavor (with help from plenty of other people).

That's kinda what I thought, but thanks for confirming / clarifying.

And yeah: it was a dopey idea. Got some good doodles out of it, though!

Yeah, I'll post some of those some time. I've found a few of them and cleaned them up for display...

Say, why be shy about identifying Jason Shaffer? Doesn't he have a sense of humor about such things? If we can out Matt Giancarlo as a lycanthrope, surely Jason won't mind showing up in his secret-identity togs on an obscure little corner of the internet like ourn.

(If nothing else, it will keep people from thinking we went to grad school with Stephen Colbert's Rainbow-Colored Twin.)