I'm in a big hurry tonight, so although this week's "Doodle Penance" derives from a search for "manga fleas," I've taken a bit of a shortcut. Figuring that Mike would also be drawing at least one Manga Flea, I have only drawn one Manga Flea myself. 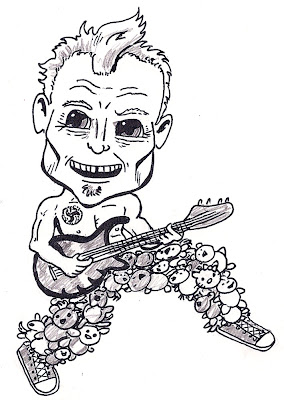 I really don't like drawing in a manga style, and I am not even going to pretend that this is an approximation of any real manga styles. It's really not my bag. Also, I am not much of a caricaturist, so I can't make any claims that this looks like the original.

Mike, I leave it to you to to display and explain your own doodle, per our usual practice.

—Isaac, that could be manga, maybe: it's got huge eyes, spiky hair, and Hello Kittys stuck all over it. It's manga enough.

Me, I decided to go with the bloodsucking variety of flea (though yon bass player showed up on the Google Image search along with the parasite, unsurprisingly). Here's my manga flea: 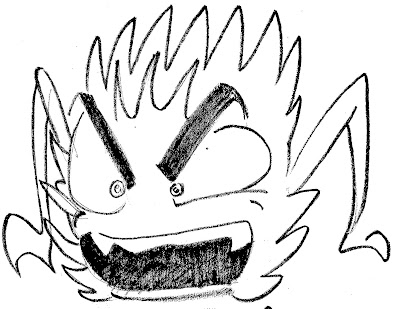 I had had grandiose ideas about drawing a whole slew of manga fleas in a variety of styles, since I own manga from such diverse artists as Osamu Tezuka, Goseki Kojima, Hajime Ueda, Keiji Nakazawa, and others, but since Isaac told me he had tossed out his doodle really quickly I figured why bother. Now I see that his quick doodle is a lot more elaborate than mine. But mine is at least based on an image from a genuine manga-ka, the great Rumiko Takahashi, because this is the image I flipped to at random when I opened the first book from my big stack of manga, a Japanese original of volume 34 of Urusei Yatsura: 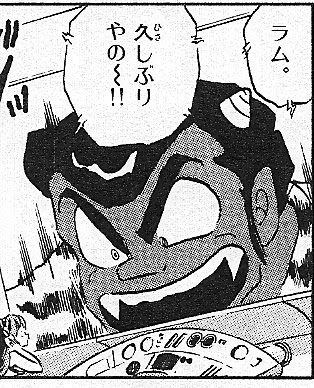 So okay. There's a little genuine manga drawing for you. And since Lum there (cowering in the lower left-hand corner) has cat ears, maybe she has reason to watch out for manga fleas. Mrrrow.
Posted by Isaac at 7:32 PM

I should point out that although I snuck in one Hello Kitty, Flea's stuffed animal pants are a real wardrobe decision, not some sort of manga affectation.

Those are quite the links. I was about to make some remark on the lines of "People sure make odd choices in their lives," then I remembered the context of this comment and thought I should shut up already (this is already the 29th post to merit the "Doodle Penance" label already: six months of it!).

Those pants are by no means the most unusual costume that Flea has performed in.

I believe "rock out with your cock out" was an unofficial slogan of sorts for the early RHCP for a while.

Now, if only someone performs a search for "chibi Anthony Kiedis."

Personally, I'd hold out for Bigfoot Bootsy Collins.

Thanks to your comment, B.B., I now know more about Dragon Ball than ever before. Which isn't saying much...